Can someone explain to me why Subway will put chips, soda, milk, juice boxes, and Gatorade out in the open where you can easily get to them, but then hoard the fucking napkins behind the counter and dole them out like they’re bars of platinum or something? Look, asshole, just making the sandwich got meatball marinara all over the condom/gloves you wear to keep from giving me the Herp. And I’m gonna eat that fucking thing. So give me more than one fucking napkin before I have to tell you that “sandwich artists” aren’t really artists at all and ruin your fucking day.

I mean, look at your spokesperson, Jared. Yeah, he was a big huge blob, and you can’t blame him for that. I mean it’s his metabolism, I’m sure, and not a case of lazing around all day while renting out porn. So he ate healthy at Subway and lost a lot of weight. Good for him. But he still has that fat guy face, and I can guaran-fucking-tee you that when he eats there, he needs more than one napkin to wipe the turkey grease of his goddamn mug. I bet you that he has chunks of pastrami affixed to his chin that could feed an entire Somali village.

And what, exactly, do you think is going to happen if you give your customers unfettered access to napkins? If shitholes like Taco Bell can do it, so can you. You’re selling food that people actually want to eat. Taco Bell has the notable disadvantage of featuring a menu that was scrounged up from a Mexican trash heap. (Full disclosure: I used to love eating Taco Bell until my plumber told me my toilets couldn’t handle that kind of abuse.) But you’ve got some dickhead up at corporate thinking… What? I honestly don’t know. 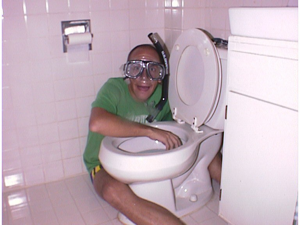 That's assuming there's any thinking going on at all. Here is a picture of the CEO of Subway. (Lawyers note: Not really)

Dickhead Executive #1: Dammit, no one is leaving this room until we figure out a way to save some money so that I have an excuse to give myself a bonus large enough to buy a gold-plated hot tub!

Dickhead Executive #3: Yeah, the “starving artist” angle was pure genius, but the Feds told us we couldn’t pay them just $0.42 an hour.

Dickhead Executive #4: Wait, we’ve got like millions of customers, right? If we limit them to one napkin a piece, we’d save tens of thousands. Hundreds of thousands, maybe.

Dickhead Executive #1: That’s brilliant! For having such a great idea, you may attend the inaugural hot-tub party. But you have to bring the blow, wear a bikini, and let people snort lines off of your ass.

You know what I’d do if I was a woman (aside from stay home and play with my boobs all day)? I’d help the cause by putting boxes of sanitary napkins out in the open for customers to use. They gotta use something, right?