Due to a string of unfortunate events this weekend, I wound up watching Bridesmaids with my wife last night. That was two hours and twelve minutes of unfunny that seemed to last at least ten times that long. Holy crap, did I not like that movie. Every time something interesting or funny threatened to happen, women wound up drinking coffee and discussing their emotions. Towards the end, I found myself hoping that earthbound NASA satellite would plunge through the roof and take my head clean off.

This, I realize, is a typical guy reaction to a chick-flick, and ladies, if you found Bridesmaids to be hilarious and touching, more power to you. But I would insert a glass rod into my junk and shatter it with a ball peen hammer before I’d willingly see that movie again. On the positive side, I earned some brownie points with the wife and can pretty much make her watch anything I want, even if it is Rocky VIII where Rocky fights an Alien on a prison ship orbiting Alpha Centauri after he loses his manager (Sigourney Weaver) in the crossfire of a Predator/Transformer battle. And the round card girls all have 3 tits, like in Total Recall. (I’ve got to polish off that script and send it off to Spielberg.) 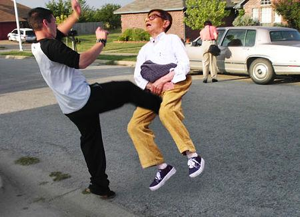 And now, on to what happened this week while you were cowering in fear and hoping that the C.H.U.D.S. wouldn’t find you:

Speaking of Gatorade, reader Jennie Jackson got me thinking about what would happen if you snorted Gatorade powder. My initial hunch was that it would be harmless like snorting sugar. But then I remembered how you’re not supposed to drink Gatorade if you’re extremely dehydrated because it can get your electrolytes out of whack, and I began wondering if snorting Gatorade powder is such a great idea after all. You will be happy to know that I then fired off a note to the powers that be at Gatorade asking them what would happen, and I’m sure they’ll get back to me just as soon as they’re done discussing what a fucking moron I am.

Also of note this week – I only posted three things, one of which was a video. My bad. I usually try to post four or five times during any given week but wasn’t able to because of… (digs through excuse jar)… Shingles. Yeah, that’s it. To make up for it, I’m going to go through my voluminous vault of strange videos and post one a day for the whole week. So sit back, revel in the weirdness, and enjoy a big, fat line of Gatorade.

Today’s video is the best DUI stop ever, starring Mr. Turner who understands that he “wasn’t motherfuckin’ drivin’!”