You know what I had growing up? A basement. A simple basement down a simple flight of stairs. It was wonderful. My dad had an office down there, filled with his extensive library of books that I devoured when I was a child. The first novel I ever read was Jaws. I was seven at the time, and it was quite an eye opener. I learned that I was never going to go swimming in New England, and also that sex scenes in novels were weird, hard to fathom, and something that I wanted to investigate in much greater depth. I read that book, and many, many more in our basement.

We also had a room that I’ve mentioned before, one where my parents suspended all of the rules. We were allowed to draw on the walls in that room, throw toys at each other, break things with hammers, whatever we wanted to do. If it stayed in that room, there were no consequences. If it didn’t, well, we were led to believe that our funerals would be short, not well attended, and a replacement would be arriving to move into our room shortly. As we got older, of course, we realized that there were some activities that were not covered by that room’s special sanctuary, specifically smoking dope and drinking beer. Still, we did that down there in that room in the basement. It just felt right. More so after a mattress made its way down there and I landed a girlfriend.

A large part of the basement was devoted to my father’s tools, which meant that they were horribly abused by his sons when he wasn’t present. I remember numerous times trying to construct some project or other and saying something to my brother such as, “I need to pound this nail in. Hand me that crescent wrench.” If there was one thing my father could be sure of after having spent all the time and effort to organize and hang up all of his tools: If he needed one it was always either missing or broken.

The basement was also where untold tales of athletic glory took place. Like the time a hastily organized indoor basketball game involving a tennis ball and a masking tape square on a wall resulted in my much older brother literally throwing me through the drywall and into the next room. Or the time I let my disbelieving mom know that, really, I could beat her handily at ping-pong whenever I felt like it. I then beat her 21-0 and she never played again. Or the air hockey table that we played until it was no more than a smoldering fan on wobbly legs. We used the old style controllers that exposed your knuckles to your opponent. Hit a shot just right, and it lifted off the table just enough to smash your opponent’s fingers into bone dust. We built a miniature Stanley Cup for the winner, and dynasties rose and fell in that basement. The only thing louder than the screams of pain were the triumphant shouts of victory. 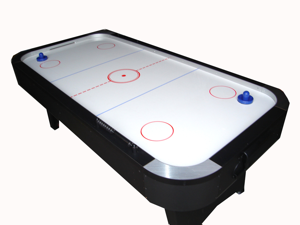 So when my mom called to inform me that she had finally moved and that the house I grew up in was now someone else’s, it was an odd sensation I experienced. I didn’t mourn my bedroom. That was small, drafty, and as a result of being at the very end of the heating duct, ice cold in the winter. I didn’t mourn my back yard, home to baseball games, frisbee marathons, and late night prison-breaks where the wardens were bested by the simple expedient of me hopping out of my bedroom window. It was the basement I mourned. Dark, forbidden, mysterious, and hidden from view. I don’t know what it says about me that the part of that house to which I am most attached is underground, but when I found out the house had changed hands, I hoped the new owners had children. And I hoped that they gave them one room down there to have as their own. And I hoped that they would find my stash of Playboys (hidden in a depression behind the water heater many, many years ago) before their parents did.

And that is what happens when a certain someone tells me to write just one post without using fucking curse words. Sorry, kids, dick jokes resume on schedule tomorrow. On to what you missed last week while you were frantically trying to locate your girlfriend’s panties in the dark while ominous steps were heard coming down the stairs:

As usual, don’t forget to get your weekly hypothetical question in to me so I can slice it, dice it, and chop it into a form where it will serve as a vehicle for me to make dick jokes and profane statements belittling Belgians. Some things never change. 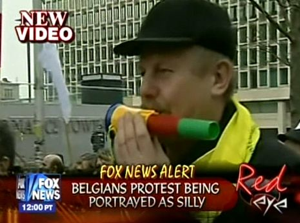