I saw a wonderful example of Christmas spirit today, and thought I’d share it with everyone. As I was driving home from work, I passed a hotel parking lot and in this parking lot was a woman holding a bunch of bags, trying to get into her car. On the other side of the car was a young girl, approximately 12 or 13 years old. I could tell, as I was driving by, that the woman was agitated about something. Finally, I guess she’d had enough: She slammed the bags down onto the wet pavement while shouting “GODDAMMIT ASHLEY!” at the top of her lungs. Then she got in the driver’s seat and put her head against the wheel and started sobbing. And I thought to myself, “That little girl is a fucking bitch, making her mother flip out in public like that!”

Now a lot of people would assume that the mother had just lost her cool, that she failed in some fundamental way to deal with her child correctly. That with love, understanding, and patience, mom could have defused the situation and turned it into a life lesson for young Ashley, a sign that her mother loves her, and accepts her for who she is while guiding her in her quest for adulthood. The people that believe this have no children and are fucking assholes.

Because, for as much as we love our kids, and as rewarding as parenthood can be, kids are the biggest bunch of ego-maniacal, rude, insensitive pricks on the face of the planet. These little fuckers will destroy your property, bodily assault your loved ones, call you names, literally spit in your face, and then fifteen seconds later ask you for a cookie. And we let them get away with it. Why? Because they’re cute. Think about it. There should be a lot more ugly kids around, but there aren’t. You know why? Because they have no natural defenses, so when they play tic-tac-toe on the new HDTV screen with a steak knife, they get their ugly little asses thrown in a fucking well.

So I immediately took poor mom’s side when I saw her lose her shit. I’m sure Ashley was acting like a total cuntbag, and I can only hope that she amends her ways before she winds up like this girl, about whom I can honestly say that I hope she grows up and suffers a case of chlamydia so severe that her tits fall off.

Wow, huh? Ok, on to the hypothetical question of the week which comes to us from Asskatoon (cute), which I will reprint verbatim: “If you were sentenced to death unless you could successfully ass fuck a gorilla, a hippo, a tiger, a lion or a rhino which one would you choose? Would you survive?” Let the record reflect that humanity has officially peaked. It is all downhill from here. And I, for one, welcome the inevitable slide into self-destruction if it means the end of fucking goofball questions like these (although really, I’m secretly thrilled when I get a question this messed up because it makes me look like a normal human being by comparison).

To answer your last question first, Asskatoon, I would most certainly not survive. I would die a horrible, horrible death before I got anywhere close to fulfilling my mission. I’d probably still be involved in foreplay when I had my head forcibly removed from my body. You see, for as horny as guys are, there is a certain amount of performance anxiety attached to the act of sexual intercourse. This anxiety, I’m guessing, would not be reduced by sneaking up on a lethal monster five times my size and trying to play a sudden game of African Ass Safari on it. There would be an extremely brief struggle, and then Diane Fossey would write an entry in her journal about it.

December 12th, 2011 – I found Mkimbe and Pogo playing in the bush with what appears to be a length of sausage, although where they would have obtained this, I haven’t the slightest idea. Mkimbe proceeded to slap Pogo across the face with it, which brought forth noises I can only describe as laughter. These apes are such noble, majestic animals! 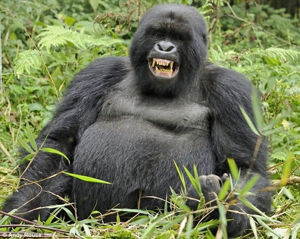 But assuming the death sentence I was faced with was impossibly, somehow more degrading than the bestial alternative you set forth, let’s break it down: The lion and tiger are immediately ruled out. Anyone who has ever owned a cat and tried to put it in a bath can tell you, cats are flexible as all hell with extremely sharp claws. I fully expect that any attempt to mate with either of these big cats would result in instant castration followed by a more leisurely process of eating my ribs and using my tears as dipping sauce. Fuck. That.

I’m tempted to go with the gorilla for a couple of reasons. First of all, they’re at least human-like in appearance, and I suppose if I kept my eyes unfocused I could pretend I was nailing someone equally hirsute, such as Snooki, and stand a remote chance at finishing (although I’d probably be better off in that regard just admitting to myself that it was a gorilla) And most importantly, the gorilla would undoubtedly crush my skull like a grape, making the end mercifully quick. But ultimately, I have to scratch the gorilla off my list simply because of the possibility that the gorilla would like it and decide to return the favor.

That leaves the rhino and the hippo. Many people don’t know this, but hippos are not the peace-loving, plant-munching, river-dwelling gentle giants portrayed in cartoons. Plus (and I know this will be a shock to many) they rarely wear pink tutus. In fact, more people die in Africa from hippo attacks each year than all other animal attacks combined. Plus, those fuckers can run at an amazing 18 miles per hour, so even if I could somehow perform a “two-pump-chump” on one and tried to high-tail it outta there, it’d still be using my carcass as a trampoline in no time. (Another little known fact, you can replace the word “hippo” in this paragraph with “Rosie O’Donnell” and it is still 100% accurate.) 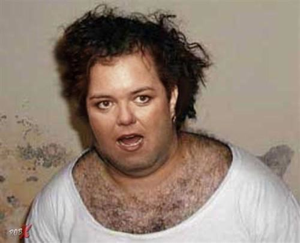 So I guess I’d go with the rhino. I’d hope that, due to its size, and the fact that rhinos are quite heavy sleepers that I might be able to get the job done without waking it up. But almost certainly not. And after being hunted to the brink of extinction so people could grind up their horns to use as an aphrodisiac, I’m sure the rhino wouldn’t be in a very forgiving mood. Tell my kids that I love them, and tell my wife that rhino meant nothing to me.