If you pay attention to my Twitter feed (over there, to the right), you’ll know that I often use it to troll celebrities. Like the infamous Foreigner/Roast Beef imbroglio. Or the time I asked Journey if they shot the man responsible for their mind-bendingly retarded video, Separate Ways. But you’d have to be paying extra close attention to have caught the tweet in which I discussed my plan to ask Joyce DeWitt (Janet from Three’s Company) to sign a photo with the words, “Greg, Thanks for the herpes! Love, Joyce DeWitt!”. (Huh, I guess I mentioned it in the infamous Lindsay Lohan post, too.) Well, today I got a little something in the mail. 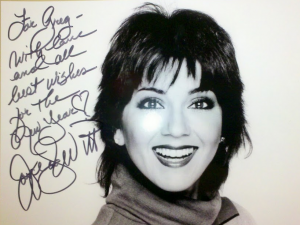 Click to embiggen, but it reads "For Greg - With love and all best wishes for the New Year (heart symbol) Joyce DeWitt" 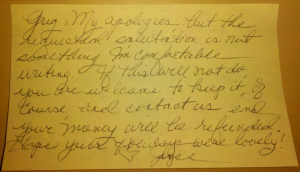 Click to embiggen, but here's what it says: "Greg, My apologies, but the requested salutation is not something I'm comfortable writing. If this will not do, you are welcome to keep it, of course, and contact us and your money will be refunded. Hope your holidays were lovely! (heart symbol) Joyce"

Goddammit, Joyce! You are a celebrity! You are supposed to react to this by getting totally fucking outraged and sending me something back along the lines of, “Greg – Go fuck yourself! Joyce”. Curse you and your polite manners! I haven’t been this disappointed since Bozo the Clown responded to a young me with a note thanking me for watching, but he was unable to shout that particular word out loud during his next show because it was a “Bozo no-no!”

You know who knew how to go off on a fan? Orson Welles. One time I shot him off a note asking what he thought made Citizen Kane such a special film, and why he felt it necessary to eat the cast. His answer was to show up at my house late one night, absolutely hammered on Paul Masson, piss on my driveway, and hurl a large section of cheesecake at my front door. The police found him two houses down, trying to take a dump in my neighbor’s azaleas. That was a man who knew how to show contempt for his fans.

Anyway, many thanks to Joyce DeWitt for her politeness (she’d let me keep the photo AND refund my money? Damn!), and for not pocketing the money and ignoring me, which must have been tempting.

On to this week’s hypothetical question, which comes to us via email from someone who wishes to remain Anonymous, but I will call Butt-Chunker, because I hate it when people don’t put forth the effort to at least come up with a fake name. Butt-Chunker writes:

If you could turn back time and go back to being five again, would you? The catch: You would be exactly the same person, just in the body of a five year old.

We all owe Butt-Chunker a hearty thank you, if not thousands of dollars in cash for saving us from the default question I posed in yesterday’s post. Unfortunately, Butt-Chunker chose to go the anonymous route and gets exactly diddly-fucking-squat. Anyway, great question, BC.

At first glance, you’d probably go back to being five in a heartbeat. Who wouldn’t? It’s fucking awesome being young. You get to eat a lot of shit food without guilt, you can whip your privates out without fear of arrest, and you’ve got absolutely zero responsibilities. Fucking. Awesome. But if you were five again and you were still the same person, that would be pretty fucked up, wouldn’t it? I spent the last five minutes mentally picturing the kind of problems that could cause. 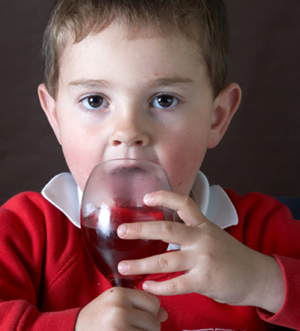 The kind of problems that could cause.

Greg’s Mom: I’m worried about Greg. He’s supposed to be in bed, but I caught him watching an R rated movie. And when I told him it was inappropriate, he yelled at me! He said, “I can’t fuck broads any more, the least you can do is let me watch other people fucking do it!” He was very angry! Where do you think he learned that from?

Greg’s Dad: Beats the hell out of me, but if I catch him in my liquor cabinet again, I’m going to be really pissed.

Seriously, you wouldn’t be able to do anything fun any more. No drinking, no smoking, no getting laid, no watching trashy movies, no staying up way too late, no writing juvenile and offensive blog posts that detail your weird herpes-related correspondence with Joyce DeWitt… Not only would you not be able to do any of that shit, you’d be a good decade away from even having a hope of getting away with it occasionally!

Plus, school would be a fucking drag. Yeah, you’d get straight A’s. Without trying. And even though you’d be bored out of your goddamn skull, they’d probably hail you as a great child-prodigy, skip you ahead a bunch of grades, send you to special schools, etc. Great, so now you can’t get laid and you get to spend all of your time with nerdlings.

One good thing I could picture is making a deal with my parents. “Mom, Dad, if I get straight A’s all year long, will you take me to a Led Zeppelin concert?” I could finally get to see my favorite band live, and I’d probably get a contact high just from walking through the parking lot. 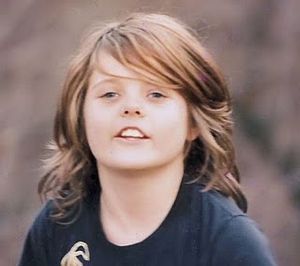 But it would be a pretty frustrating way to go through life. Until you became sixteen again and started getting your freedom back. Holy shit, can you imagine going through high school, only knowing all of the shit you know now? Bad-fucking-ass. Every single girl who ever told me, years later, “You didn’t know this, but I had a total crush on you!”, they’d be in the back of my banana yellow Chevy Impala station wagon (really) so fast they’d never know what hit them.

Plus, I’d have some serious fucking coin to play with. I’d know the winner of every World Series and Super Bowl, and you could be sure as shit I’d be putting money down on that. “Yeah, that’s right! All of it on Buster Douglas to knock out that pussy Mike Tyson!”

And then I’d use that money to get booze the easy way for a teen: Pay handsomely for it. Dickwads used to scoff at me in the liquor store parking lot when I’d ask them to buy me a sixer. Now they’d be fawning all over me. “$500 to buy you a keg, a carton of smokes, and a couple of copies of Hustler? You got it, kid!”

I’d be awash in beer, drugs, and since I’d be able to correctly anticipate fashion, I’d be drowning in girls too. “Nice mullet, Greg. You’re always on the cutting edge of what’s cool!” “That’s great, toots. Now, what’s say we hop in the back of my yellow station wagon!”

I think I’d have so much fun being a teen again that it’d be worth a decade plus of frustration and boredom. Fucking sign me up! (Don’t tell the wife.) 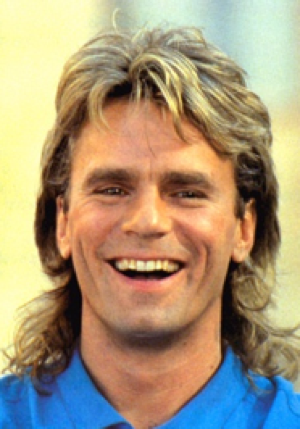 Yes, I'd rock the MacGyver (again) if it got me some more trim.