I took my kids to the LEGO Store this afternoon, and let me tell you something: No matter what age you are, if you can’t get your kid on in the LEGO Store, then you are a reprehensible human being and I don’t want to know you. You know who would have loved the LEGO Store? Hitler. No shit, he was into architecture and design in a big way, so if you don’t like the LEGO Store, you are worse than Hitler.

As a dad, this is a real problem for me. When we get a new LEGO kit at home, my kids pester me endlessly to put it together for them, which I agree to do only if they will help. And so they help, which at first means that they ask a series of rapid-fire insane questions at me.

Son: “Why are LEGO’s things? And why can’t we use them for food?”

Me: “What the…? Have your older cousins been blowing funny smoke in your face?”

I honestly don’t know how my kids get such good grades. They ask questions that, if posed them to a crack-head, the crack-head would look at you all funny and say, “Man, what the fuck is wrong with you?” After the insane question phase comes the piece pilfering phase. This is where they reach out and grab a key piece and then hide or possibly eat it. This results in me scratching my head while looking at the assembly instructions for upwards of 45 minutes, trying to figure out what I did wrong and where that part is. 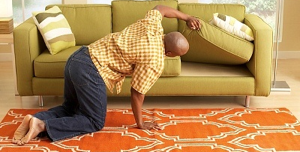 Yeah, I know I never brought the LEGOs over here. But that piece had to go somewhere! It's not like someone fed it to the dog or anything!

Finally, after tiring of watching daddy swear to himself, the kids run off and I can finish the kit in peace. Then I bring the finished product to show them, and they laugh and instantly smash it on the floor, mixing the pieces with the remnants of 100 other LEGO projects. “Make it again!” they’ll shout. “Make it again!” At this point, for some odd reason, telling your kids to go fuck themselves is still frowned upon, so I have to give them a G rated version: “Santa is not real, you were adopted, the boogey-man is real and lives under your bed, now go to your room.”

So fuck buying kits, I just need assorted LEGO’s, which is where the LEGO Store comes in. They’ve got an entire wall of LEGO’s, in all colors and sizes. It’s fucking awesome, and I had to use all of my adult power to keep from dumping all of the bins out on the floor and just start building shit with my kids. “Sir, you cannot dump out the bins in the LEGO Store. And if you don’t stop spelling ‘Go Fuck Yourself’ in four foot high letters, I’m going to have to call security!”

And I was thinking about this and realized that they should do away with the play area in the mall and just replace it with a massive pile of LEGO’s. How awesome would that be? You could leave your kids there for hours while you shopped in peace, got a bite to eat, moved to a different state, etc. The mall, of course, would never do this. They’d be concerned over liability issues when a kid inevitably jams a LEGO 10×1 rail into his nose and self-lobotmizes himself. But you know what kind of kid does that? The stupid, moronic kind that is just trying to clean up the gene pool by offing himself before he procreates, so let’s not get too worked up over it.

But, yeah, the LEGO Store is totally fucking bitchin’, and I wish I had won the lottery this weekend so I could build a LEGO house, like this guy did. 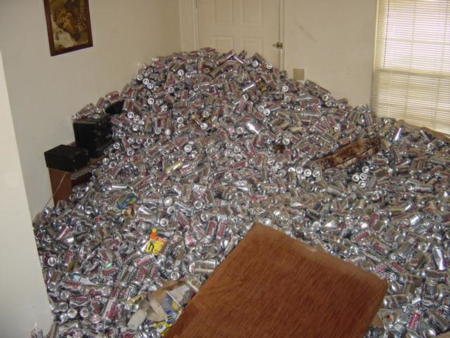 A LEGO house is cool and all, but I'd be more impressed by a beer can house. The best I've been able to do is just fill a house up with beer cans.

On to the week you missed when you were looking for a black 7×2 LEGO. Wait, do they even make those? Maybe they meant an 8×2 piece, but there are only three in this kit and I’ve used them already. Fuck! Did the kids eat it? Or the dog? DAMMIT WHERE THE FUCK IS THE BLACK 7×2 FUCKING LEGO? I CAN’T MAKE DARTH VADER’S COD-PIECE WITHOUT IT, PEOPLE!

Ok, whether they like it or not, here is a word from Wheaties. It’s Involuntary Advertising. 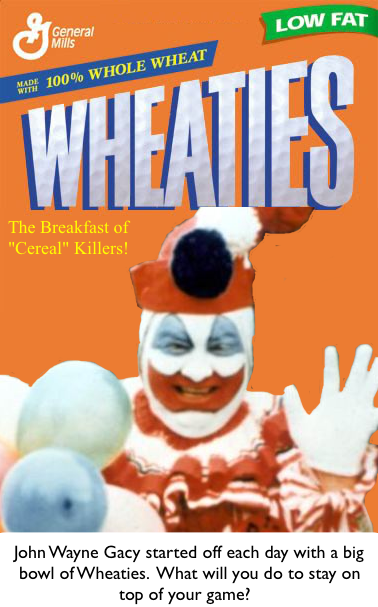 On to the results from last week’s poll, which asked which sport would be the hardest to play under the influence of LSD. The winner, as we can see below is hockey, picking up a solid 53% of the vote. Something about mounting yourself on extremely sharp blades, stepping onto a giant sheet of ice, and having 250 pound dudes check you into the boards and occasionally fire a hunk of hard rubber at your head doesn’t exactly make for the best tripping experience, does it?

The battle for second place is more interesting, in my opinion. I find it hard to believe dropping acid would make it easier to hit a 102 mph fastball, but hell, a pitcher once threw a no-hitter on acid, so I’ve got to agree with the results that claim football would be more difficult while tripping balls. I, personally, would melt into a puddle of fear just looking at the steroid-feuled behemoths lining up across from me. Kind of hard to “execute” when you’re being scraped off of the other team’s cleats.

Ok, another week is upon us. Go out there and make me proud. Oh, and hey… Let’s be careful out there. 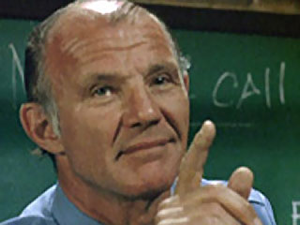 Anyone else miss Hill Street Blues?