It’s been a while since I’ve toyed with Al Gore. I used to enjoy lurking in the bushes behind his house and just when he was getting ready to go to sleep… BAM! I’d light a totally unnecessary campfire in his back yard and run like hell. “God dammit!” he’d shout, running into the back yard. “Do you know how much carbon this releases into the atmosphere?” And as he was putting out the campfire, I’d come around the side of his house wearing a hat with the word “PRESS” on the brim and snap his picture. “Wow, Mr. Gore! For someone who loves the environment, you sure do light a lot of unnecessary fires!” One time he got so worked up that Tipper had to come out of the house with a glass of lemonade and a moist towel. “Al, honey, sit down! You know what the doctor said!” I’d laugh and stroll off, saying my goodbyes over my shoulder. “See you, Mr. Gore! I have to drive my Hummer down to the paper to deliver this photo. This is front page news!”

Those kind of hijinks were fun for a year or so, but then I kind of lost enthusiasm. As the bad news started to leak out that the planet wasn’t nearly as fucked as ol’ Al said it was, he sunk into a weird despair. I came over one time and found him on the front porch, playing with a Captain Planet action figure that he’d pasted his own face onto. It was sad, really.

But you can expect to hear a lot more from Al Gore soon because (and hold on to your hats for this one, folks) HE HAS A GIRLFRIEND! Yes! A serious girlfriend, and not just a girl who’s being nice to him because she wants to see his notes from biology class. A real live human girlfriend! I know. I’m shocked too. Sure, he was married to Tipper for a long time, but we all know what the deal was with that…

Face it, she was loaded. They didn’t call her “Tipper” for nothing, you know. And when she woke up sober one morning to find Al whacking it to an issue of Field & Stream, she was out of there. So assuming this new girlfriend is not of the blow-up variety, this is big news. It’s not often that Al gets to inspect wetlands first-hand, if you know what I’m saying. (And if you do, please send me an email because I’m not sure I know what I’m saying.)

His girlfriend’s name is Liz Keadle and if you ignore the extreme Botox dome she’s rocking, she looks pretty good for a gal her age! 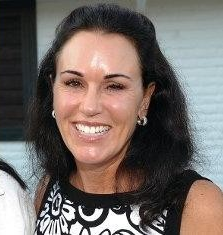 Al Gore’s girlfriend. You don’t want to know what she does for the environment. Hint: It involves gargling and Al Gore’s balls.

Nicely done, Al. We’re happy for you. Now stay inside the house and swap carbon offset credits with her, or whatever the fuck it is you wacky kids do, and leave the rest of us alone!

But you know he’s not going to be able to do that. Now that he’s got his confidence back, he’s going to redouble his efforts and he will not rest until we spend $192 quadrillion to convert our planet to yogurt-based power because if we don’t we are fucked flatter than hammered shit, people! And if you don’t agree with him, then YOU ARE AGAINST SCIENCE, MISTER!

So he’s going to need to be brought down a peg or two, if you ask me. Here are some ideas. I humbly solicit your additions to this list. 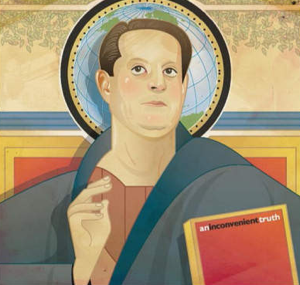 For God so loveth the world that he gave his other Son, Green Jesus, that whosoever believeth in him may purchase carbon offset credits… or something. “Sorry,” said God. “But he’s been driving me nuts up here. I needed a break.”