I got my hair cut today, something that always leaves me with mixed feelings. I was cursed with fine and very straight hair, which means that the only way it looks good is to keep it short. I’m ok with this now, but when I was growing up I desperately wanted to have hair like Robert Plant or Jimmy Page because look how much pussy those guys got! They were… So. Fucking. Cool. But even when I got to the age when my parents let me grow my hair (in other words, the age when I stopped listening to them), my hair would not fucking cooperate and instead of looking like Robert Plant, I wound up looking like the offspring of Axl Rose and Gollum after having gotten out of a pool. It was not a good look for me.

Not that it stopped me from trying. “Hey, it may not look good now, but if I grow it out another six inches…” seemed to be my mindset, if you can say that a mind that clouded with pot had a mindset at all. Eventually, my hair wound up half-way down my back, a look that could only very generously characterized as “burnout chic”. (My father wouldn’t have agreed with that assessment. He told me that I looked like I had been marooned on a desert island for four years.) Combine the hair with my wardrobe of torn, faded jeans and concert t-shirts, and you wind up with a look that says, “Hey! If you’re looking for drugs, I have some!” I’m not kidding. I can’t count the number of times I’d be walking down the sidewalk when someone in a car would stop, lean out of the window and ask me if I had drugs. I met a lot of friends that way.

Of course, after college I turned into a responsible and law abiding citizen, and so I cut my hair. Hahaha, just kidding. I partied my ass off when I was in my twenties. But I did cut my hair because I had to get a job, and when you no longer live in a college town, looking like a drug user tended to get you searched like a drug user. Discretion being the better part of valor, I bid farewell to my long, tangled locks of hair.

Over the years my hair varied somewhat in length, but always stayed North of the collar. When I turned 35, however, I had to make a change: I was diagnosed with cancer. I’ve made reference to this before, but for the record, I had non-Hodgkin’s lymphoma, a cancer of the immune system. This is scary shit, but not brain-tumor scary or anything. It is a very treatable disease, and I got through it in about six months. But I had to go on chemo, and that meant that my hairstyle was going to change, although a more accurate way of putting it would be to say that my hairstyle was going to go away entirely. 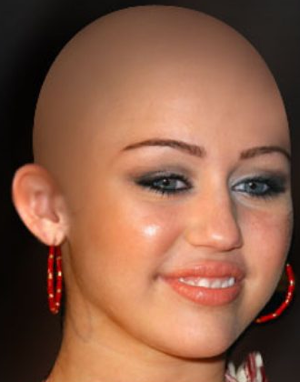 Of course, I can be an ornery son-of-a-bitch when I want to be, so my attitude was that I would not let cancer take anything from me. If it was going to take my hair, well then fuck you, I’m taking it first. And so I shaved my head. For someone who still secretly wanted to be Robert Plant or Jimmy Page, this was deflating. Robert Plant never cut his hair. Jimmy Page cut it kind of short once, and he wound up looking like a frog on cocaine, so he grew it back. I was bald as a cue ball, and the only cool person I looked like was Hunter S. Thompson, which was awesome in a way, especially since I took way more drugs than him that summer, although none of them of the fun variety.

But it was weird to look in the mirror and see myself without hair. I looked like… my father! My father had thick, luxurious hair, the kind that a person can keep well into old age, but in the ever-so-square fifties, a mop of unruly hair was something to be tamed. One day, at the age of 31, he got a buzz-cut on the way home and never grew his hair out again. And that’s the person I looked like.

There was hope, however. As I sat in the chemo room, getting pumped full of a whole range of toxic chemicals, I read up on some of the literature. Cancer literature, for those of you fortunate enough to have never read it, is an odd mix of inspiration and pants-shitting fear. A typical paragraph might read like this:

Although cancer of any type is a serious disease, years of research has yielded wonderful new treatments that offer patients hope and long, healthy lives. Millions of people are successfully treated for cancer each year. Chemotherapy, however, does have some drawbacks. You may find yourself experiencing dry mouth, itchy skin, upset stomach, nausea that would make a whale explode, spontaneous decapitation, allergic reactions to the color blue, smelly eyeballs, a swollen forehead, teeth forming on your nipples, nose tremors…

Not really the kind of thing they should be giving cancer patients, in my opinion. But one thing caught my eye: I read, with considerable interest, that “your hair will most likely grow back after cessation of chemotherapy. It may, however, come back a different color or even curly when once it had been straight.” Holy shit! My dreams of turning into Robert Plant were not dead!

As I went through chemo, I often wondered what the odds were that my hair would be any different. I also wondered what a teenage me would have made of this situation. “Teenage Greg, if I told you that you could have long, curly hair like Jimmy Page, but only if you got cancer first would you…” and teenage Greg would be running down the hall to nuke some food with his balls sitting on top of the microwave so he could get a head start on looking like Jimmy Page. 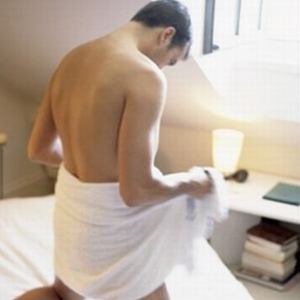 C’mon tumors, where are you? Dammit, how unlucky can one guy be? I’ll never have hair like Jimmy Page!

After I had been cleared to stop chemo and start getting on with my life, my hair came back, slowly at first. And it came back brown, and straight, and while it was fun being a hairy dude again, I won’t lie to you, it was yet another in the long line of hair-based disappointments for me. And so I shaved it all off again. There are advantages to shaving your head: You don’t have to do anything to your hair in the morning, the wind won’t mess it up, you can be in and out of the shower in a few short minutes… It’s a great hairstyle for lazy people, basically.

Then, out of the blue a few years back, I decided to grow it back for no reason that I can think of now. I just did it. But now, dreams of rock stardom long since dashed, I keep it short and make regular trips to get it cut. And every few weeks when I go in to have it cut, I sit there in the chair, looking at my father’s reflection in the mirror, and I think to myself, “That looks pretty good. … But I don’t look like I’m in Led Zeppelin.”

« Previous post
Ok, It’s Official: Fuck You Star Wars
Next post »
I Want To Live On A Farm In Vermont