Last Tuesday, at 6:15 in the morning, my six year old woke me up with this statement: “Hi Dad! Oh, by the way, I forgot to tell you… I accidentally dropped an eraser in my ear yesterday. And… It’s still there.” I hesitate to say that there is a good time of day to hear this kind of thing, but I can tell you with some confidence that 6:15 AM is not a good time to hear it, even if your son does take the trouble to tell you the news in a faux-casual tone. A quick trip to the bathroom revealed that, yes, there was an eraser in his ear, and yes, I would need to take him to Urgent Care to get it removed.

That, in a nutshell, is what having kids is like. One minute you’re calm and peaceful, the next minute you are on your way to the hospital. I remember putting my father through this routine a couple of times as a child. One winter night, my younger brother and I headed out into the back yard, which had recently frozen over into a thick, flat sheet of ice, the result of a sudden thaw followed by a sudden deep freeze. “Be careful out there fellas,” said my dad. “Don’t crack your heads open on the ice!” 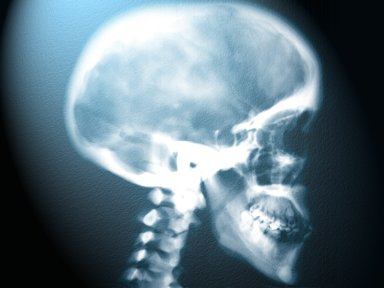 With all the recent, wonderful advances in medical technology, nothing!

On the very first pass, I put a tremendous lick on my younger brother, whose body jerked violently from the impact and began falling to the ice below. To stop his fall, he wrapped his arms around my body and pulled me down with him. Arms pinned, I slammed head first into the ice. “Ow, shit!” I exclaimed. A bright yellow spark in my brain had erupted when my forehead slammed into the ice. “I think I’m hurt. Can you see if I’m bleeding?”

“Uhhh, there’s like, a little scratch there or something.”

We went inside, and of course the little scratch was neither little nor a scratch. Although there was very little blood, I could pull back the skin slightly and see the dull white of my skull clearly in the bathroom mirror. A couple of minutes later, we casually walked into the TV room, sat down with my parents, and had the following exchange (which in writing is way less idiotic than how it sounded live):

Brother: Greg, what do you want to watch on TV tonight at nine when… Hey! Greg! What’s that on your forehead?

Me: My forehead you say? Why, whatever do you mean?

Brother: Yes, it looks like you have a very, very small, tiny scratch or something on your forehead!

Me: Well, for the life of me I can’t imagine why I would have a small, almost insignificant scratch on my forehead! I shall go investigate further in the bathroom with the aid of a mirror!

And of course my father followed us into the bathroom where I proclaimed with no small amount of mock alarm, “Oh no! I am able to see my skull!”

“Ahh, Jesus, I told you not to crack your head open on the ice!” Said my father. He gathered up the car keys and took me to the hospital, where I received nine stitches and a lecture to not screw around on the ice. 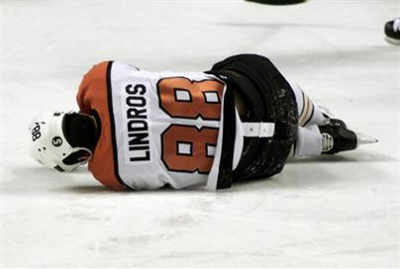 Sadly, Eric Lindros’ father never had this discussion with him. (Hockey humor: Because fourteen people can’t be wrong!)

It could have been worse. My brother’s infamous surprise trip to the hospital took place at 3:00 in the afternoon on a Wednesday in August. Him and a friend decided to experiment with alcohol, which many young teens do. Unfortunately, the first experiment they decided to try was the Jack Daniel’s Capacity Test, which resulted in explosive regurgitation, an ambulance ride, a pumped stomach, a catheterized bladder, and a rather large hospital bill.

Other surprise trips to the hospital that I was indirectly involved in included a kid who split his eyebrow so badly that it dropped over his eye, causing him to think he was blind; a girlfriend who fell into a quarry and shattered her kneecap; and a best friend who, while riding a pogo stick, struck the edge of his driveway, rocketed sideways into a grove of trees, and landed squarely on top of a hornet’s nest. His head was the size of a watermelon by the time the ambulance pulled away from the curb. 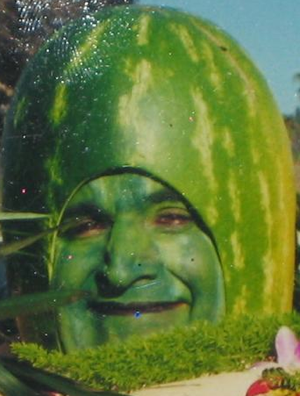 My friend never recovered. He made a living for a while touring state fairs until one day someone poked a hole in his head and poured a gallon of vodka on his brain. RIP, Charlie-Melon!

And that’s where the Fatherhood Trick comes in. It’s simple: Keep a large wad of cash next to your car keys, and get ready to use them. In fact, make sure your wife has a large wad of cash ready by her car keys as well because sometimes your kids won’t be content with just dragging you along to the hospital. Sometimes they’ll try to get you dragged off to jail as a pederast:

Friday night, my wife and I took our kids to see Finding Nemo in 3D. My three year old announced that he had to go potty, and so I took him to the bathroom where we entered a stall. After he had gone and started in on the tremendously difficult task of pulling up his pants, I decided that I may as well go while I was there. So I stepped between him and the toilet and went about my business.

All of a sudden, I noticed my son peering around my leg to see what I was doing. Then he exclaimed, in that shrill and peculiar 160 decibel voice that only toddlers possess, “I REALLY LIKE YOUR WEINER!” If you had shone a flashlight at the door, I’m fairly certain that I would have beat the photons of light out of the restroom.

Fucking kids. I would have traded two erasers in the ear for that one.