I’ve seen a lot of stupid things in my day (and I’ve been to Indiana, so that’s saying a lot). But this takes the cake:

Right about now, you’re probably getting ready to shoot yourself in the head on the grounds that you just lost 80 IQ points from watching that, and life is better off ending than being spent in a home for people who drool and rub shit in their hair. No one would fault you, that’s for sure, but before you check out, let me tell you the part of this video that haunts me.

Ok, sure, there’s a lot to question in this video, even if you accept a universe in which someone has to sneak Richard Dean Anderson out of a country. (I mean, if I was running a country, I wouldn’t try to keep him in the country, that’s for goddamn sure. I’d be all about letting him leave, even if it took a very large catapult to make that happen.) The first, and most obvious question is “Why the fuck am I watching MacGyver?” Teams of scientists have tackled this very question, and the only even remotely satisfying answer they’ve come up with is, “Because it beats watching Family Matters. Fucking Urkel.”

No, the question that haunts me is whose job is it to make a jet-ski coffin? I mean, do they really expect us to believe that there’s a person sitting at a desk whose job description requires him to construct pleasure watercraft and conceal them as caskets? Where are these jobs in the classifieds? What do they pay? And would this be a full time position? Is this skill needed on a regular basis? 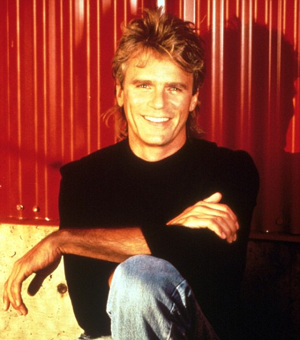 It is when you work for this guy! He doesn’t take his meds!

Here’s how that assignment would go if I was the unlucky bastard who got that job:

Boss: Quick! We need you to build a working jet-ski that folds into what looks like an ordinary coffin!

Boss: Yeah, and it’s gotta be made out of wood!

Me: Are you fucking out of your mind?

Boss: No, we really need it because otherwise MacGyver is going to be stuck in Bumblefuckistan.

Me: Oh… Yeah, look, I’m on my break right now. Here, just give him this paperclip and a picture of me flipping him the bird. I’m sure he’ll figure something out.

Another thing that bothers me about this video is that Richard Dean Anderson clearly cannot be put at risk by riding a jet ski. If the stunt double wasn’t obvious enough, the cut shot to MacGyver standing still (bone dry) while he’s ostensibly fleeing for his life seals the deal. Look, I’ve watched people with a blood-alcohol level approaching the national debt pilot a jet ski, so how hard can it be? Apparently too hard for Richard Dean Anderson, although to be fair that decision may have been made out of concern that his mullet would get wet. Hard to fault ABC for that because for a great many years during the late 80’s, their programming was entirely mullet-based.

But it does kind of make you think less of MacGyver, doesn’t it? Here’s this guy who can defuse an active nuclear weapon with a fucking sperm sample, and he can’t jet ski? That’s fucking lame. The next thing you know, you’ll discover that he can’t even fix his own car.