I rented a safe deposit bank at the bank today, and if there’s a legal way to feel like more of a total badass, I haven’t heard about it. I felt like I was dropping off money to pay for a contract hit, and I think we can all agree that being involved in a contract hit in any fashion is fucking awesome. (Ok, fine, it’s not that fun to be on the receiving end of one, even if it would be nice to know that you meant so much to someone that they tried to have you offed.)

For those of you who haven’t had a need to store your passport in a safe environment, here’s how the process goes: First of all, you need to walk into the bank. This sounds simple, but there are really only two ways of doing this that allow you to feel like a badass. The first is the Quiet Storm method, in which you look and act like any other bank patron, but deep inside you know that you are up to no fucking good. This is the method that I used. The other method is the Ultra-Badass method in which you waltz into a bank with a large bag labeled “Pharmaceutical Cocaine”, white powder on your upper lip, and loudly demand access to your safe deposit box “before someone loses a fuckin’ eye”. (This method is a little more difficult to pull off.)

Once you’ve asked for access, you will be escorted to a large file cabinet with a thick iron bar running down the length of it and a large padlock on the top. This is where your access card is stored, which they will pull and use to compare against your photo and signature. (I’m not sure what happens if you’re Not On The List, but I like to imagine that it involves truncheons, thumbscrews, and forced, prolonged viewing of MTV. I will send someone I really don’t like in there and let you know what happens.) 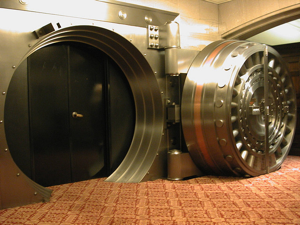 This, incidentally, is not my banks’ safe deposit vault. When I put down my large bag of tools, blueprints, and blasting caps to pull out my camera, they got very upset and told me I couldn’t take any pictures. Babies.

After you’ve gained access, you pass through the vault door, the bank manager opens a gate, and you’re in the safe deposit box vault. This is totally kick ass. There’s probably a lot of boring stuff in there, like jewelry, birth certificates and whatnot, but there’s almost certainly some really cool shit too, like stacks of cash, drugs, murder weapons, and blackmail evidence. Holy shit, safe deposit boxes are made for blackmail evidence. I bet thirty percent of all safe deposit boxes contain photos of people fisting horses or other weird shit like that. (Banks located within 100 miles of Gary Busey probably have a rate as high as fifty percent.)

But given how many fucking goofballs there are in the world, I bet there are a lot of safe deposit boxes with absolutely baffling shit in them, and every single one of these will be left to some poor bastard in a crazy uncle’s will. I’m sure that will happen to me. “Greg,” some lawyer will tell me one day, “Your Uncle Fenster made provisions for you in his will, namely the contents of safe deposit box number 4723.”

And I’ll get all excited and rush down to get the keys and the paperwork to allow me to retrieve the box, haul ass over to the bank, go through all of the security steps, including the awesome dual-key thermonuclear-launch-style box opening procedure, and hold my breath while I open the box and then… Well, then I discover that Uncle Fenster left me a can of Play-Dough and six pictures of Orville Redenbacher. Uncle Fenster, what a fucker. 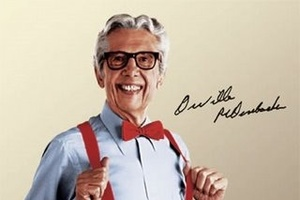 I bet even Orville Redenbacher’s family doesn’t have six pictures of him.

But even that would be pretty fucking cool. I’d almost certainly take that shit to the private viewing room to see if I could figure out the hidden meaning. (Yeah, the bank employees aren’t supposed to see what you put into, or take out of a safe deposit box. When the bank manager pulled out my box and handed it to me, I just went ahead and started putting shit into it (a photo of Barack Obama being born on the Great Wall of China). The bank manager damn near had a heart attack.) “Hmmm, what does this mean? Play-Dough… Orville Redenbacher… Uncle Fenster, what are you trying to tell me?” The fact that Uncle Fenster was trying to convey nothing more complicated than “I stopped taking my meds a long time ago” would never cross my mind. I’d do research, follow leads, and when I passed, I’d bequeath the family mystery to my kids and drive them batshit loony for a while. Cool.

There wasn’t a single thing about that experience that I didn’t like. I got back to the office and a coworker asked me where I had gone for lunch. “Oh, I just grabbed something to bring back to my desk. I had to take care of… some affairs,” I said, trying to sound as mysterious as possible, but probably coming off more like I’d just jerked it at a sperm bank. Oh well, fuck him. Safe deposit boxes fucking rule. I’m seriously considering getting a larger box and storing my fucking groceries in there. 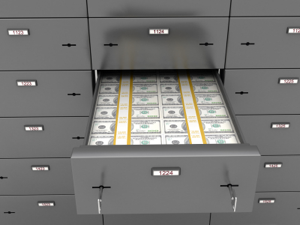 My safe deposit box wasn’t as orderly, mainly because you can’t put bands around forty-three cents in change.

You know what it reminded me of? The first time I visited the Titan Missile Museum. This is a “museum” which is less a museum than it is an actual thermonuclear-missile silo with all of the fucking equipment in it. You don’t call something that cool a museum, you call it “balls to the wall awesome”. And after I’d fucked around with blast doors, the firing sequence, peered down the missile silo itself, etc. I went home and acted all non-chalant about it, but really I was super-fucking-excited to tell anyone who would listen where I’d been.

Friend: Hey, where were you today? We hung out and had a few beers by the pool.

Me: Oh, I had some errands to run, had to stop at the bank, get some groceries, poked-around-a-nuclear-missile-solo, dropped some books off at the library… You know, typical Saturday.

Me: Hmmm, let me see if I have any singles. I know I had some when I was down in the control room of a facility that could incinerate a quarter of a billion people earlier today…

Toll Booth Operator: Sir, do you have a dollar or not?

Dispatcher: 911, what is the address of your emergency?

Me: I WAS IN A NUCLEAR MISSILE SILO TODAY!!!

Anyway, safe deposit boxes: Fucking cool. I highly recommend them. Unless you’re a horse-fister, and then you’re probably not so crazy about them. (*cough* Busey! *cough*) 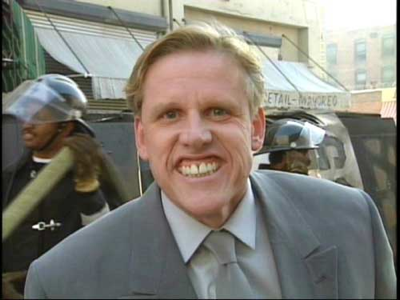 Gary Busey fists horses.
[Lawyer’s Note: Gary Busey does not fist horses.]
Well, he 69’s wallabies.
[Lawyer’s Note: No, he does not.]
Shut the fuck up, man, you’re ruining my gag.
[It’s my job to keep you from being sued.]
Yeah, but I don’t pay you to be a fucking buzz-kill.
[You don’t pay me at all, I’m a figment of your hash addled imagination.]
Fuck you, I’m taking you off the access list to my safe deposit box.