The other day I asked my six year old what he wanted to be when he grew up. Parents love asking their kids this question because kids are fucking morons and when you ask them this question, they’ll invariably say something stupid like “I want to be Darth Vader!” and then you don’t feel so bad about your job which may be demeaning and doesn’t pay you nearly enough, but at least your boss doesn’t choke you from across the room. “I want to be the guy that sells hot dogs at baseball games,” answered my son. See what I mean?

“People like hot dogs, and I would make them happy! I think it would be fun.”

I hate when my kids do something that makes me feel like an asshole. Here I am worrying about how much money I can pry from my employer so I can afford shit I don’t need, and my son’s number one job requirement is that it brings happiness to others. I’m going to have to toughen that kid up.

At least my youngest son is evening things out somewhat. When I ask him what he wants to be when he grows up, he answers, “I want to be a policeman!” That sounds nice, doesn’t it? He wants to help others.

“Because policemen get to shoot bad guys.” 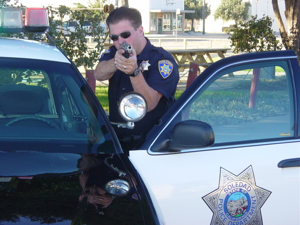 My daughter is currently twelve, and so she exists in a twilit world of negativity and sloth. Ask her what she wants to be when she grows up and you’re likely to get nothing more than a sideways look and a world-weary sigh. When she was four, however, she was oddly specific. “When I grow up, I want to have a salon called Ryer’s. We’ll do people’s nails and give them back rubs.” She would then practice for her future profession by taking appointments, doling out ineffectual fifteen second back rubs, and getting to what she does best: Shaking me down for cash.

“I’m not paying you fifteen bucks for that back rub. That’s highway robbery! How about I just deduct the fifteen dollars from what you owe me for the massive damage you do to everything in this house?”

I don’t know if she’ll go on to own a salon, but if she doesn’t she has other options. The mafia could use her to collect debts. 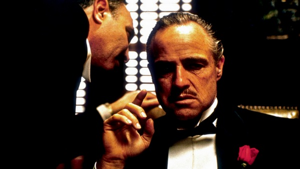 He welshed on a back rub? Have our girl make him an offer he can’t refuse.

When I was a kid, I always had one answer when asked what I wanted to be. “I want to be a doctor,” I’d say. I said this because our pediatrician was a kindly old man who ran his practice from the first floor of his farm house out in the country. As a patient, you could get your checkup then go feed the horses outside, and so being a doctor seemed like a cool job to have. Once I’d informed Dr. Kimball that I wanted to be a doctor, however, I noticed that saying this made people really, really excited, specifically my parents. And so I continued to tell everyone that I wanted to be a doctor out of habit and a desire to make my parents happy. This lasted until my sophomore year in high school.

A precondition of graduating my high school was writing a very long, and very researched paper on what profession you planned to pursue after high school. The paper itself had to be something ridiculous like fifty pages long, and students spent the better part of a year in completing it. (A fellow classmate took the notable shortcut of writing a ten page paper and repeating it five times, the idea being that the teacher couldn’t read every fifty page paper and wouldn’t notice his clever trick. The teacher did notice, and my classmate probably did not go on to become five astronauts.)

So I began to study what it took to become a doctor as well as what it was like to actually be a doctor, and not only was the profession noticeably short on horsey-rides and country-living, but consisted of honest-to-God hard work, long hours, and tremendous dedication. I was a sixteen year old who just wanted to listen to Led Zeppelin and bang his girlfriend. I didn’t want to work… wait a minute… 72 hour shifts in residency? Fuck that! 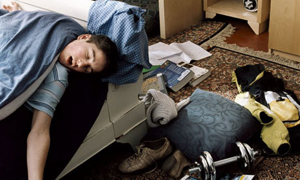 Do me a favor, wake me up when I get paid just for existing.

I remember at the end of the paper you were supposed to sum everything up and write about how excited you were to become a (insert profession here), but I couldn’t bring myself to do it. I explained how I had learned that the idea of being a doctor was much, much different than the reality and that I had no intention of subjecting myself to it.

I expected to lose points on my paper for choosing a profession that didn’t actually appeal to me, but instead I got a note to see my teacher after class.

“Greg,” he said, “I was happy to see that you really learned something while researching your paper. You probably got more out of this than anyone else. Ok, so you don’t want to be a doctor when you grow up. What do you want to be?”

“Well, don’t worry. You’ve got your whole life to figure it out.”

I should have said that I wanted to be a hot dog vendor.