Here’s How Much Of A Dork I Am

At work today, I got into a discussion with a coworker about a hypothetical situation: If scientists discovered a neutron star headed towards our solar system, guaranteeing Earth’s destruction in 100 years, could mankind survive by building a ship and sending a colony of people to a habitable planet orbiting a nearby star? Yeah, we could have been doing our jobs, but that’s boring. This question is interesting, much more so than performing open heart surgery.

Just kidding, I’m not a surgeon. I’m in IT, which you probably guessed after reading the first paragraph. IT stands for Information Technology, which in turn stands for “a bunch of dorks who understand computers”. We’ll gladly help out clueless customers and coworkers, but we need some time to get our nerd on, and so we spent the late afternoon talking about the question above.

Immediately, both of us agreed that the only way to get a ship to a nearby star system in a relatively short amount of time would be to use an Orion propulsion engine. Yeah, we both knew what that was without having to look it up. (*cough cough* Dorks! *cough cough*) In a nutshell, an Orion engine detonates a continual series of nuclear bombs behind itself, propelling the craft forward.

If this sounds totally insane, it’s because it is. Yes, we think that these engines would actually work (in outer space, anyway). But, seriously, we’re going to nuke ourselves across the galaxy? That’s fucking nuts. Take a look at the Wikipedia page for Project Orion under the heading of “Potential Problems”:

For that reason, alternative substances (e.g., plywood and fiberglass) were investigated for the surface layer of the pusher plate, and thought to be acceptable.

Yes, we will put the hopes of humanity in a space ship made of fucking plywood, and (one would assume) duct tape. 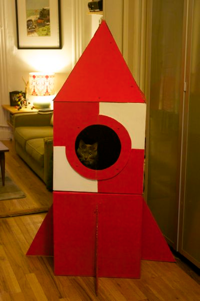 The next thing we agreed upon was that the people on board the S.S. Hiroshima would need gravity. You think people get a bit chunky here on Earth? Wait until they don’t have to worry about their weight at all. If we floated our asses to another planet, the indigenous beings on that world would announce our arrival with a headline reading, “Race of Intelligent Volleyballs Lands on Planet Zoop!” We’d be big, amorphous blobs of fat, or to put it another way, Milwaukeeans.

Finally, we got to the interesting part. We looked it up, and it is estimated that an Orion engine-propelled spacecraft with a spinning cylinder to provide gravity to its inhabitants and capable of growing its own food and recycling enough air and water for the journey would only be able to support around a quarter of a million people. And we’d probably only get to build one of them (I’m guessing due to a plywood shortage).

Think about how well humans get along with each other. Any two given neighbors will get into a vicious and never-ending blood feud over whether or not a tool shed is one inch over a common property line. Do you honestly believe that seven billion people will work together so that 250,000 people will be able to sip Bloody Mary’s in space while everyone dies a horrible, burning, death? Fuck, no.

And how would you choose the passengers? Politicians, being what they are, would certainly write the laws so that they’d get a prime seat. I wouldn’t have a problem with that, necessarily, as long as the ship was fired directly into the sun. But to prevent widespread revolt, there would have to be some sort of lottery system, and it would have to give every single person on Earth an equal chance of going. This, of course, would have some interesting side effects:

Journal Entry, Day 14: There sure are a lot of crazy homeless people on this spaceship. 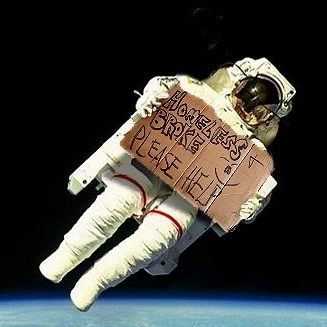 I think we’d be fucked. Even if you did convince people to work on the Splodey-Ship, they’d probably half-ass it. “Captain, we’re being sucked into Jupiter’s gravitational field!”

Our best bet would be to tunnel under the surface of the Earth diverting enough air and water underground to keep humanity alive while huddling next to the core for warmth, and hope like hell that neutron star flings us into space, and not straight into the sun.

So if you’re a customer of [redacted], and your shit didn’t work today, now you know why.