What’s With All The Pussy Cars?

I was driving home today when it struck me that the cars we drive these days are fucking lame. Not mine, of course. I drive a Jeep Wrangler, which is macho, and studly, and boy don’t I look like a motherfucking wildman with two child seats in the back of mine? But most of the other cars on the road suck in my eyes. This is because I was alive during the 70’s, which although it brought us terrible things such as leisure suits, disco, and Kenny Loggins (ahem), it also brought us great things such as Led Zeppelin, the original Saturday Night Live, and muscle cars.

Ahhh, muscle cars. Those were awesome machines. A light tap on the gas pedal and the pavement would shred under your tires, the sound of the engine roaring would shatter windows for blocks, and Arab dudes would light cigars with hundred dollar bills because those things went through some motherfucking gas. Now a lot of people like to point out that muscle cars were gas guzzlers, and that today’s cars not only conserve fuel by not allowing you to burn rubber just by looking at them, but because they’re aerodynamic as well. These people drive cars that look like suppositories for rhinos.

The worst of the lot are the owners of electric cars. They will buttonhole you and lecture you on what a fucking douche-canoe you are for not going green, but when their cars are charging at night and they’re in bed having wet dreams about jerking off whales or whatever, those electric cars are being charged with energy derived from the national power grid, 57% of which is derived from burning coal which is WAY more polluting than gasoline. Congratulations, you just made Al Gore cry, you bed-wetter.

It’s not that I don’t care about how much gas classic muscle cars go through. What makes them go is entirely irrelevant to me. I don’t care if they’re powered by a trillion gerbils on a wheel, foot power à la Fred Flintstone, or some inexhaustible fuel such as salt water or Al Gore’s sense of moral outrage. Just give me a fucking muscle car.

A lot of people like SUV’s because of the room they provide. Look, SUV’s are nothing more than tall station wagons. My station wagon may have been assloads of fun, but it was not cool. It was bright yellow and tended to elicit comments such as “Greg Brady called, he wants his car back.” Just because an SUV is a couple of feet higher off the ground doesn’t mean they’re cool all of a sudden. 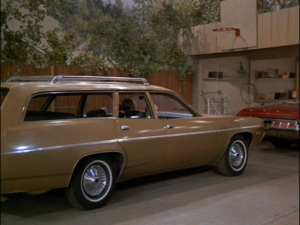 Greg Brady’s car. Picture this, only in banana yellow. I should have fucking hitchhiked.

Besides, muscle cars had huge trunks, large enough to hold not one, not two, but up to seventeen dead bodies in them. I should know! (Seventeen dead bodies, by the way, is known as one Dahmer, as in “Holy shit, it smells like you had a Dahmer of bodies back here!”)

(Digression: I’m just joking, I never really had a dead body in my trunk, although one time I kind of did. When I was in high school, a buddy and I cooked up a plan: We put my younger brother in the trunk of his car and drove around our rural neighborhood. We found a guy raking leaves and pulled over in front of his house. We pretended to look around to see if there were people watching (and pretended to fail to see him), opened the trunk, and threw my brother’s “dead” body into a ditch across the road and took off. When the man approached my brother, he sprung to life, shouted “No! No more! I can’t take the pain!” and ran off into the woods. We picked him up on the other side of the woods, high-tailed it home, and watched cop cars fly by every few minutes for the next couple of hours, laughing our asses off the whole time. Heh.)

Ok, look, this was a badass car: 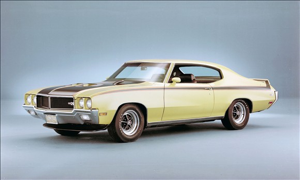 Yes, Buick actually used to make cars that weren’t for octogenarians or for Tiger Woods to crash into trees while running away from his wife. They made some honest-to-God kick ass cars. You could be driving to the grocery store, yet you’d look like you were on your way to avenge your family’s death by gut-stabbing a bunch of corrupt, smack-dealing cops. Awesome.

This, by comparison, is one of the top selling cars in 2012: 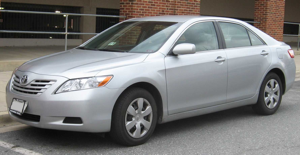 Is it a coincidence that the letters in Camry can be rearranged to form the girl’s name Marcy? Not when you’re as plowed as I am. This boring-ass sedan looks like it should be driven by someone whose idea of a fun time is double-entry bookkeeping. The Buick GSX would take the Camry’s fucking lunch money if they were to ever come in contact.

I can get behind pickup trucks to a certain extent. I drove one for about ten years. They’re utilitarian, they can be pretty powerful, and if you have an air mattress you can get some major lovin’ going on in the flat-bed (although you’re not exactly incognito, so make sure that day care parking lot is kinda empty before you get down to business). And if you wear a t-shirt and a cowboy hat, you look like the kinda guy that chews Skoal, hates immigrants, and gets cheap blowjobs from tweaker whores in truck stop parking lots. So, you know, if you’re going for that look, there you go.

But Steve McQueen wouldn’t have looked like a badass in Bullitt behind the wheel of a Nissan Frontier, he would’ve looked like he was going fucking antiquing for a new armoire. 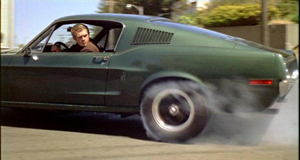 There is hope, however. This is the Dodge Challenger, which despite being named after an exploding Space Shuttle, looks cool as fuck. I bet you could get laid in the back seat of that thing and drive a Dahmer of bodies down to the river. Try that in a Prius. 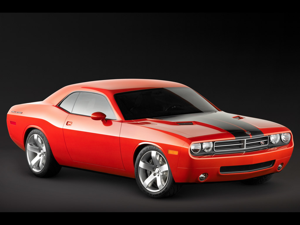 Extra bonus points for super-dark tinted windows. You could have a goddamn swinger’s party in there and no one would notice.