That’s A Real Diagnosis Once You Hit 40

I just got back from taking my daughter to the urgent care. Not that she need care urgently, or even really needed a lot of care. It’s just that under our insurance plan, an urgent care visit costs the same amount as a doctor’s visit and since it’s closer and takes appointments, we went there. If they had a place called Not Really Important Semi-Care, we would’ve gone there.

Anyway, my daughter is fine. She has what may or may not be an ear infection, so they prescribed some anti-biotics and sent us on our merry way. But as we were sitting there, it dawned on me that if I was a doctor, I’d play this song on an infinite loop in the waiting room. Especially if I was a pediatrician. Those little fuckers always take their health for granted. “Oh, you have a boo-boo? Wait till you get old and begin pissing small rocks, junior. Here, have an extra rubella vaccination you fucking whiner.”

While we were waiting for the doctor, my daughter and I got to talking, and somehow the subject turned to bowel movements. For those of you without kids, this is what happens to you when you reproduce. You start talking about shit, and you don’t stop for at least two decades. It’s crazy, but true.

Anyway, the bowel movements in question were of the canine variety. You see, back when I was single and carefree, I used to have three dogs because no matter how much I drank, I just did not destroy enough shit. Hence the dogs. Now the dogs were a lot like kids in that they fucked everything up, shit everywhere, and wanted to wake up at 5:30 AM. The only difference was that if they got too far out of line I could legally have them gassed.

So one morning the dogs woke me up at their customary hour by running laps around the bed and over my head. Usually, I let them out, they’d take care of bidness, and 15 minutes later we were all asleep once again. This time, however, I let them out and went back to bed, waking up at 9:00 AM.

Wondering where the dogs were, I opened the back door and had to yell out their names for a while before they came streaking from around the side of the house and ran inside. As I puttered around the house, I began to wonder why the dogs had been so interested in the side of the house. I’d never seen them over there, and all of a sudden this morning they spend close to four hours out there? Weird.

Finally, I threw some clothes on and walked outside to take a look. Apparently, my neighbor had someone come to trim the palm tree on the side of his property, and a lot of the resulting mess fell into my yard, including great big bunches of purple berries that apparently grow on palm trees. They looked like little tiny grapes, only there were roughly a million of them. And it was right at that moment that I realized what my dogs had been doing for 3 1/2 hours. 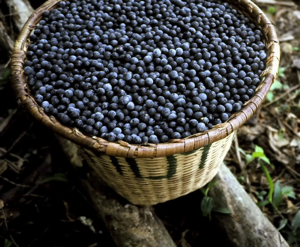 I ran back inside and realized that I was too late. The Beagle was spraying purple shit out of his little doggy ass while he was walking around the room. The Border Collie was hunched over, legs trembling from supporting her weight during what was certainly her biggest performance. And the Cocker Spaniel was wiping his ass on the carpet, scooting across the room.

The worst part about the whole thing was that this was a rental home, and the carpet in the room they had fouled, from wall to wall, was beige. Was, past tense. Because now it looked like someone had conducted some sort of horrible experiment involving Kool-Aid and Ex-Lax. If fucking Prince had dropped by, he would’ve said, “Wow man, that’s too much fucking purple.” It was bad, and I had very little time before the veritable ocean of purple shit set in the carpet and stained it permanently.

When I got done telling this story to my daughter, she was laughing so hard she had tears coming from her eyes.

That’s not too surprising, actually.