This post was originally going to deal with an important topic, one so universal in scope that it would appeal to the broadest number of readers possible; namely that Huey Lewis is a horse-faced retard. Seriously, what kind of fucking drugs were we doing in the 80’s? First of all, Huey Lewis became popular, and then, even more inexplicably, he was not strapped to the Space Shuttle and used as a heat shield while his shriek-filled last moments were beamed across the globe to the ever-lasting delight of people with fucking taste. I mean, what the fucking-fuck? Huey Lewis was rewarded with money, drugs, and (one would assume) deaf and blind women when what he truly deserved was a trip to the bottom of the Marianas trench in a 50 gallon drum.

Anyway, I thought it would be funny to call random businesses and say the following: “Hi, this Huey Lewis. You may remember me from such 80’s mega-hits as Hip To Be Square, and I Want A New Drug. Do you have anything to say to me?” And then I’d write down the non-stop stream of expletives and death threats that were sure to result. “Huey, as soon as I can get my hands on an electron microscope capable of finding your balls, rest assured that I’m going to kick them relentlessly for writing Power of Love you leather-faced, ass-clown.”

Alas, that probable Nobel Prize-winning effort will have to wait for another day because while I was getting situated in the Official Dogs On Drugs Office of Productivity/Bordello, I heard a song by the Moody Blues. Nothing, and I mean nothing works me into a rage like the fucking Moody Blues. Or, as they would probably put it:

That pretentious bullshit should be used against Al Qaeda. We would win the War on Terror in fucking seconds.

“Death to the Great Satan! Praise be to…”

“Ok, stop! STOP! No more! Please! We will all convert to Christianity, we swear! We’ll be good Episcopalians, promise! For the love of Jebus, just make it stop!!!” 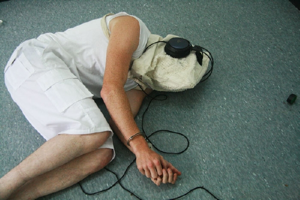 “Stop it! He’s had enough! No one has listened to two Moody Blues songs back to back and lived!”

One time, when I taught computer classes, I was teaching a Saturday afternoon Introduction to the Internet class, and this 30-something amorphous blob of a woman immediately began peppering me with questions about the Moody Blues.

Mental Defective: Excuse me, but am I going to learn how to find information about the Moody Blues in this class?

Me: Well, we’ll learn how to search for content via a search engine, we’ll learn how to navigate directly to a website if we know its address, and we’ll also learn how to “bookmark” links we like for future reference. That may not make perfect sense to you now, but the short answer to your question is yes, we’ll find you information on the Moody Blues.

Mental Defective: Ok, so how do I do it?

Me: Before we hop ahead to that, let’s go over some fundamentals, ok? We need to learn…

Me: You keep talking to me like that, and you can ask Jesus about the Moody Blues yourself, you extra-chromosomed fuck-wit!

Finally I just went over to her computer and pulled up the Moody Blues website to shut her the fuck up so I could teach the rest of the class, but that just made things worse.

Me: Ok, let’s talk about the Back button, and how you can use it to retrace your steps or get back to a web page that…

She actually used the word “dreamy”, which certainly did nothing to improve my opinion of her. Somehow I made it through the remainder of the class without feeding the Moody Blues Bitch her own teeth with a tire iron and I tried to forget her as best I could. Some weeks later, however, I ran into her at the local mall. She was wearing, naturally, a Moody Blues concert t-shirt; one of those ones that list all the stops they’d made on the back of the shirt. It read, “World Tour,” and then listed Reno, and Las Vegas. That was it. Weak. Fucking. Sauce.

Now, I’m not a big fan of sweeping generalities, but I think it’s fair to say that the Moody Blues are the worst fucking band of all time, and if I trained a brain damaged badger on mescaline to have seizures on top of a guitar that was on fire, it’d consistently come up with something more interesting than the fucking Moody Blues.

If the calculus of rock and roll dictates rankings such as:

…and some of the lesser known acts play out like this:

The Cars > Huey Lewis & The News > The Thompson Twins

…and the depths of rock and roll look like this:

…The Moody Blues occupy the very nadir of rock and roll:

Everything in the universe, and yes, that includes raping kittens > The Moody Blues

I actually liked the idea of calling random people and pretending to be Huey Lewis, and since I do a passable English accent (editor’s note: not really), I tried it out on a couple of unsuspecting convenience store clerks. (FYI, our main convenience store down here is called Circle K. There are five on every block.)

Clerk: No, and I’m fucking busy. What do you want?

Clerk: Circle K, this is Keith.

Me: Justin ‘ayward from your favorite band, the Moody Blues.

Clerk: Never heard of you.

Clerk: That’s why I’ve never heard of you. (click)

Clerk: Thank you for calling Circle K, this is Valerie.

Me: I’ve got two questions for you.

Me: What’s the smallest size condoms you have for sale?

Me: You don’t ‘ave anything for an ol’ English gentleman?

Clerk: (stifles a laugh) What size do you need?

Me: Wait! Wait! I ‘ad that second question!

Me: You want me to sing you a song, then? I wrote this a few seconds ago, just for you.

Me: That’s all I’ve worked out so far. Whaddya think, then?

Me: Bloody well right it is!

Clerk: Ok, well, lots of luck with that.