Another day, another headline about gunplay in an elementary school. In this case, it was an AK-47 wielding man who fired off a bunch of rounds because, yeah, that makes total sense. “God damn Obama! My taxes are too fucking high! I can’t get a job! And the Bilderberg Group secretly controls women, so I can’t get a hand job! I’ma murder me some motherfuckin’ toddlers!” Seriously, what the fucking fuck, people? I can’t say that there’s a preferred group of people to shoot in a maniacal rampage, but I’m pretty fucking certain children aren’t in that group. Get a fucking grip, or barring that, just go play with a toaster in the bathtub, asshole.

Whenever a horrific story like this hits the press, the inevitable happens: We work ourselves into a fucking tizzy over gun control. Should we make guns illegal, and pretend that everyone will run around all happy and carefree, and if anyone really needs to knock over a liquor store that they’ll use a bouquet of flowers to do it with? Or should we arm everyone, including infants the second they come out of the womb because everyone knows that armed newborns are a deterrent to delivery room shootings?

The argument would be comical if it didn’t have such important ramifications. We’re debating public safety and how it weighs against the 2nd amendment which, if history class taught me anything (and it didn’t), clearly states that bitches can vote. No, wait, that’s the 19th Amendment. The 2nd Amendment guarantees the right to bear arms. Actually, it’s worded a little differently than most people think:

A well regulated militia being necessary to the security of a free state, the right of the people to keep and bear arms shall not be infringed.

The little known 28th Amendment, secretly passed by Bill Clinton and Democrats late one night after a mescaline binge: The right to keep and bear sexbots shall not be infringed. Rrrrrrroooowwwwr!

People who are keen on children’s hospital-piercing bullets are quick to point out the back half of the 2nd Amendment. “The right of people to keep and bear arms shall not be infringed. How hard is that to understand, motherfucker?” (BLAM! BLAM! BLAM!)

And people who think that crime will magically go away if guns are made illegal are quick to point out the front half of that sentence. “A well regulated militia. Well. Regulated. Militia. What makes you think that you and your yahoo friends running around the woods shooting squirrels with fucking howitzers are well regulated, or a militia?” (Sips Chardonnay.)

Yes, I know that there are sensible people on both sides of the fence, but you tend not to hear them because all of the loons come out to espouse completely idiotic ideas based on their particular interpretation of a 222 year old piece of legislation written on a fucking loom.

Blah, blah, blah. We argue like crazy, every once in a while some minor piece of legislation gets passed that accomplishes nothing, one asshole or another takes credit for ending gun violence in America, and everyone’s happy until the next prick shoots up a fucking day care. Nothing gets solved. 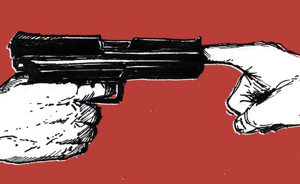 This makes more sense than what we do now, which is pretty much nothing.

The only honest way out of this predicament is that we have to stop relying on a bunch of dead guys who were so backwards that they had to get their kicks viewing pornographic ink blots. Look, the Founding Fathers were smart and forward thinking dudes, but they didn’t know shit about what was going to happen 220 plus years later. And because they were smart, they admitted as much: They gave us a way to change the core rules that our government was built on. It was if they had said, “Look, for all we know, the future will be a land of terrible technological advances, when men ride around in ox-drawn carts, shooting the powdered wigs off of their foes with blasts of pewter-shot fired from a fearsome gin mill of some sort. So if this law no longer applies, here’s how you go about changing it.”

And here we are, 222 years later, arguing over what Thomas Jefferson would have had to say about assault rifles, cop-killer rounds, and arming kindergardeners. Thomas Jefferson, if he were here today, would say, “Thou art a bunch of incredible assholes! Seriously, change the fucking laws to better suit your circumstances, you bunch of craven paltroons!” And then he’d go bang his slaves, because ol’ Tommy Jefferson was down with some motherfuckin’ slave sex.

All right, I’ve screwed around quite a bit, but I’m making a serious point underneath all the ox-towed gin mills of death jokes: Clearly, we are in an environment that the Founding Fathers could not have foreseen. And clearly, a piece of 222 year old legislation does not address our needs and concerns as well as something newly written. I mean, why is it so fucking hard for people to understand that? 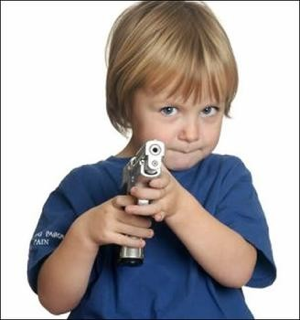 But we need to stop asking dead guys to rise from the grave and explain what the fuck they meant in the first place because they’re too busy playing air hockey with Jimi Hendrix on a giant puffy cloud to give a shit about our problems now. We need to solve them for ourselves.

(A quick note for my non-American readers for whom gun control is a non-issue: Don’t gloat. Remember, we’re heavily armed, and we shoot up fucking schools for kicks. You don’t want to make us mad. You wouldn’t like us when we’re mad.)