Some time back, I advocated firing David Lee Roth into the interior of the sun. That was wrong, and I would like to take this time to apologize to David Lee Roth for that post. Mr. Lee Roth, I formally apologize. Not because you don’t deserve to be shot directly into the heart of the sun, because quite clearly you do. If I mated Fran Drescher with 47 bagpipes and had the offspring host American Idol with a 90 minute cameo by Creed, it would still somehow be less annoying than anything that you have ever done in your life. No, I’d like to apologize because your seat on that rocket rightfully belongs to Miley Cyrus.

Holy shit, where to begin? First of all, I would like to say that I did not watch the VMA’s. I don’t watch TV, period (well, except for Breaking Bad), and I’d rather perform a home vasectomy with a cheese grater than watch something as insipid at the VMA’s. I was aware that something had occurred during the VMA’s and people were talking about it, but I just hoped that maybe they had a sarin gas leak and left well enough alone. Then a friend of mine sent me a video clip along with this sentence: “This is right up your alley. You’ll truly appreciate how horrible this is.” This person is no longer my friend.

Yes, I’m referring to Miley Cyrus’ VMA appearance during which she acted exactly as you would expect her to: Like an ugly, horse-faced, skank on drugs. And not even good drugs, probably some basement meth mixed with Kahlúa and administered anally. Rather than try to describe the entire travesty, I’ll break it down into phases:

Phase One – Frolicking With Bears, Looking Like A Horse

Miley began her performance emerging from the torso of a giant stuffed bear, the symbolism not escaping anyone: Miley Cyrus is high as a motherfucker on crack. She also started doing this thing with her tongue: 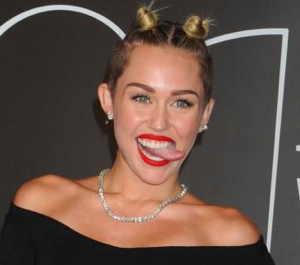 I can say this with 100% certainty. For someone whose face is regularly compared to that of a horse, sticking your tongue out like Mr. Fucking Ed is not a good look for you. Although at first I figured this was just an extreme form of cocaine face, I soon realized that this was Miley’s sad, pathetic attempt at starting “a thing”.

Miley Cyrus: And I was thinking, oh-my-God-I’m-so-high, I was thinking, I should start a new thing, you know? So, like, what should I do? It’s gotta be something that all the kids would do, something cool, something rad, something that’s never been done before, because oh-my-God-I’m-so-high, if I come up with, like, a thing, then I can, you know, go on tour and make assloads of money, because I’ve been blowing through it like crazy lately, and if I had a lot more, I’d buy a vacation home in the Andes because they’ve got this amazing blue coke from Peru, and I’d like put a fucking mountain of it in my living room and like, ski through all my coke every morning, with actual fucking skis and everything, and it’d be so cool, plus everyone has like, a thing, and my thing is kind of old and linked to Disney, which is so fucking lame I can’t even believe it, so I need to show people that I’m not like this princess, but like I do a lot of drugs and one time I fucked a homeless guy until he died which was funny as shit, but back to my point maybe I should just stick my tongue out way to the side, because that’s cool, right? Oh-my-God-I’m-so-fucking-high! Right?

McDonald’s Drive Thru Box: Ma’am, do you want to order some food or not?

Not “presents”, like, “And now, the makers of Valtrex presents… Miley Cyrus!” No, “presents” like, “The female panda, aroused and fully engorged, presents herself to the male, and mating begins.” 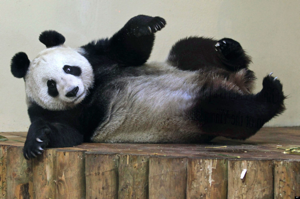 Actual footage of Miley Cyrus at the VMA’s

Seriously, Miley Cyrus spent more time bent over than Courtney Love at HeroinCon 2011. It was like she had a really bad yeast infection and was desperately trying to air things out a little bit. Making matters worse, she changed, on stage, into what looked like a bikini made out of Band-Aids. Ill fitting Band-Aids. It was… Well, to say it was disturbing would be putting it mildly. It was so disturbing that no one, and I mean no one, would ever, in the history of mankind get jiggy with it.

There’s not a whole lot more to say about that. Alan Thicke’s son. Jesus…

Miley Cyrus was annoying enough when her braying was limited to the Disney Channel and the damage she did tricking little girls into thinking that behaving like a spoiled fucking brat was a good thing, could be counteracted by a massive grounding and maybe a little electro-shock therapy. But now she’s reached annoying levels seldom charted outside of New Jersey, and I can’t even go through a day at work without hearing her washed up, flabby, malformed ass brought up in otherwise respectable company.

Miley Cyrus is a diseased twat-bag of almost epic proportions, and David Lee Roth, I apologize for hinting even indirectly that you are more annoying than she is, even if she doesn’t go “Bozadee bozadee bop zitty bop” like a drooling fucking imbecile.