As anyone who has read this site for even a short amount of time can tell you, I’m originally from Chicago. It’s funny, when I tell people that, people from Westernized countries will say “Chicago! Michael Jordan!” or something like that. This is to let me know that although their culture might seem different and backwards to me, especially in the department of taking a goddamn shower every now and again, they aren’t completely out of it. They know one thing about Chicago. People from Asia and Africa, however, will say, “Chicago! Yes, Al Capone! Bang! Bang!” You think I’m shitting you, but I’m not. This has happened to me multiple times, and I do not know why. Oh. I just checked the number of homicides caused by guns in Chicago last year (435). Now I know why. Bang! Bang!

Anyway, I’m from Chicago, and as I’ve mentioned before, this means that besides being associated with Al Capone, I’m also associated with shitty rock bands, namely Smashing Pumpkins, Chicago, and Styx. During the course of the above linked post, I illustrated how lame the band Styx can be by embedded a song called “First Time”, which I think is about the first time keyboardist/vocalist Dennis DeYoung fisted himself, although I can’t be sure because I can’t listen to more than 6 seconds of that fucking song without going out to commit a major felony to balance things out a bit.

And as I pointed out in this post, once you watch a video on Youtube, the Google Algorithm of Evil will ensure that Youtube recommends similar videos if it has registered any level of loathing or disgust coming through your keyboard, no matter how small. This is how I stumbled across a video of Dennis DeYoung performing the songs of Styx with a band that looks like Styx, but isn’t, but more than makes up for it by being, impossibly, even lamer than Styx. I was going to embed the video here, but I decided not to. I embedded a video of Angela Lansbury masturbating in a tub, mind you, but Dennis DeYoung in concert was judged to be Too Much. It’s that bad.

The only redeeming quality of this video is that Dennis DeYoung, or at least the alien species that has temporarily taken control of his withered husk acts so tremendously stoopid, that we may use it as an anti-primer for aspiring rock stars, a catalog of things not to do if you want anyone born after the year 1850 to think you’re cool, or worthwhile, or deserving of living for a few more moments.

Ladies and gentlemen, I give you the Dennis DeYoung Catalog Of Rock Pose Failure

The Pose: The Holy Shit Someone Showed Up To See Me Look Of Astonishment 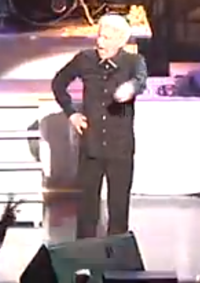 Dennis does the whole dramatic entrance after the band has started playing schtick, walks to the front of the stage, points to the sparse crowd and looks at them as if to say, “Holy shit! You guys are here to see me?” Maybe not. If Dennis’s manager is smart, he’d book the Dennis DeYoung band near assisted living facilities and live off of confused Alzheimer’s patients who are expecting to see Tommy Dorsey. Anyway, act like you’ve been there before, Dennis. Acting shocked at the size of the audience when you’re playing Knebworth is cool. Acting shocked that 14 people showed up is something else entirely.

The Pose: Groping The Guitarist 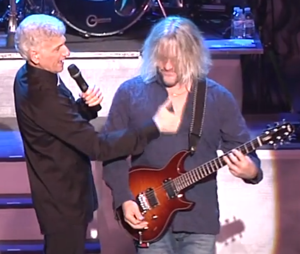 I swear to God, less than two minutes in, Dennis DeYoung is going for second base with his guitarist. To be fair, he’s doing this as he sings the words “Your heart is pounding”, but that probably isn’t a whole lot of consolation to the poor guitarist who is simultaneously wondering if this band has an HR department to complain to and wondering if any of the upcoming songs have the words, snake, rod, or Johnson in them.

The Pose: Flicking The Bean 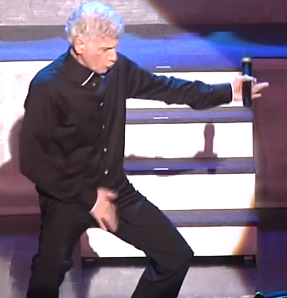 Well, that second base action must’ve gotten Dennis hot, because now he’s flickin’ the ol’ bean on stage, a move that would make Miley Cyrus proud.

The Pose: The Shush 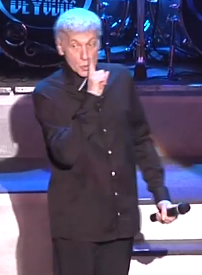 This is just unnecessary, Dennis, as any number of people in the audience are willing to tell you and your band to shut the fuck up.

The Pose: The Dickensian Street Urchin 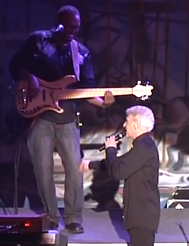 Dennis DeYoung, tugging on the pants of the bass player. “Please, sir, may I have a ha’penny?”

I honestly don’t know what he’s doing here. It’s like a cross between Gagnam Style and a tantrum thrown by a toddler who just wants a FRUIT CUP!!! I’d like to take the time to point out that the total elapsed time between the first pose and this pose is around two minutes. It’s not like I’m cherry picking these poses or anything. Dennis DeYoung is like acting like a goddamn chimpanzee on mescaline.

The Pose: The Flying Retard 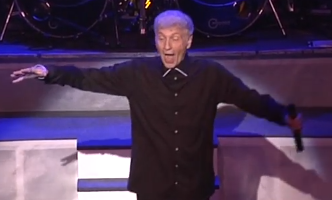 If this guy would’ve followed Miley Cyrus at the VMA’s no one would have been talking about her. People magazine would have given Dennis DeYoung the cover and he’d have looked like a maniacal, grinning Q-Tip over the words “Special Needs Rock Star”.

The Pose: The “Do You See Something In My Ear?” 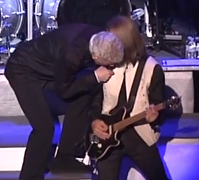 That’s the innocent name of this pose, by the way. He does this immediately after singing the words, “Turns me on when I’m lonely,” so a more accurate name for this pose might be, the “I Want A Closeup Look At Your Nipple”.

The Pose: The I’m Off My Goddamn Meds 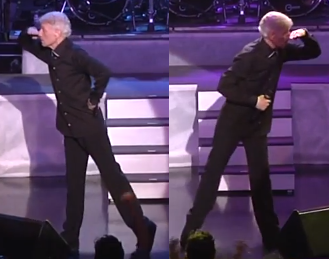 Total elapsed time between those two shots? Two seconds. Wherever you’re at, even if you’re at work (especially if you’re at work), stand up and try to strike those two poses in two seconds flat. Not easy, is it? Dennis DeYoung wants you to know that being apeshit loonball crazy is not easy. Perhaps you’d like to see him play at your local community center some time?

I wish I would have done a better job converting this to a GIF, but I have a strict rule: The day I spend more than 30 seconds creating a gay Dennis DeYoung ass-grinding GIF is the day I perform a self-tonsillectomy with a fucking bazooka. Which is a shame, because at full speed you really get a sense of the how wrong this looks. There is WAY too much lateral ass-sliding for my liking. For anyone’s liking, really. Liberace would’ve fucking blushed.

The funny thing about this shot, and the second base pose, and the nipple closeup is that Dennis’s wife is a goddamn backup singer. She’s right fucking there, Dennis! She can see everything!