The smartest thing my parents did when they bought their dream house in 1974 was to dedicate a single room in the basement to their three sons. “Here,” they said, “if you’re going to do anything bad in the house, do it in this room. You’re free to do whatever you want in here.” And they meant it, too. We wrote on the walls, broke light fixtures, and left that room looking like a tornado had hit the Mattel corporation, and they never said a word. Not even when my older brother, during a furiously contested game of indoor basketball, threw me through the drywall and into an entirely different room. I’m sure there were limits to the immunity they had granted us. I mean, it’s not like we could start doing needle drugs and hookers down there (we had a different room for that), but any of your garden-variety male offspring destructiveness was accepted with a shrug, just as long as it never left that room.

Now that I have kids of my own, I long for that basement room . I live in Arizona, and we don’t have basements here. When I bought my first house down here, I asked about getting a basement. “Oh, we don’t do basements,” was the answer I got. “There’s a certain kind of soil, and if we run across it while digging a basement, we have to use dynamite.”

“Then I’ll do it. Give me the dynamite and show me the hole in the ground, and I’ll take care of the rest.”

But as it turns out, builders are leery about giving sticks of dynamite to every drunken yahoo that wanders into a model home because he thought there was a party there. “Fine,” I said. “I’ll just build the meth lab in the attic, then.”

So, like everyone else down here, I live in a house with no basement. This has some negative consequences. First of all, most people designate at least one room in their basement for storage. When you don’t have a basement, you don’t have storage, so you make up for it by storing things everywhere. This is how hoarding starts. You start off by putting a couple of old newspapers of interest on a card table in the corner, and the next thing you know you’re finding the mouldering remains of an Amway salesman under a pile of 20 year old soiled diapers. (I know, I know… It’s disgusting to let 20 year old soiled diapers come into contact with an Amway salesman. Gross.) 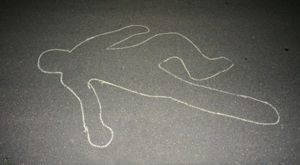 In most states, killing an Amway salesman is a misdemeanor. The More You Know!

The other negative consequence is that when your children begin to perform household experiments, they tend to do them in important areas of the house that get used for things other than dead hooker storage, like the kitchen. My eldest son, for instance, once performed the Apple Juice Container Integrity Test by dropping a full container of apple juice onto the kitchen floor. And then, the very next morning, he followed up on his research by conducting the Milk Carton Integrity Test.

Now, if these experiments had happened in the basement, I could have cleaned up the resulting mess with a hose, or better yet, just waited for the next flood. But because I didn’t have a basement, I had to DO SOMETHING, which is total bullshit. I didn’t have kids so that I’d have something to do. I had kids so that I’d have funny shit to write about.

Another thing my kids like to do is draw on inappropriate things. Once again, if this was in the basement I’d be ok with it. Hell, I’d join in. “That’s not how you draw tits! Here, watch a master at work.” But when these drawings appear in a non-basement context, it’s a problem. (The neighbors begin to look at you strangely when your front door has the words “Poop Balls” scrawled on it in Sharpie.)

Digression: That’s not to say that house graffiti can’t be well executed. One time my younger brother and I were watching some old, forgotten British comedy on TV (actually, it was the Kenny Everett Show), and there was a skit that involved a song with the following lyrics:

Now we had no idea who Tony Benn was at the time (still don’t), but that didn’t stop my brother from writing, in pen, in an incredibly hard to see spot in the house, “Who’s gonna vote for Tony Benn?” When my mom got rid of the house some 25 years later, she called me up out of the blue to ask me, “Do you know who Tony Benn is?” which made me laugh for a month. 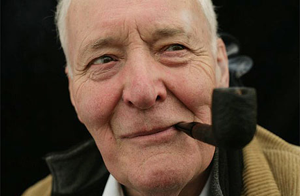 This is Tony Benn. What the hell, I’d vote for him based solely on his resemblance to Hugh Hefner. (This would put me in the top 5% of informed voters.)

But the biggest problem I have without having a dedicated and hidden from public view room for the kids is the fucking toys. Holy shit, do you know how fast a box of LEGOs can be distributed into every corner of the house? 4.3 seconds. I swear, one moment I’m building a LEGO race car for my kids in the family room, and the next second I’m pulling a tire assembly from a bleeding wound in my foot in the bathroom.

My dog keeps his toys in somewhat reasonable order, and he mainly sniffs his ass all day. I should expect better behavior from my kids, shouldn’t I? I guess not. I should just learn to accept that toys wind up wherever they wind up, and there’s no more rhyme or reason to it than there is for any other random occurrence. This is an actual, verbatim conversation I once had with my eldest son:

Me: Why is there a Mighty Morphin’ Power Ranger in the freezer?

Son: So that’s where that went!

(The color thing still puzzles me.) 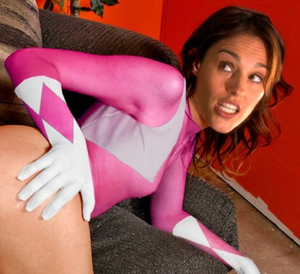 My parents were so smart. They just gave us a room in the basement, and they were more than happy with whatever we did. Or maybe they weren’t so happy, after all. After my mom moved out of the dream house, the new owner discovered that it had a MAJOR radon problem in the basement. Having radon in the basement is like smoking a pack a day, and my brothers and I were down there all the time. For all I know, my parents were upstairs, having a drink, thinking to themselves, “Tony Benn. Yeah, laugh it up funny boys. You can draw on the walls while getting chemo.”

But probably not. My parents were wonderful, caring, and attentive people who just didn’t want to have to deal with Power Rangers in the freezer or profane front doors. And neither do I, for that matter, which is why I’m on my way to go get me some fucking dynamite.