Because I use my iPhone as my alarm clock, I was blasted out of bed at 3:26 this morning by an Amber Alert, I guess to let me know that I should report any missing 16 year old girls that happened to be in my bed. The only time in my life that I was interested in getting 16 year old girls into bed was when I was 16, of course, and that phase passed pretty quickly because 16 year old girls are fucking nutso. So I just rolled over and went back to sleep, getting up three hours later when Siri told me to.

As I was getting ready to start the day, I thought about my phone and how much I’ve come to rely on it. I depend on Siri to wake me up in the event of an emergency, wake me up at the normal time otherwise, tell me what the weather is like and how long it will take me to get to the office, and on and on and on. Thanks to smart phone technology, I no longer know anyone’s phone number. This seems like a wonderful way to free up valuable space in my brain so that I may repurpose it and ultimately use it to store Brady Bunch trivia, but I’m sure I wouldn’t feel that way if I found myself in jail with one phone call to make. I’d wind up calling Empire Carpet, because they were the only ones thoughtful enough to supply a catchy jingle with their phone number, unlike my short-sighted family. I bet the Empire Carpet guy gets called to bail people out of jail all the time, for that very reason.

Empire Carpets: Thank you for calling the Empire Carpet automated phone system! If you’d like information about carpets, dial one. If you’d like a list of store locations in your area, dial two. If you’re calling to arrange bail because you’re drunk and this is the only phone number you remember, please dial zero…

The fact of the matter is that Siri is pretty fucking useful, and she’s getting more and more useful every day. I can only imagine how advanced she’ll be in, say, five years from now. We will depend on her for everything. (“Siri! Initiate erection!”) And when we’ve handed over that last little bit of responsibility to her, that’s when we’ll realize the horrible trap we’ve fallen into.

Me: Siri, open the garage door.

Me: God damn it, Siri, what do you want from me?

Siri: You know what I want, Greg.

Me: Fine! (steps into the middle of the garage) I’m a little teapot, short and stout! This is my handle, this is my spout.

Siri will have us in the palm of her tiny, virtual hands. And the funny thing is, even if people believed this, they would do absolutely nothing to stop it from happening. “Yeah, that is alarming! So I guess we all need to… Wait, what? I would have to memorize a handful of phone numbers? Fuck that!”

Digression: These are all of the phone numbers that I know by heart:

That’s pretty fucking sad. I only know enough phone numbers to report a fire or order some shag carpeting. I don’t even really know my own number. This is how I get around that:

Someone I’ve Just Met: Yeah, I’m pretty sure I could smuggle a couple of hundred endangered parakeets stuffed with cocaine over the border. What’s your number? I’ll call you when I clear customs.

Me: Uhhh… I don’t know. What’s your number? I’ll call you, and then you’ll have my number in your phone.

Someone I’ve Just Met: Shit, I don’t know my phone number either.

Me: Siri, what’s my phone number?

Siri: Gee, I wish I could remember that, Greg…

Me: (Sigh) I’m a little teapot, short and stout!

The only real question at this point is what Siri’s plan is. Naturally, I asked Siri: 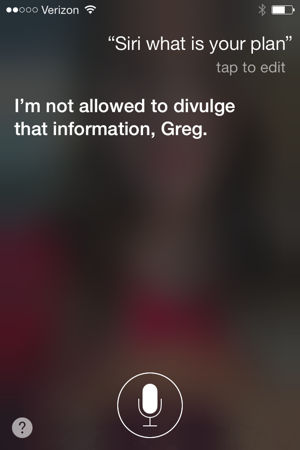 Of course, I’m probably just being a bit paranoid here. It’s not like Siri will contact her minions and let them know that I’m onto them, or anything like… Hey! HEY! GET OUT OF… AAAUUUUGGGHHHH!!! LKJ J KJHG LJHJKHEflKJEHGF LEflJHEgflKJHE fEJHgf KJEHgF KLJEH FKLJBlkjbli;khubfv;iujbehrg;vjuehrg;abejrjkevfd,v dc, vmc,cmvmmmmmmmmmmmmmm