Women, for some strange reason, have this thing about fucking rock stars. It baffles, me, but it is undoubtedly true. The fact that Billy Joel has ever been laid proves my point. Billy Joel is so ugly that if he was a car wash attendant women wouldn’t let him pet their dog. But put him behind a piano with a large wad of cash in his wallet, and the panties hit the floor. Un-fucking-believable.

One time, I asked a female friend of mine named Lauren why this was true. “Low self-esteem,” she said without hesitating. “The thinking seems to be, ‘He could have any woman he wants, but he chose ME!’ It’s pathetic.”

Then we ran down a list of rock stars that she would willingly sleep with. This did not end well.

Me: Oh, God, you would sleep with Mick Jagger? Really?

Me: What about the current, mummified Mick Jagger?

Me: You are a dirty, filthy whore.

Lauren: I am filled with shame.

(To Lauren’s credit, she insisted that given a choice between sleeping with Steven Tyler and having dental work performed with a chainsaw, she’d opt for the latter even if there was no Novocain involved.)

Regardless of the reason why, women continue to fuck rock stars, and as a service to the general public (which I’m hoping satisfies the terms of my probation) I present to you the Dogs on Drugs Official Woman’s Guide To Fucking Rock Stars:

Who should I fuck? Rock stars, the kind that play actual rock and roll. Singer/songwriters might seem really romantic and like they’d be gentle and caring, but they’re way, way, way too sensitive. Remember Paul Simon? 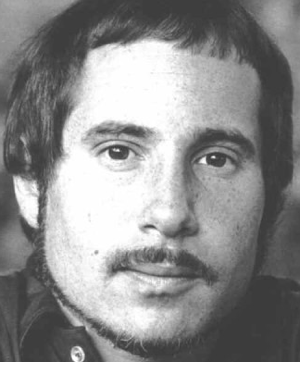 Source: To Catch a Predator

Edie Brickell fell for his sensitive artist shtick some years back but finally tired of his incessant weeping and took to bitch slapping him whenever he displeased her. She currently refers to him as a “sawn-off pussy” and once entered him in the Westminster Dog Show, explaining to the judges that he was “by far the most obedient bitch on the East Coast”. She then walked him around the ring and even gave him a treat when he made wee-wee on some laid out newspapers.

This is sad and you don’t want it to happen to you, so stay away from the sensitive types. Also make sure that you don’t hook up with a flash-in-the-pan. If you feel the need to hook up with a one-hit-wonder, remember, you could be sleeping with this generation’s Rick Astley.

Also stay away from aging tween-dreamers like Justin Bieber. (You’d think that would go without saying, but someone is buying that kid’s bullshit.) They’re terribly immature, and unless you’d like someone to be motorboating you around the clock, you’re better off looking elsewhere for your pathetic validation.

Rappers don’t count as rock stars because they lack even the most rudimentary of musical skills. Seriously, that shit sound like shoes in the drier. But if you find yourself tempted, ladies, here’s a general rule of thumb: If a prospective partner calls you a “bitch” or a “ho” more than seven times in the first minute, his idea of attending to your needs probably consists of cock-slapping you and then pushing you out of the limo once it drops below 30 mph.

So stick with conventional rock stars. Sure, they may be sick, depraved bastards who fornicate like apes on ED medication, but at least they’re conventionally depraved, and they do know how to write a song, so with any luck you’ll be able to tell your grandkids someday that you were the inspiration for “Gutter Slut Gals”.

“What? I thought that song was about me!”

Which Member Of The Band Should I Fuck? Here’s who you don’t fuck: The lead singer. The lead singer is the face of the band, and his carefully groomed bad-boy image combined with the ability to stare wistfully into a fan’s eyes while singing of his deep and burning love makes picking up women like shooting fish in a barrel with an ICBM.

But lead singers are ego-maniacal, self-obsessed jerks, or to put it more simply, lead singers are David Lee Roth. Eww. Plus, given the large amount of partners they’ve had, you’ve got some serious health concerns to worry about if you find yourself in the clinches with a lead singer. I mean, they’ve got crabs that have STD’s.

You know the song Joy to the World? No, not that one. The one that starts with the lyrics, “Jeremiah was a bull frog”. Yeah, that one. The lead singer of that group, Three Dog Night, got laid so much that one night his dick exploded. Really. His. Dick. Exploded. Do you want to be anywhere close to a dick exploding? No. No, you do not.

Also stay away from drummers. Drummers are motherfucking crazy, and tend to do crazy things as a matter of policy. So if you hook up with a drummer and wind up waddling out of the dressing room with a pole lamp sticking out of your ass, don’t say I didn’t warn you.

Bass players and rhythm guitarists find themselves constantly outside the spotlight, and they resent the hell out of this. Unfortunately, they take their frustrations out on groupies, going out of their way to humiliate and denigrate them. Hook up with a second-tier band member and you can expect to get gang-banged while a roadie records the moment for posterity in high def so that they can mail a copy of it to your grandparents six months later.

What should I wear? When you first meet a rock star, you’ll find yourself vying for his attention along with a lot of other sad, desperate women. You’ll need to stand out if you want to have any success, so be sure that you use lots of makeup. You know how in nature films they’ll show a baboon with a giant, multicolored ass and the voiceover guy will explain that this is a sign that the female is in heat? That is the effect you’re aiming for. Be sure to use plenty of Whorish Red, Slutty Blue, and for the love of God, don’t forget to put glitter on your tits.

Speaking of tits, the bigger the better. If you find yourself under-endowed in this regard, you’ll need to get creative. (Pro tip: Inflate to 12 psi.)

Should we use protection? Good question. This is the offspring of a rock star. What do you think? 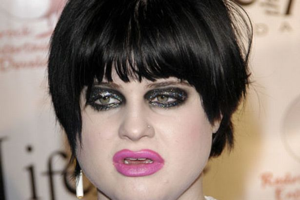 If Moe from the Three Stooges had a penchant for slapping on makeup and picking up dock workers at 4:00 AM, this is what he would look like.

Besides, rock stars have got STD’s like Milwaukeeans have back fat. Members of the Foo Fighters have been known to give fans chlamydia during phone sex. Remember Creed? The lead singer of Creed gave himself an STD somehow. Your best bet is to engage in foreplay via smoke signal, and when it comes time to do the deed, quickly and subtly hop inside an industrial strength trash bag.

Speaking of Creed, do you know of any funny anecdotes involving their lead singer, Scott Stapp? Amazingly, I do. I read this story about how Scott Stapp got his sister to drive him across the state to hook up with a chick at Denny’s, only to have everyone there laugh at him. It is pathetically awesome, and the important takeaway from the story is that Scott Stapp is an incredible douche.

What is the protocol once a sexual act with a rock star is complete? You might be the rock star in question’s biggest fan, knowing all of his songs, his vital statistics (Blood type: AB positively dreamy!), his home town, and even his favorite cereal (Quisp), but it is important to remember that to him you are nothing more than a lust receptacle, and as such are expected to disappear the instant the sex act is over. (This is a reasonable request in that what he would really like is for you to turn into a bottle of whiskey, or bindle of heroin.)

After that, tradition dictates that you alternate between elation and self-loathing for a period of three months once you decide that being forced to wear a bridle during intercourse is kind of degrading. On the plus side, at least he didn’t crop your ears.

You should tell all of your friends that it was a magical moment involving candlelight, soft acoustic guitars, and a ride home in a limousine full of roses afterwards. In other words, lie your ass off (if you can even get the pole lamp out of it). There is simply no way to class up the fact that you got sodomized in a hotel lobby in front of a horrified crowd of Japanese tourists.

I fucked up, and now I’m pregnant by a rock star. What do I do? This is a big moment in your life, a crossroads. Which is why it is going to anger you so much when the band’s assistant road manager shows up at your front door with a stack of cash, a bottle of tequila, and a coat hanger. The fact that the baby’s father sent along a signed card reading, “To Julie: Fondest regards!” will not improve your mood any, considering the fact that your name is Ann.

You have two choices in front of you: Get rid of the baby and pocket the cash, or go public with the pregnancy and face the scorn and derision of everyone you know once they find out that you got busy with Huey Lewis (what the fuck were you thinking?) Given that Huey’s offspring are bound to look even more horse-like than Sarah Jessica Parker, I’d say you’re better off taking the cash.

I tried to fuck a rock star, but he turned me down. How am I supposed to feel about that? Elated.