What The Fuck Is Wrong With Miley Cyrus’ Vagoo?

Also, when you ask the question, “What the fuck is wrong with Miley Cyrus’ Vagoo?” that implies that you want to hear the answer, and that may simply not be true. It’s kind of like asking yourself, “I wonder what’s the craziest sex Henry Winkler has ever had?” It seems an innocent enough question, but if someone then told you that the answer was “the time Fonzie cornholed your comatose great-grandfather Earl”, everyone has lost. Especially Earl. Do you really want to know what the fuck is wrong with Miley Cyrus’ nether regions? Probably not.

But I’ve been staring at this picture sitting on my home page for a few weeks now, and it nags at me. What the fuck is going on down there? 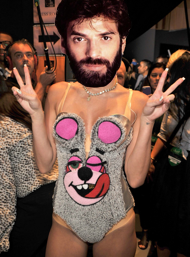 All right, a bit of explanation might be in order here. A while back, I started posting pictures of Kenny Loggins under the caption “Random Kenny Loggins Photo of the Week”. I did this because of traumatic brain injury I suffered as a child, which sometimes makes me do unpredictable kazoo monkey overture zingers. Also, because it’s funny. Who doesn’t enjoy seeing Kenny Loggins head appear on the shoulders of a man sodomizing a horse? That’s classic comedy, if you ask me. If you ask Kenny Loggins, he might have a different opinion, but screw Kenny Loggins. He fucks horses, that sick bastard.

When I dropped his head on top of Miley Cyrus, however, I inadvertently became aware of her crotch region. This region had previously been engaged in frantic rubbing all over other celebrities, probably in a vain attempt to catch talent like a venereal disease. But now I actually got a look at it and… Well, something’s not right. Take a look:

When Patrick Bateman thinks it’s fucked up, you’ve got a problem.

It looks like she’s got a goddamn giant doughnut in there, doesn’t it? I mean, what the fuck?

There are a few possibilities I can think of as to what might be going on, and since those cowards over at Miley Cyrus’ management company haven’t been helpful (seriously, guys, a restraining order?) I may as well lay ’em on you.

First of all, it is important to note that Miley is pictured at the VMA awards after she’d just got done treating Robin Thicke like a piece of toilet paper. It was a bizarre performance, even more bizarre for the fact that she had planned it ahead of time. Normally, when people do crazy shit, it’s off of the top of their heads. Like when you see some random naked guy furiously dry humping a napkin dispenser at McDonald’s, you know he didn’t wake up that morning and think to himself, “Say, I think I’ll dry hump a napkin dispenser today!” No, he let his inner muse take over and just did what came naturally to him.

But Miley Cyrus PLANNED all of that bat-shit loonball behavior, which makes me think that maybe her distended vagina was part of a bigger plan that she didn’t get around to executing, possibly because she was too busy being a giant whore. Imagine Miley Cyrus saying this in rapid-fire cokehead fashion (which, trust me, will not be hard to do):

Miley: Ok, so, like, I’m going to come out there sticking out my tongue, yeah? And I’ll be wearing this one piece thing like a bear or a cat or whatever the fuck, but look: It will have its tongue sticking out too, right? So that’ll be a thing people do. They’ll be like, Miley! and stick their tongue out. It’ll be huge. And anyway, then Robin Thicke comes out, and I whip off my clothes and it’ll look like I’m naked, but really I’ll be wearing this Band-Aid colored outfit that doesn’t fit really well and makes my ass puddle out on the sides. Anyway, I’ll like totally grind up against Robin Thicke. I’ll also be hiding a kielbasa in my crotch, and I’ll whip it out and place it on Robin’s junk and then pretend like I’m giving him head, only after a while I’ll start, like, tearing chunks off with my teeth and spitting them into the crowd, and everyone will be freaking, but then my friend Otter, you know who I mean, right? Otter? That guy who gets me blow in Malibu? His name is Jeff, but everyone calls him Otter. So he’ll come swinging down on this giant trapeze dressed like a real otter, you know, the animal? And I’ll, like, take out a shotgun and shoot him right in the chest, only when I pull the trigger a bullet doesn’t come out, or whatever, it’ll be like glitter, and it won’t be Otter, it’ll like turn into ME! And then I’ll say “I love you all!” and drop the mic like a total badass and ride offstage on a Harley. Would that be fucking cool or what?

Police Officer: Well, I was going to ask you for your driver’s license, but now I’m just going to arrest you on general principles alone. 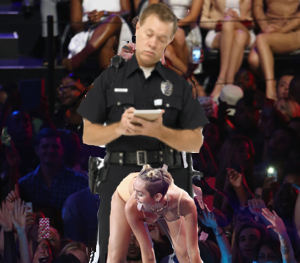 Gee, I wonder how Miley would try to get out of that?

Another possibility is that Miley has got some sort of horrible disease going on down there, like elephantiasis of the labia, which is a condition I just made up, or so I thought until I Google Image Searched it and let me just take a quick second to say the following:

Do NOT Google Image Search the term “elephantiasis of the labia”!

Anyway, she might have got something along those lines because Lord knows any respectable gynecologist would refuse to have her as a patient.

Receptionist: Dr. Stern? Miley Cyrus is here. She’s been rubbing her crotch against celebrities again, and it’s swollen up like a dead hobo in July.

And without medical attention it will just get worse. It may look like a doughnut now, but next year at the Grammy’s, people will be asking themselves, “Why does Miley Cyrus have a radial tire sticking out of her crotch?”

There are other theories, of course. I spent the better part of the afternoon polling my fellow employees, and took down the most popular responses and made them into a pie chart: 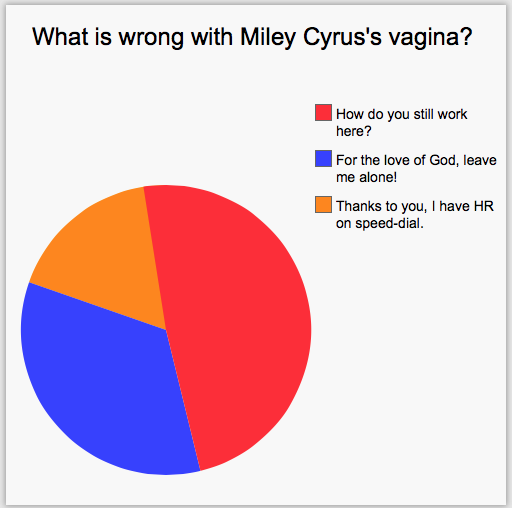 Unfortunately, we may never know the real answer. She could be carrying some of Michael Jackson’s body parts around in there as some sort of demented pop-music talisman for all I know, although to be honest, that’s kind of unlikely. If Miley Cyrus walked around with her crotch smelling like a corpse, people would notice the improved odor and start talking.