You ever have someone point out something unsettling to you and the very instant you hear it you know that it will stay with you for the rest of your life? That happened to me recently, and I’ve made it my mission in life to scar as many other people with it as possible, and so now you have to read about crotch fruit. You’re welcome.

Here’s the deal: Produce at the grocery store is generally displayed in nice, geometric piles of “Heartland Freshness”™ which is a trademarked phrase that I just made up so that if some hapless bastard uses it at some point in the future, I can sue him into the goddamn poorhouse and then kick back and laugh about it while I light a Cuban cigar with a burning orphan, or whatever the fuck it is rich people do to celebrate when they piss on the poor.

Anyway, you walk into a produce section, and all of the produce is stacked into pyramids, or at least it was until my fucking kids show up on the scene. My kids treat a produce section like Godzilla treats Tokyo. They just fuck that shit up. “Hey, dad! How does this cucumber look?” my son will shout, pulling out the load bearing cucumber from the bottom of the stack and unleashing a deadly cucumber-lanche. I, like all thinking adults who huff gasoline for breakfast, very much fear being buried alive in a cucumber-lance, which is why I never venture into a produce section without bringing a St. Bernard bearing a miniature barrel of whiskey around his neck, although truth be told I don’t have a St. Bernard, so usually I just carry an open bottle of whiskey with me wherever I go. Sure, it raises some eyebrows at day care, but fuck those guys. They don’t ever have any pot when I ask, so what fucking good are they?

Back to the produce: I used to work in the produce section of a grocery store, so I know what it’s like when someone fucks up the meticulously engineered Pyramid O’ Food™. It sucks. It is a real pain in the balls. But I don’t give a rat’s ass because it is a pain in the balls that is passed down from generation to generation and must be experienced by produce workers to truly appreciate that grand produce worker tradition: Getting higher than a fucking kite behind the store during break. 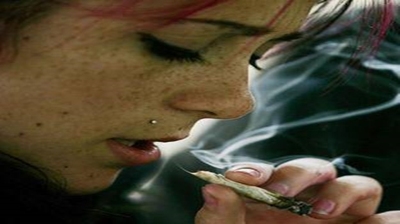 Clean up on aisle five, my ass!

I am often tempted to volunteer my previous grocery store employment when I am out shopping, but I never do because the people that work at my local grocery store are full grown adults and I’m 100% sure that this is how that conversation would go:

Me: You know, I used to work at a grocery store!

Me: Oh, uh… I’m sure you’re really smart though.

Cashier: (begins stuffing my lunch meat purchases in her armpits)

Me: I mean, you’ve attained the rank of… What? Head cashier? Or something?

Cashier: I work 87 hours a week and they pay me in expired pickled pig’s feet.

Ok, let me get to the point, which is that there really ought to be some sort of medical evaluation performed before they allow someone into the produce section. I’m just getting over a nasty cold, and everyone that I’ve told this to has the same advice for me: “Eat lots of fruit!” This advice then sends me to the grocery store where I paw over the fruit, spreading my nasty germs everywhere. I don’t think the fruit helps get rid of the cold, it just spreads it around so much that I don’t feel so bad about being the only one with a cold. Misery loves company. And apples. 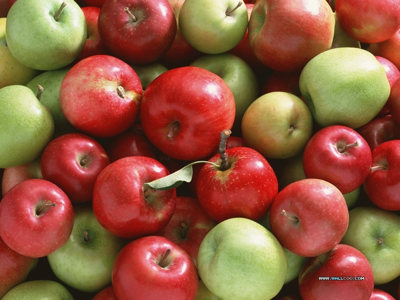 They should have some sort of fruit freshness indicator, now that I think about it. A Freshness Guarantee!™©. Something that lets you tell at a glance that the apple you want meets your high standards. The scale would be something along the lines of:

That way I wouldn’t have to pick up every last piece of fruit, squeeze it, pinch it, lick it, jam it down my pants and go out and run a couple of miles with it or any of the other, patent pending methods I have for judging produce freshness. (What? Oh, like you haven’t run a half marathon with your shorts full of grapes.) Not that I know what the fuck I’m doing when I perform these tests. I just hate it when some old, wizened bag happens over and gives you Freshness Lessons®. It makes me feel stupid, like I’ve been outsmarted by a goddamn tomato. So I pretend to be running advance genetic tests on carrots when really all I’m thinking about is crotch fruit.

Oh yeah, crotch fruit. That’s what I’ve been meaning to write about. Ok, here’s the deal. The pyramid of produce on each stand is positioned so that the fruit at the base of the pyramid is right at crotch level, meaning if you’re not careful when choosing your produce, you might wind up eating a tomato that has been dry humped by half of the fucking neighborhood.

Worse yet, because the Pyramid O’ Food©®™ collapses from time to time, there’s a pretty good chance that the dry humped produce will be put back in a different part of the pyramid, meaning there is absolutely no way to tell whether or not that kiwi you just ate has been ball-slapped by some dirty pervert with festering chancres.

And yet, I’m somehow the pervert for trying to put all the fruit into condoms. And they made me throw away my bottle of whiskey. Fuckers.