One of the things that I didn’t expect when I moved to Arizona is that from time to time I would have to deal with hurricanes. Hurricane Norbert blew through town yesterday, and let me tell you something: Phoenix is wetter than Rosie O’Donnell in a women’s prison right now.

If a storm with sustained winds above 70 miles per hour originates in the Atlantic or the Pacific Northeast, we call it a hurricane. All such storms that hit or threaten the United States are called hurricanes. If it originates in the Pacific Northwest or the Indian Ocean we call it a “Who the fuck cares?” because those brown-skinned savages don’t pay taxes, and if they don’t help fund the NOAA, what fucking good are they? Filthy animals.

I was very surprised at how openly racist the NOAA is. They have an entire section of their website dedicated to documenting the superiority of the white race and a lengthy Youtube video which explains tornados as God’s way of wiping out “the darkies”. Shocking, I know, and I call upon all moral and thinking Americans to forego checking facts, storm the local NOAA office, and demand that I be named Weather Emperor for life. I will need a seven figure salary, decent health benefits, a 401K, and the ability to smite one town per year with a weather catastrophe of my choice. (Olathe, Kansas is about to set the record for most snow-related deaths in the month of September.) 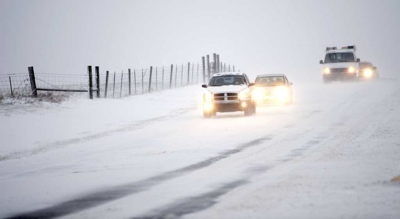 “Jesus, it’s hard enough to get people to come to fucking Olathe, Kansas. Now this?” – Olathe Tourism Board

Hahaha! I’m just kidding, of course. I would never seriously say anything bad about the NOAA for fear that they would send terrible weather my way. And yes, that’s what the NOAA does. They have a giant map of the United States on the wall and every day they render their atmospheric judgement.

NOAA Administrator Kathryn Sullivan:  I went to Memphis once. I had a good time there. Give them some sun today, Paul.

Paul: Sunny and fair with a high of 72 degrees! Will do, boss.

NOAA Administrator Kathryn Sullivan: Nome, Alaska? I used to have a boyfriend who moved to Nome.

Paul: How does 80 below zero sound, boss?

NOAA Administrator Kathryn Sullivan: Sounds like that fat bitch Allison had better put on another layer of blubber.

If there is one thing that Americans learn at an early age, it is that you fuck with NOAA Administrator Kathryn Sullivan at your motherfucking peril. They tried that shit in New Orleans once, and they spent the better part of a month living in the Super Dome, eating urinals cakes just to stay alive.

Incidentally, I really don’t get why they name hurricanes. Is this absolutely necessary?

Bob: Sure you do. You know, the really powerful storm that destroyed half the town that summer?

Kevin: No, that doesn’t ring a bell.

Bob: It destroyed your home and killed all of your loved ones, remember? Hurricane Barbara.

Anyway, whenever Phoenix gets an unusual amount of rain (defined as “any”), everyone totally loses their shit. People are afraid to drive on wet pavement going more than 10 mph, but will try to cross any flooded area even if there are oil tankers drifting by. “Gurrr, I just saw Greg Louganis do a triple gainer into that wash, but I bet I can make it across with my trusty AMC Pacer!” They have a law on the books for this problem, and it is referred to as the Stupid Motorist Law. Really. Rain makes people so stupid in this state that they have to pass a law to try to prevent it, and it doesn’t work. Seeing a mouth-breathing tub of lard waving to news choppers from the top of a submerged El Camino is so common in this state that it ought to be the state flag. 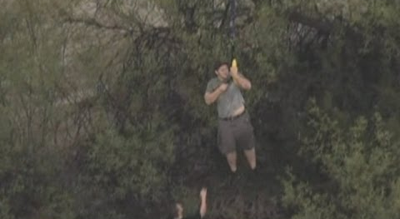 Oh, shit! Wait! We gotta go back! I left my pork rinds in the car!

Actually, we could probably just add that to the flag and it would look pretty snazzy. 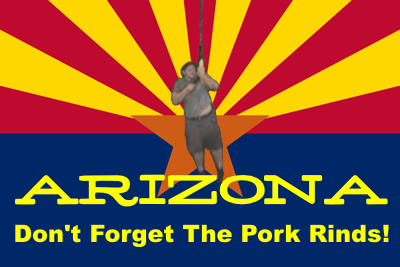 Where was I? Oh, hell, I don’t know. Water fell from the sky, and everyone wigged out. I have a feeling that the worst is yet to come, though. If Kathryn Sullivan reads this, we might have snow in our immediate future.