If there’s one thing that I love more than technology, it is explaining technology to the elderly in the express lane of a grocery store. I can’t even begin to describe to you the joy that brings to my life. I have spent the last 20 years working as a professional in the IT industry, so I really enjoy a doddering, uninformed person with borderline bladder control dismiss all of my knowledge in a single, hilariously stupid sentence that typically begins with the words, “Well, in my day…” Why do I love it so? Because I have an answer at the ready. I simply say, “Well, this is my day, and in my day WE STEAL PEOPLE’S DENTURES!!!” Yoink! And then thirty minutes later, I’m at home, hard at work with the dentures, a file, a tube of superglue, and whatever animal happens by. I tell you something: We have the funniest looking frogs in our neighborhood.

Today’s adventure began as a result of a miscalculation on my part. The cardinal rule of Grocery Store Lane Selection is to select the lane without the senior in it. It doesn’t matter if the only other open lane has a Soviet Union-style bread line circling around the fucking block; If there is a senior in the other lane, it will be much, much slower. This is because I live in Arizona, the Methuselah of states. Our flag has a depiction of a Cadillac sticking out of a convenience store on it. Our state sponsor is Polident. We have a state doily (Collectible Lace), and social programs down here consist of bowls of ribbon candy lying around in poor neighborhoods. A lot of old people is what I’m saying, and every single one of them gets to the cashier and makes like it’s the Matlock Society Story Hour, so you never get in the lane with the senior in it.

Except it was lunch time, and I was distracted, and by the time I realized my gaffe, my food was already on the conveyor belt and it was too late to withdraw. That’s when I realized that the 80-something year old woman in front of me was in Full Blather (a condition with which I am all too familiar) and had just used the words “The Facebook” in conjunction with the words, “grand-daughter”, “gizmos”, and my personal favorite, “a lot of hooey”. Then, noticing a person who had not been around to witness the Crimean War, she turned to me and said, “What about you? I suppose you know about all of this internet business.” 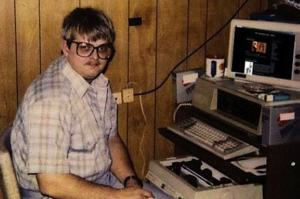 “Well, in my day, people TALKED to each other!” she harumphed, and turned to savor her obvious victory with her friend the cashier, who was looking at me with a haunted look that said, “She bought a can of corn seven hours ago, and we’ve been talking about what is wrong with my generation ever since.”

“Sure you did. You talked to people face to face. Or if they were far away, you’d call them.”

“That’s right!” she said, glad to see that she’d talked a little common sense into me.

“And sometimes you felt like you needed to get everything down in writing, so you sent a letter. Or if you just wanted to say hi, you sent a postcard.”

“Which is pretty much what the internet is doing, just in a different way. Email is like a letter, only a million times faster, and Twitter is like a postcard. It’s all communication, there’s nothing radically different about it.”

This was Not What She Expected, and was met with an unbelieving stare followed by a hand wave and a single word: “Bah!”

I should have left well enough alone, but something about her dismissive tone rankled, and I decided to get a little dig in. “I’m sure people said the same thing about the telegraph.”

This is when my new octogenarian friend uncorked the best sentence I have heard in a long time: “Well ok, then, explain to me The Tweeter!“ 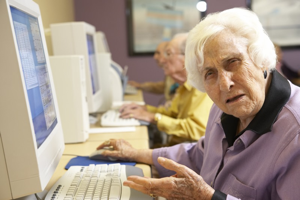 “Explain to me The Tweeter!”

There are not many good places a conversation is going to go once you’ve been asked to Explain The Tweeter. My gut instinct was to reply, “I’d sooner shove a starving rat in my mouth and sew my lips together,” but the cashier interrupted and somehow managed to send my elderly friend on her way, unilluminated in the ways of The Tweeter, and happier as a result.

“Sorry about that,” said the cashier, shaking her head.

Luckily, they know me at this grocery store, so my mini-rant was met with polite, if nervous laughter instead of a frantic call to security. Not that a call to security would have helped much. Security in this store is a guy named Mike, and I’m sure Mike was in the back, playing with The Tweeter the whole time.