“He who makes a beast of himself gets rid of the pain of being a man.” Samuel Johnson said that, and it explains why he was seldom invited to dinner parties. He’d drink all the sherry, shit in the guest bed, and all the pets would wind up with a wicked strain of VD. But he was onto something, of that we can be sure, because people make beasts of themselves on a regular basis. There is no end to things that we will do to ourselves in a vain attempt to distract ourselves from the fact that we are human. Like watch the Love Boat, for instance.

For those of you not old enough to have seen the Love Boat, let me explain it in terms that you might understand. Imagine yourself on a rowboat in the middle of a placid lake on a warm and sunny afternoon. Now imagine that weasels are chewing on your genitalia while you are experiencing a massive coronary and while this is going on a low flying aircraft appears and drops 500 pounds of flaming napalm on you. The Love Boat was infinitely worse than that.

Television is pretty shitty these days, and in a way I can understand that. We’ve got metric assloads of channels from which to choose. If there is only so much quality programming out there, it gets watered down by the veritable ocean of bullshit coming out of places like MTV Studios. For every Breaking Bad, we have to wade through a million hours of Here Comes Honey Boo Boo.

But back when there were only three networks and a bunch of pot smoking hippies running PBS, you would think that the quality would have been much better. After all, with fewer outlets, only the best entertainment would make it to prime time. That was the theory, anyway, but it is not what happened. What happened was that the networks realized that they absolutely owned the home entertainment market and were reduced to a state of coke-addled complacency. 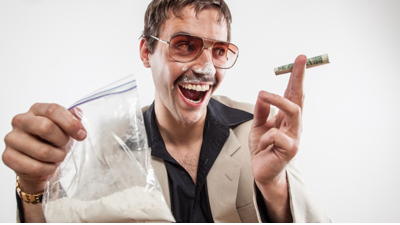 The American public will watch whatever I tell them to watch. Now if you’ll excuse me, Bob Barker and I are going to go pop some amyls and cornhole a couple of Barker’s Beauties behind the Plinko game.

Don’t believe me? Fine, let’s talk about Manimal. Manimal was an hour long drama produced by NBC and late stage syphilitic thinking in which the protagonist possessed the ability to turn himself into any animal he chose, a power he used to assist police in solving crimes. Tell me that idea wasn’t the path of least resistance.

TV Executive #1 – Hey, it says here that we somehow managed to get negative Neilsen ratings for A Jamie Farr Christmas.

TV Executive #1 – Yeah. Maybe we should, you know… Do something.

TV Executive #1 – Cop shows are good. How about a cop show? Only… Only one of the cops can turn into panthers and shit. We’ll call it… Animal Cop. Or Ani-cop. Or… Manimal! Yeah, that has a ring to it!

I love how Manimal uses his powers to solve crimes. It takes some optimism to come up with that idea, doesn’t it? Scientific studies conducted by me just now show that most Americans would play that hand a little differently: 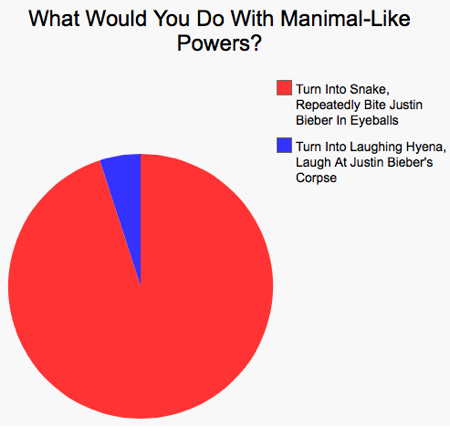 Shows like that took a little bit of effort, however, in that there were characters, and plots, and a whole bunch of things you had to keep track of lest Manimal turn into a toaster in the fifth episode, resulting in an avalanche of indignant complaint letters from consistency nerds. (And by “consistency nerds” I mean the kind of detail-obsessed weirdo who will go on and on about how the Death Star couldn’t have exploded, and that it should have imploded, and will bore you to tears with the technical reasons for this until I just get sick and tired of it and close the basement door, leaving him chained down there forever. What an asshole.)

But when they hit upon the idea of the Love Boat, however, they really struck gold because they didn’t have to worry about keeping track of shit. It was new stories every episode, and even if you did have Florence Henderson on the show every week you didn’t have to sweat it. Just call her Nancy, or Audra, or fucking Harvey for all anyone cared. Because when you look at Florence Henderson, you think “Mrs. Brady”. 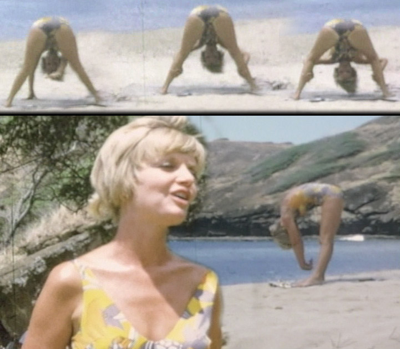 Oh, sure, there was the crew to keep track of, but no one, and I mean no one gave a rat’s ass about anyone in the crew. Doc could, and probably did roam around the ship euthanizing any elderly widows who weren’t receptive to his advances. Isaac? Julie? That fucking bitch, Vicki, who got her job because she was Captain Stubing’s daughter? Ratings would have gone way, way up if they were all dropped off on a deserted island and forced to feed on one another to survive. I’d still be watching that episode on a daily basis, in fact.

And Gopher? Fuck that guy, he doesn’t even return my emails.

No, the Love Boat formula ensured that they spent the absolute minimum possible amount of money on script-development so that ABC executives could then go blow the rest of the budget on tranny whores.

ABC TV Executive: You got the script done?

ABC TV Executive: And you have a story about a woman who has been hurt and doesn’t think she can ever love again?

ABC TV Executive: But she finds love when she least expects it?

ABC TV Executive: And another story about a couple whose marriage is in trouble and they rekindle their love?

ABC TV Executive: And a third story involving some sort of zany antics?

Script Writer: For fuck’s sake, we have been writing the same three fucking stories for six seasons now! YES! WE WROTE THE SAME SCRIPT BUT CHANGED ALL THE NAMES, ONLY THIS WEEK WE GOT CHARO INSTEAD OF FLORENCE HENDERSON!!!

But even the Love Boat can get old, and so eventually they had to do something to perk up ratings. Unfortunately, that idea did not involve taking a Tomahawk cruise missile to the Aloha deck. Instead, it involved show tunes. I give to you, the Love Boat Follies, the worst fucking idea since JFK said, “Hey it’s such a nice day out, what do you say we take the top off of the convertible?”

Man. That was fucking brutal. Gavin MacLeod singing All I Need is the Girl. All I have to say about that is that if you’re going to wear a suit like that, the only kind of girl you’re going to land is the kind that has a large adam’s apple and hangs out with ABC executives, if you catch my drift. Luckily, the video quality was poor, what with it having been recorded on some sort of potato-based camera equipment. If that had been in high-def, we might all very well be dead.

This clip is of slightly better quality, so you may want to stand back from the screen when you view it. 10 miles away should be sufficient.

What’s amazing is the fact that the Love Boat Follies was actually two episodes, which I’m pretty sure is explicitly banned by the Geneva Convention, and if it isn’t, why do we even bother with the fucking thing? You don’t bomb ambulances, and you don’t show Ethel Merman singing show tunes on prime time TV in nineteen-fucking-eighty-three! There is a baseline of civil human behavior expected of all of us, and this clip lures that baseline into an alley and fucking gang rapes it:

This is what ABC executives, in their terminally coked out state, thought was a good fucking idea. In a year when the Police wrote Every Breath You Take, these delusional fuckwads were calling around trying to land Ethel-goddamn-Merman. Way to be with the times, ABC TV Executives. I’m willing to bet a lot of money that their Plan B involved flappers dancing the Charleston on top of a flag pole, or maybe a really hot and trendy barbershop quartet. I would have loved to have been in the room when they screened these episodes.

TV Executive: Well, what did you think?

Greg: You’re proud of this?

Greg: You are all a bunch of monumental assholes.

If they had had access to someone with a modicum of taste during the development process, this show could have been a lot better. Or more likely, Captain Stubing would’ve turned into a hawk and solved a bunch of crimes.