I’ve been thinking a lot about Christmas trees lately, and not just because they’ve been rammed down my fucking throat since Halloween. Seriously, this three months of Christmas bullshit has to stop. I propose that anyone caught putting up Christmas decorations before Thanksgiving be placed in the stocks, and then we turn Rudolph loose on him. Rudolph on Viagra. And as for commercial establishments, every day that they’re in violation then everything in the store is free, including the employees. No one, and I mean no one is going to put up Christmas decorations in October if there’s a chance that they’ll wind up being sodomized in a double-wide for the rest of their life as a result. Ok, maybe Walmart employees. (45% of all Walmart employees enjoy being sodomized. That’s a scientifically proven fact. But don’t take my word for it, the next time you’re in Walmart, ask every employee you see if they enjoy being sodomized. You’ll see. Also, video that shit and send it to me.)

Anyway, I was thinking about Christmas trees because for the first time in a long time, my kids weren’t thrilled to the point of incontinence when I announced plans to put the Christmas tree up. I mean, they were excited, but not batshit crazy excited like they have been about it in the past. You know how little kids, when they get excited they flap their hands in front of themselves like they’re about to fly? My kids did that when they were excited, but when I announced that the Christmas tree was going up, they’d flap so hard that they actually flew. It was like having a pet parakeet. You had to make sure the windows were closed, our out they’d go, and you’d spend the next hour trying to coax them out of the top of a tree with a handful of birdseed.

Now they’re all, “Oh, yay! The Christmas tree! Awesome!” which is a nice enough reaction, but it’s not the insane explosion of joy I’ve come to expect. You know, when kids get so excited that they sprint around emitting a super-high pitched squeal and it’s damn near impossible to tell if they’re happy, or maybe on fire? That. I miss that.

I remember the year that my mom discovered that her three sons had hit Surly Teenager stage, and since we were too cool to do things like decorate Christmas trees or speak in anything other than monosyllabic grunts, she was stuck putting up the tree herself. That’s going to happen to me in a few years, and I’m not too crazy about the idea. Maybe I’ll link Christmas tree appreciation to the value of their presents. Or to the availability of food and water. 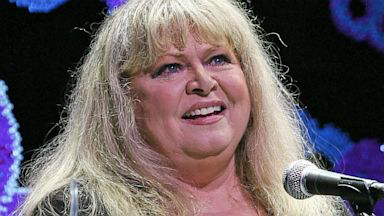 And don’t think Sally Struthers is going to help you out, kids. She eats 95% of the food that gets donated.

My earliest memories of a Christmas tree are of my dad, muttering profanities under his breath as he struggled to get the tree set up “just right”. This is because my parents made the mistake of asking us if we wanted a real tree or an artificial tree for Christmas. What kid is going to refuse a “real” tree? For all kids know, Santa leaves nothing but upper-deckers in the homes of stupid people clueless enough to have a fake tree. So we opted for a real tree.

My dad should have tweaked that question ever so slightly. “Kids, do you want a good looking, symmetrical, lush and full Christmas tree this year? Or do you want an uneven, spindly, brown piece of shit that will catch fire at the drop of a hat, burning you and everything you love into a fine ash?” We would’ve been fine with a fake tree if he’d put it like that.

I do think that my dad needed to shop for Christmas trees somewhere else though. He must have shopped at Crazy Stu’s House of Discount Christmas Tree Rejects. Either that or he had an almost magical ability to select a tree that looked normal enough in the lot, but when he got it home it started acting like a god damn cancer patient, shedding needles everywhere, especially when my dad violently shook the tree when he noticed the 45 degree bend near the top that meant that the tree could never be fully upright, but instead drooped sadly to one side, almost as if someone had filled the base with egg nog and not water. Our tree looked shitfaced.

Finally, he wised up and made a new rule: He’d buy a real tree for Christmas, but my brothers and I had to pick up all the needles by hand. That last part was explained with the dubious claim that the needles somehow destroyed vacuum cleaners, which was clearly bullshit. He just wanted us to appreciate how much of a pain in the ass the entire endeavor was. And he was right. The first year we had to pick up all of the needles by hand was the last year we had a real tree. 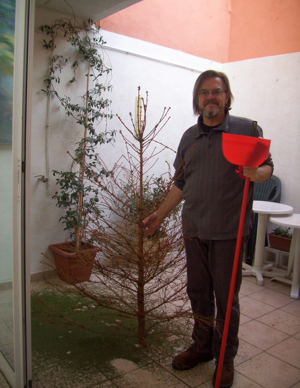 When I was attending college, no one had the money to purchase a Christmas tree, real or fake. Instead, we improvised by maiming local flora, tearing off large branches at random, propping them up in the corner, and covering them with empty beer cans. One year, however, we managed to scrounge something that more closely resembled a Christmas tree, which we felt required something a little classier than beer cans to accent it. So we held a party, and women drank for free as long as they donated a pair of panties to decorate the tree with. That was a fun party.

I went for quite a few years with a very minimal Christmas tree that I put up out of a sense of duty more than anything else. Remember moving out into your own place and buying one of those pathetic two foot tall trees that open like an umbrella? That’s what I had. I didn’t really care about it, just felt that I needed to do it. The advantage to that tree was that it was very easy to put away when the yuletide season was over: I’d pick the fucking thing up and wing it into a closet.

Owning dogs gave me a new appreciation for exactly how exciting it can be to have a tree inside the house. I expected that the dogs would take a piss on it, but what they wound up doing was SO much more entertaining. My girlfriend and I put the tree up, strung it with lights, and hung ornaments on it. (I learned that women start collecting ornaments when they’re young. Guys don’t own ornaments, and if they do, they’re liable to do stupid shit with them, like convert them into pipes to smoke pot with.)

We admired our handiwork and then left the room. Within seconds, we heard this incredible commotion, and running back into the room we saw the tree spinning violently in circles, the ornaments hanging on for dear life until they finally reached escape velocity and flew across the room. The dogs had discovered that the lower branches were just low enough to serve as excellent ass-scratchers and were taking full advantage of the situation, running in frantic circles beneath the tree.

So the magic is fading, for now anyway. I suppose that at some point in time, maybe when I’m 94 and crazy with dementia and whiskey, I’ll see a Christmas tree and, mistaking it for my third grade teacher or something, get incredibly excited. But until then, I’ll just have to accept that Christmas trees aren’t as exciting as they have been in the past.

That is, unless you help me out with this petition. 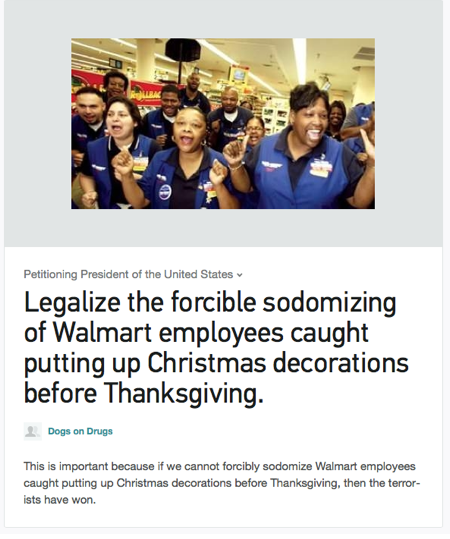 Just in case change.org pulls the plug on this petition, which they almost certainly will, here it is. Fight the power, people! Or whatever it is that inspiring leaders say in this situation.