You know what show is a goddamn hoot? My Strange Addiction. The concept is simple: They select people with strange addictions and televise a few days of their lives so you can sit there on the couch, laughing at other people’s deep seated psychological issues. Hey, everyone loves a good train wreck, and if the passengers just happen to be drinking shoe polish at the time of the crash, so much the better.

Now I hardly ever watch regular television, so I catch episodes through the cesspool of humanity that is the internet, more specifically, Youtube, which has suddenly decided to recommend episodes of My Strange Addiction because once I did a Youtube search on gasoline and My Strange Addiction happens to have an episode that’s centered around a young woman who drinks gas.

Yeah, no shit, she drinks gas. I really had no interest in watching the show, but when I read the description I mentally pictured someone pulling up to a service station and taking a few belts of high octane right from the pump, and frankly if people are gonna start acting that goddamn crazy, I want to see it. 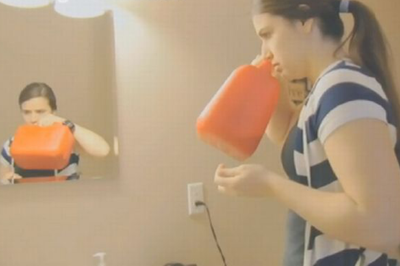 On the plus side, she doesn’t knock or ping any more!

Turns out that wasn’t too far from the truth. She actually keeps a small jerrycan of gas in her apartment from which she swigs to, I dunno, get her Exxon on or something. It wasn’t as interesting as I’d hoped, to tell you the truth. I thought that she’d be stumbling around, acting like an unleaded version of Hunter S. Thompson or something, when in reality she just kinda sipped gas while all of her family and friends informed her that she had the brains of a doorstop and begged her to go get help.

The visit to the doctor was kinda funny, though.

Doctor: Did I read this chart right? You drink gas?!?

But more interesting to me was the accompanying story about a young woman addicted to smelling a plastic doll head, not because it’s so novel (it strikes me as garden variety OCD), but because the end of her story made me laugh so hard that I damn near passed out.

At the end of every episode of My Strange Addiction, the tell you how the poor bastards are doing since filming was complete. They do this to give you a sense of closure because otherwise, how are you going to live the rest of your life if you don’t know what happened to the dude who fucks his car? 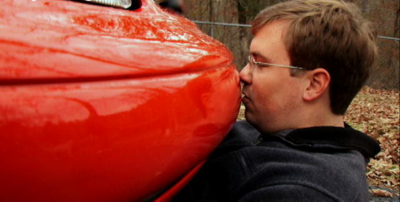 No shit, guy fucks his car.

So at the end of an episode, you’ll see some chick in the world’s strangest intervention (“Dear Kimmy, You are my sister, and I love you, but if you don’t stop eating toilet paper I am afraid that you will die. Also, we’re out of toilet paper again, and I had to wipe my ass with the good towels.”) and then they’ll give you a little update by putting some words up on the screen, usually a variation of “Kimmy is now in therapy for her addiction”, or failing that, “Kimmy’s family bought new towels.”

But the chick who smells her doll head all day and night had an update so fucking weird and wonderful that I’m going to have to give serious consideration to having it put on my tombstone when I shuffle off this mortal coil: 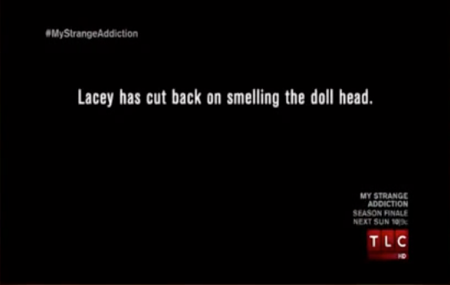 Yes, Lacey has cut back on smelling the doll head. That is, without a doubt, the most random thing I’ve read in ages. I understand that on a show like My Strange Addiction, you’re bound to hear some weird sentences from time to time (e.g. “Geoffrey is no longer fond of jamming model trains in his dickhole”), but I don’t think I could come up with a stranger sentence if I had a thousand pounds of refrigerator poetry magnets and a gallon of PCP. That sentence is stunning in it’s absurdity, which is why I should be selling it on a t-shirt: 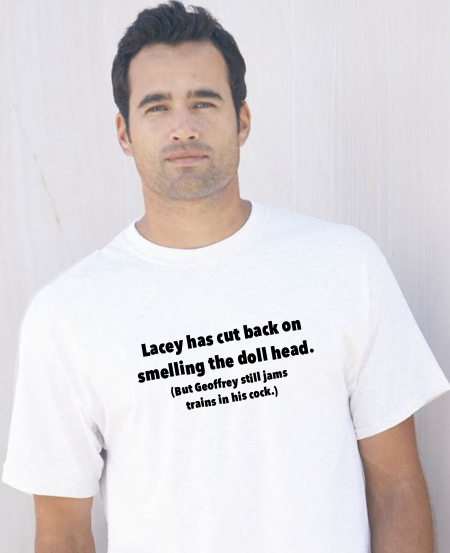 If you’ve been wondering where I’ve been the last couple of weeks, shit has been extremely crazy at work, and I’m essentially working two full time jobs. For the same, single paycheck which is what is known as “being a team player”, and also “looking for a different job”. So it hasn’t been leaving me a lot of time to write.

But as you can clearly see above, the extra hours have done little to diminish the feverish rantings in my brain. So stay tuned! Because you never know what tomorrow might bring! (e.g. “Greg has promised to stop throwing speculums at the homeless.”)