I was sitting in a long and boring meeting this afternoon, the kind of meeting in which people compulsively pull out their phones to look at the time even though this only makes it worse. A watched pot never boils, and neither does a cell phone. Still, the cell phone does serve as a fun distraction. You can say, “Hmmm, let me look that up real quick,” and then play Stick Hero for ten minutes, and no one cares, probably because they’re playing Stick Hero too. Why we don’t all just stay home and play Stick hero and save everyone the bother of driving to work is beyond me.

Towards the end of the meeting the guy next to me got a phone call, and as his phone was sitting next to mine on the table, I got a look at it before he sent it to voice mail. Swear to God, the call was listed as coming from “Bipolar Cher”.

And that instantly made me think of this Tweet, which came to me via the attention of a friend who retweeted it, one assumes because she had a powerful handgun pressed to her temple. 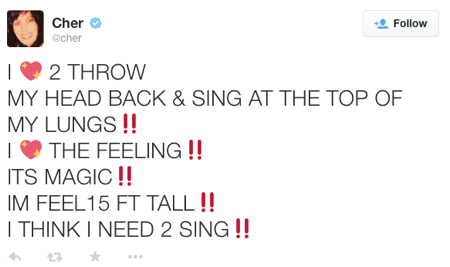 That certainly seems like Bipolar Cher posted it, doesn’t it? Or maybe her 12 year old great-great-great granddaughter, who has just learned how to use emojis.