A few years ago, I contributed a post to another web site which I can no longer find, probably because my foul ramblings rendered the entire site unfit for human consumption. It happens. Anyway, in the intro to my post, the editor referred to me as “mysterious”, I guess because I maintain a certain level of anonymity in my online dealings. This, as it turns out, pisses people off. They’d greatly prefer that I provide the public with detailed and specific directions to my house so that when I print something they don’t like, such as “Oprah Winfrey uses live geese for tampons”, they can come over to my house and Do Something About It.

You laugh, but this is a real concern. About 15 years ago, I offended someone online by insinuating that pro wrestling was fake, and when our back and forth resulted in me commenting on his predilection for watching oiled up men in tights grab each other between the legs, he then suggested that maybe I’d have a different opinion of wrestling when he showed up at my house with a goddamn assault rifle. This, in turn, resulted in the Department of Defense and the Maine Department of Corrections getting involved (seriously), which is pretty fucking hilarious until it dawns upon me that one day I will likely find myself living in my own personal Cape Fear, only I don’t own a houseboat, so it’s likely that I will meet my demise in a drainage ditch with some mouth-breathing derelict standing over me saying, “That’ll learn ya’!”

Just between you and me, I seriously doubt that I will have learned anything at all.

But there’s another reason that I value my online anonymity: Chances are that you know who I am, and my experience has been that people treat me differently when they know who I am. People become very interested in talking to me, start acting in an obsequious manner, and things devolve from there until I wind up having to mace everybody, and they get really pissy when you do that at the DMV.

That having been said, I’ve come to have a certain level of comfort on this web site, and I think that if I’m going to force you to slog through ridiculous stories from my life (see: Maniacal Wrestling Anecdote #7, above), the least I can do is let you know a little more about who I am.

Goddammit, I will never live down that fucking show. I have been in 26 movies and 35 TV shows, and does anyone ask me about what it was like starring in TekWar? Fuck no, and they totally should because that show was fucking crazier than shit. TekWar was written by William Shatner, and I thought it would be kind of cool to meet him, but one day he showed up on the set dressed as Captain Kirk and refused to talk to anyone. He just stood there for hours on end, occasionally sighing and speaking loudly into his cell phone, “No signs of intelligent life here, Scotty.”

Finally, we learned to ignore him, which I guess angered him because he stormed off and returned with a glazed ham with a wig stapled to the top of it. And when we would roll film, he would stand just off camera and make out with the fucking ham. It was goddamn revolting. Then after a week of this, a couple of dudes we’d never seen before showed up, shot him in the neck with a tranquilizer gun and dragged him away. The next time I saw him, he was the Priceline Negotiator. What the fuck?

But no one cares. They just want to know about B.J. and the Bear. Ok, you want to know about it? Here’s the deal. I approached NBC with an idea for a serious hour long drama centered around renowned Nazi hunter Simon Weisenthal. The idea was that every week we would give the audience a glimpse into what it was like to devote one’s life to bringing mass murderers to justice. And we didn’t want it to be all car chases and dramatic confrontations: We wanted it to be real, and authentic, and show the world how one man’s hope in the face of horror could not only carry him through, but inspire others as well.

Well, NBC executives were absolutely blown away by my pitch, and they signed on for 48 episodes right there on the spot. Then, a week later, I was called into a conference with the Executive Producers, who informed me that their market research indicated a subtle anti-Semetic bent in the television viewing public, and that, along with a misconception that Hollywood was run by Jews was going to cause some problems.

“Luckily, though, we think we can fix this with a couple of minor tweaks to the show. You’re no longer playing Simon Weisenthal, Holocaust survivor and Nazi hunter, you’re playing a long-haul trucker named B.J. and you drive across the South with a monkey, I dunno, solving crimes and shit.” Then they tied me down to the conference room table and snorted cocaine off of my abs for six straight hours. It was humiliating! 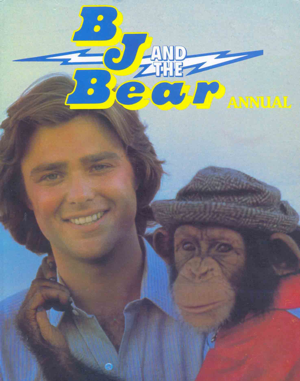 And trust me, I know all about humiliating.

Of course, you’ll want to know about Bear. Bear was a fourteen year old male chimpanzee and a complete and total motherfucker. I hated that goddamn fucking monkey with every fiber of my being. Sure, he looked cute, but it took fucking forever to film a single scene with him. It’d be like, “Action!” and the feces would fucking fly. Twenty minutes later, after the craft service people had dramatically quit and we had hired some homeless people to clean up all the monkey shit for a case of scotch, we’d try the scene again and fucking Bear would be pissing in his own mouth. Scene after scene after scene like that. (It was a lot like working with Dom DeLuise, actually.)

Finally, one of the producers came up with the idea of giving Bear some heroin, you know, just to calm him down a little. And that worked for a while, but then, inevitably, we discovered that working with a junk-sick chimpanzee was way, way, WAY worse than what we’d had to deal with before. One time one of the kids from Eight is Enough was guest starring, and Bear just stone cold fucking killed the kid. Ripped his face off and flung it into the rafters. NBC executives dragged the kid offstage and buried him in an alley, then told us all to keep our mouths shut when the kid’s parents showed up. That kid’s face was on milk cartons for a year and a half. Fucking Bear.

We tried to script around the problems with Bear, but what could you do? He was in the fucking title of the show for chrissakes, and we learned early on that if you tried to sneak a stunt-monkey past the audience, some asshole would figure it out and flood NBC with complaints. Seriously, there was a guy out there who had nothing better to do than watch B.J. and the Bear and make sure that nobody switched monkeys on him, because yeah, that makes goddamn sense. People are fucking crazy. 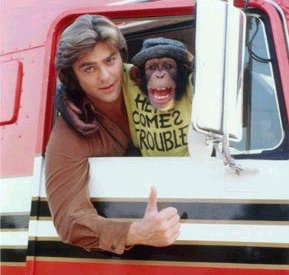 And trust me, I know all about crazy.

But enough about B.J. and the Bear. I was on a lot of other shows too. Like Matlock. And Melrose Place. Hey, speaking of which, you probably remember Heather Locklear. I bet you didn’t know that she has this thing about spaghetti: She carries a purse full of spaghetti with her wherever she goes, and when she gets hungry, she just reaches down into her bag and grabs a handful and jams it into her face. Sauce and everything. The first time I saw it, I thought I was having a stroke or something, because that kind of behavior is not fucking normal.

And Hollywood is full of people like that. Everyone is just goddamn insane. The most normal show I was on was called Bicoastal, and it starred Gary Burghoff (you know, Radar from M*A*S*H) as the CEO of a PR firm with clients in LA and New York. The scripts weren’t always the best, but everyone really tried to make Bicoastal take off. But every time I asked Gary about what network we were on, he got really evasive. He’d say that he had a deal promising him complete creative control, and that we were going to put a couple of seasons in the can before we gave anything to the studio. It sounded a little weird, but after you’ve seen Florence Henderson unhinge her jaw and eat a guinea pig whole, you kind of stop questioning things and just learn to roll with it.

As it turned out, there was no show. Gary Burghoff had just hired a bunch of people to make this show because he was lonely. I was goddamned depressed as fuck for months after that. I even considered working in Branson, Missouri to give you an idea of how bad it got. Damn. I mean…. Just…. Damn.

Anyway, I’m still in the business. I was in an episode of CSI just recently (Ted Danson: Flies into a rage when he meets someone else named Ted. Really. It’s a problem.) I play a little music, too. I don’t know what else to say. You want to know something more about me, leave a question in the comments below.