Anyway, I’m not a fan of traditional tourism destinations because they tend to attract tourists, and we all know how annoying they can be. “What do you mean my family and I can’t throw a birthday party here? Why not? Yes, I know this is Auschwitz, why do you think we came here? I want to talk to your manager!”

The other thing I don’t like about touristy places is that they tend to be full of ridiculous touristy crap. For instance, if you’ve ever heard of Tombstone, Arizona, it probably calls to mind an image of a dusty, rundown Western pioneer town. Well, I’ve been to Tombstone, and it is nothing like that. It is wall to wall “authentic” saloons, which normally I would approve of (especially if they have a ditch full of Shriners out back), but each “authentic” saloon is owned and operated by some mega-conglomerate and sells watered down “rot-gut” behind pre-weathered swinging faux wooden saloon doors while a fucking clown entertains the kids with balloon animals. It’s hokey, and fake, and stupid, and designed to part you from your hard earned dollars. I totally understand why Val Kilmer shot the shit out of this town.

That’s not to say that tourist destinations are all bad. You can learn a lot, actually, if you just pay attention. For instance, once I went to a “real Hawaiian luau”. Did you know that Hawaiian islanders invented drink coupons and port-a-potties? They also invented charging $28 for poi, which seems a little expensive until you realize that you can also use it to grout tile in your bathroom,

(A digression: The word “luau” always reminds me of the word “queue” in that they’ve both got a fun bunch of vowels in a row that I always feel bad about ending. I want to keep that shit up: “Charles is waiting in the queueueue for the luauauauauauauau.” Also, “luau” would be a great word to be in the middle of saying as you realized that an axe murder was in your house.) 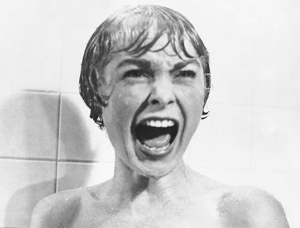 I prefer strange vacation destinations. The kind of place that if you tell people you’re going there on vacation, they respond with an incredulous, “Why?”

Me: Remember, I’m not going to be in next week. I’m going on vacation.

Hahaha, I like to have fun with Olathe, Kansas, which you would know if you read a post I once wrote entitled Olathe, Kansas: Come for the Rednecks, Stay for the Herpes, in which I threatened to slander the living fuck out of Olathe, Kansas, unless they paid me a large “consultant’s fee”. They didn’t, and so I’m free to continue to say terrible things about Olathe, Kansas such as the following:

Olathe, Kansas is home to the world’s only professional Baby-Punting league.

And no, in case you were wondering, I’m not really planning on going to Olathe, Kansas, skanks or no. I’m not stupid: I know that there are probably posters up in Olathe calling for my immediate arrest, and if they were ever to learn how to read over there it would make vacationing in Olathe (The Murder Capital of the World) risky. Riskier.

So when I’m asked where I’d like to go on vacation, I usually just blurt out some crazy place that no one would ever want to go to, which is how it came about that I told my coworkers this afternoon that I’d like to vacation in Papua New Guinea.

There wasn’t a whole lot of thought that went into that statement, as evidenced by the fact that these are the only things that I know about Papua New Guinea:

Only one of those things is true. Papua New Guinea occupies half of the island, and so it actually looks like a dinosaur’s ass. 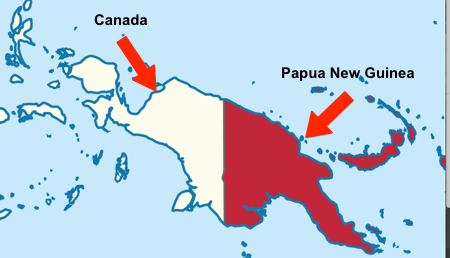 As for eating people, yeah, that’s totally something they do over there. Unless maybe they don’t. From Wikipedia:

[…] recent reports suggest that certain clans have been coaxed into encouraging tourism by perpetuating the myth that [cannibalism] is still an active practice.

Which tells you everything you need to know about the nonexistent tourism industry in Papua New Guinea.

Papua New Guinea Minister of Tourism: I am proud to announce today our new tourism slogan, which I have spent the entire federal budget to place in a full page ad in the New York Times: “Come to Papua New Guinea: We eat people!”

Papua New Guinea Reporter: Wait a minute, no one is going to come here if they think we’re going to eat them!

Papua New Guinea Minister of Tourism: Oh, shit, you’re right! Well, let us hope that Americans do not have as high a literacy rate as we do here in Papua New Guinea.

(For those of you keeping score at home, the list of places I cannot travel to for fear of my life is now: Olathe, Kansas, Tombstone, Arizona, and Papua New Guinea.)

There’s a fun little Wikipedia page on Tourism in Papua New Guinea which is about 14 words long and contains this gem:

I bet that results in some pretty interesting travel posters. 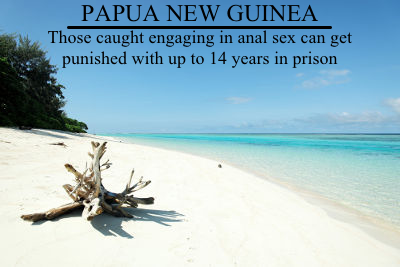 Since I was at work when I learned about Papua New Guinea’s LGBT Travel Warning and therefore had nothing better to do, I decided to call the Papua New Guinea embassy and ask them about it. Did you know that Papua New Guinea has an embassy? I didn’t. But now I do, and let’s just say that if one day I find myself looking for political asylum while covered in steak sauce I know where I’m not going.

Anyway, they have a phone number and I just so happen to have a phone, so that worked out nicely. I gave them a call, totally expecting to be connected with someone whose name I wouldn’t be able to pronounce without a slide whistle and a grand mal seizure, but instead I was connected to a nice lady named “Julie”. (I changed her name, lest she get in trouble for talking to me and wind up as an hors-d’oeurve. But it was a very plain, American name, which was like, “Bitch, get with the program!” but whatever.)

Julie: Hi, this is Julie. How may I help you today?

Me: Hi Julie, I’m thinking of visiting Papua New Guinea this year and wanted to ask you a couple of questions.

Julie: Fantastic! What can I help you with?

Julie: Yes, in Papua New Guinea, the culture is less tolerant of homosexuality than is the case in other countries such as the United States.

Me: Ok, but let’s say that me and my special lady-friend wanted to go there and she decided that she’d be into butt-stuff. Are we gonna get thrown in the clink or what?

Julie: (long pause) While there are laws that pertain to certain homosexual practices, they only apply to acts performed by homosexuals.

Me: (pretending to yell over my shoulder) Hey, honey! Good news! They’re into it!

Unfortunately, Julie hung up before I could ask her some tasteless questions about cannibalism, so I guess we’ll never know if she’s ever eaten Ground Chuck. 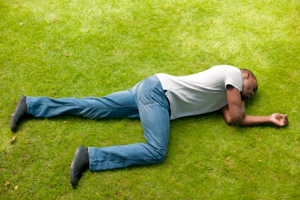 I probably learned more about Papua New Guinea at work today than if I had actually gone there. For instance, they claim to have over 800 different languages, which if you ask me is fucking ridiculous. I mean, I understand that they can’t exactly get together and decide on one language, seeing as how no one can understand anyone else, but you gotta get on top of that shit, pronto, guys, because you can’t expect tourists to carry around an English to Papua New Guinea dictionary the size of a set of encyclopedias. Pick one language and fucking stick with it.

I also learned that “foreign females are usually advised not to travel unescorted in Port Moresby”, which makes me wonder how and why they decide to make an exception to that rule.

Papua New Guinea Hotel Front Desk Clerk: Sir, Céline Dion is in the Presidential Suite and she’s being extraordinarily difficult. She just called down here and demanded that we provide her room with gluten-free oxygen.

Papua New Guinea Hotel President: Tell that no-talent bitch they’ve got gluten-free air in Port Moresby and then give her a fucking map.

Now I know it’s easy to make fun of other cultures, (Seriously, it’s really, really easy. Here, repeat after me: “Kuala Lumpur? Hahahaha, what a bunch of asshats!” See how easy that was?) but we have to remember that there are parts of the world that aren’t as civilized as we are and can’t even watch porn while attending a baptism. And that’s ok. I’ve had a lot of fun here at Papua New Guinea’s expense, but it is important to remember that we all share this planet together, and that everything else aside, we are all of us brothers. Sweet, succulent, mouth-watering brothers. 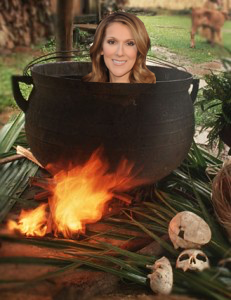 (I just now realized that if Weird Al made a parody of Madonna’s song Papa Don’t Preach entitled Papua Don’t Preach, it would have to contain the lyric, “But I’ve made up my mind, I’m eating my baby”.)