A Friend In Need

When I was a freshman in college and living in a dorm, I frequently butted heads with a guy named Chuck. Chuck was what we referred to as a night clerk, which meant that he was a student but also worked for the University and helped to keep the dorm running. Usually this meant that he worked behind the front desk after hours, when the real, salaried employees had gone home. And one of the tasks that a Night Clerk was responsible for was doing rounds, which meant walking around the dorm and making sure that nobody was doing anything Against the Rules, such as flagrantly smoking bongs and loudly jamming Pink Floyd at three o’clock in the morning. Why he had a problem with me, I’ll never know.

Now if Chuck had just done his job and called us out on the various and sundry flagrant violations of dorm policy, law, and general decency that we engaged in on a regular basis, we would not have held it against him. There were other night clerks that we got along with, even when they were forced to bust us. But Chuck was a fucking rule Nazi, and took special pleasure in writing people up for minor and ridiculous offenses.

For instance, one time we got into a beef over me smoking cigarettes in my own room. This was back when I was 18 and still immortal, and cigarettes posed absolutely no danger to me or anyone else. And society still kind of backed me up on that. You could smoke in bars, in the mall, in any restaraunt, and the local E/R even had a special section of the waiting room for smokers which, now that I think of it, might have just been a case of them drumming up future business. When I was 16, I worked at a grocery store with a rare no smoking policy, and I can’t tell you how many times I had to tell someone that they couldn’t smoke in the store, and every single time the person stared at me as if I was crazy. Smoking was still socially acceptable.

So Chuck’s problem with me smoking wasn’t based on public policy, nor was it based on a genuine health concern because at the time nobody gave a flying fuck about second hand smoke. It was based on the fact that my room was apparently not designated as a smoking room.

“You can’t smoke in your room because it’s not a smoking room.”

“So? Who cares? I don’t care. My roommate doesn’t care. What difference does it make if I smoke in here or move ten feet down the hall and smoke in the next room over?”

‘You are Breaking A Rule,” he said. And this was clearly the thing that was bugging him. Not that the cigarette smoke was bothering him, not that anyone had complained, but because there was a little known and often violated rule that I was not obeying. And I assume that there was a fair amount of ego-stoking that was going on behind his beady little eyes as well, because he quite clearly got off on telling people what they couldn’t do.

Chuck would have written up Katharine Hepburn in a second for her lousy attitude.

What was strange was the fact that I had openly violated some pretty serious rules right in front of him with no repercussions whatsoever, but those violations tended to involve drug use which may explain why I got away with them: He just didn’t understand what was going on.

For instance, one time I brazenly walked down the hall with a three foot bong and filled it up at the floor water fountain. Chuck came out of his room and I greeted him with a casual, “What do you say there, Chuck?” He just looked at me kind of funny and walked away. He probably had no idea what a bong was for, let alone what one looked like, and I bet it confused him greatly.

So on top of the nitpicky nature of his complaint about smoking in the one place where I wasn’t supposed to smoke, and the fact that the rule made absolutely no sense, it was so trivial compared to the rest of my behavioral outrages that it really pissed me off.

So that night, a friend and I went out and bought the biggest, foulest, nastiest cigars that $1.92 could buy. I mean, these things smelled like fucking feet. Just horrible. And we set up in the room across the hall from him which, luckily, was a designated smoking room. We propped the door open and puffed away.

About five minutes later, Chuck came out of his room wrinkling his nose and looking really pissed off. “Hi Chuck!” I called out. “Hey, thanks for letting me know that I can’t smoke in my room. I wouldn’t want to break any rules, you know. Luckily, this is a smoking room, so from now on, I’ll just smoke in here!”

He then informed me that he had looked it up later, and he was mistaken, and I was free to go back to smoking in my room all the way down the hall from him. What a coincidence. 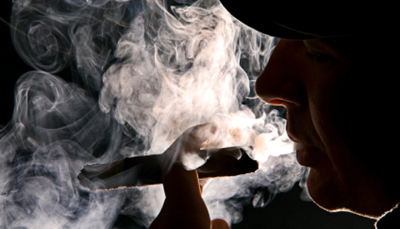 Hey, Chuck! I bet your room is a smoking room. Can I come in?

Chuck was a fucking weasel, a narc, and it didn’t take too long before the partiers on the floor stopped listening to anything he said, which drove him crazy. If he asked someone to turn down their music, they’d shout “Fuck you, Chuck!” and slam the door in his face. But when he asked another night clerk to make the same request, the reaction would be very different. “Oh, of course!! I’m sorry, I didn’t realize the music was too loud. Thank you for letting me know, and you have a nice night, ok?”

I even started blaming things on Chuck, which my friends found hilarious. One time, we had mildly defaced a flyer which a band geek had put up on our floor. It had read, “John Philip Sousa would want you to see this concert”, and we merely added the word “stoned” to the end of it. This, according to the band geek, was a crime on par with the JFK assassination, and he loudly demanded to know who had done it.

“It was Chuck, ” I said. “He came staggering out of his room last night making a huge commotion. I was trying to study, so I came out of my room and I saw him. He had a rubber tube tied around his bicep and a needle hanging out of his arm. I saw him scrawl on your poster, then he masturbated in the corner and then threw himself down the stairs. It was a sorry spectacle, I tell you. Is there no end to the depravity in this foul world? What of us, the honest, hard-working people? Must we suffer these constant indignities? Who will protect us from the Chucks of the world?”

What can I say? When you find yourself in a small dorm room with a large bag of weed, you make your own fun. 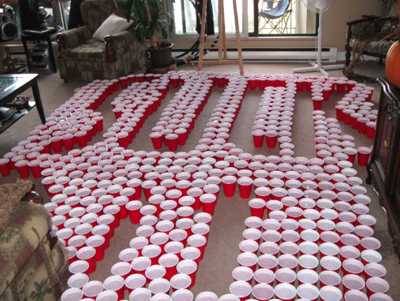 Pictured: Making your own fun.

All right, let’s get to the point, shall we? One day I overheard Chuck talking to another night clerk about a dorm-sanctioned event that he was excited about. It was a lip synching contest, and he had this wonderful idea: He was going to lip synch Michael Jackson’s “Bad”, and I think that what appealed to him was the thought that he was some sort of badass authority figure or something, and right there, on the spot, I decided that I would be as far away from that lip synch contest as was humanly possible.

Because my love of awkward cable access shows notwithstanding, there are some things so fucking bad that I want nothing to do with them. And this was one of those things. I would have thought that watching Chuck crash and burn in public would bring me a lot of pleasure, but the instant I heard of his plan I knew that I would not be able to sit through it. Worse, I probably would have felt obligated to pull him aside and talk him out of it for his own good, advice that he would spurn, which would make his performance and ultimate failure that much more humiliating.

I heard later on that his performance went exactly as I had predicted, and that he left the stage to the deafening roar of silence, gamely trying to pass his attempt off as an impromptu lark, but failing miserably and he sat down at a table by himself, blushing furiously.

What Chuck needed was a good friend, someone who would tell him the truth ahead of time, no matter how painful that might have been because it would save him an even more painful humiliation. But Chuck didn’t have any friends because he was an asshole.

Which brings me to the point of all of this. I ran across this video the other day, and it instantly reminded me of Chuck. Corey Feldman, like Chuck, didn’t have any good friends to pull him aside and say, “Dude, that is a terrible fucking idea.”