Ok, let’s make this quick. I know it’s been a long week, and everyone wants to get home so they can drown everything out with a veritable ocean of booze, so without further ado, here’s the deal…*

Why is this site called Dogs on Drugs? Have you tried finding a catchy and meaningful domain name lately? It’s damn near impossible, and I’ll tell you why. Domain hogs. These are the pricks that purchase every available domain that contains a word in the dictionary in the hope that the demand for that name will become so great that people will shower them with money in order to get it. Pick a word from the dictionary, then go over to a site like GoDaddy.com and see if the .com domain of that word is available. It’s not, is it? I just checked out boron.com and spleen.com and they’ve been snapped up by assholes who don’t need them so you won’t be able to market that idea you had for spleens, or that way of saving the universe with boron without cutting them in on the deal. Fuckers.

Another way domain hogs fuck you over is by waiting until domain names expire then snapping them up by the boatload. When I went to grab a domain to start this site, I tried no less than four domains that I used to own. All of them are taken, none are being used, and these assholes want no less than $1,500 from me in order to get them back. So I got dogsondrugs.com for $12 and spent the rest of the money mailing these fucknuts bags of fecal matter. 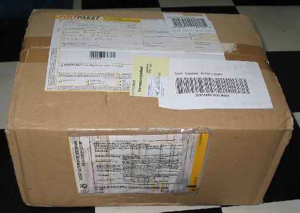 And I sent that shit 3rd class too. Let it age.

So you’re really not advocating giving drugs to dogs, then? No, of course not. Because sometimes that winds up blowing your mind. When I was in college, I was at a friend’s house and we were doing typical college things like smoking 6 foot bongs and laughing at things so hard that we forgot what we were laughing about, and then laughing about that for hours. This friend had a dog named Mario who was in the same room with us for so long that his eyes were as bloodshot as ours. And as I was checking out the dog’s eyes, we got into a kind of staring contest that went on long enough for us to have a… Well, I guess I’d describe it as a moment. We were operating on the same plane, although most objective people would point out that I was probably operating on a plane far below that of a dog. But for a fleeting instant we both… knew. And the dog flipped out, ran across the room and hid in a corner. I smoked one last bong and went home, really weirded out. So, no, I don’t advise giving dope to dogs unless they’re not the introspective sort.

What about cats? No don’t give drugs to cats either.

No, do you have any stories about drugged cats? Oh, yeah, sure. Again, I was in college, and I watched a group of guys mix a gram of mushrooms into a can of tuna and feed it to my friend’s cat Marley. (Of course the cat was named Marley.) About 45 minutes later, that cat came flying out of the kitchen looking exactly like the Tasmanian Devil. And he didn’t come back to my friend’s house for 3 days. So, yeah, bad idea.

Like that, only with drunk and high people diving for cover.

So what about you? I’m a divorced father of three who feels the need to add more objectionable language to the giant cesspool that is the internet because with kids in the house, I don’t really get that chance a lot. Fuck. Shit. Balls. Also, my kids have heard all my stories, so I need a new set of people to traumatize. “Hey, kids, did I ever tell you about the time I was in college and my friend with this cat…” “Yes, dad! His name was Marley, and some guys made him trip off of mushrooms, and he looked like the Tasmanian Devil. Can you just let us go back to watching Blue’s Clues?”

Anything else I should know? Let’s see, I dropped about 12 curse words, admitted committing a federal offense by sending shit via the USPS (oops, 13 swear words), and and shared stories of no less than 3 species getting wasted on drugs. I’d say my work here is done.

*This sentence, incidentally, would be the absolute best and most accurate way to kick off an end of week recap meeting at the office. If you have the ability and balls to do so, please let me know about it.