I love this video because it demonstrates a core, basic rule about guys: Guys are pyros. I’ve tried to explain to my wife how our sons, five and three, will grow up fanning the flames of a smoldering mattress, detonating a bottle full of lighter fluid with a roman candle, or (as I once did when I was fifteen) pouring three liters of gas down a sewer and blowing a manhole cover through an inch of cement, 40 feet into the air. (No shit. It shook dishes off of the shelves of the nearest house. Its awesomeness was in direct proportion to the speed with which I fled the area.) My wife says, “Well, we’ll have to keep an eye on them.” Wrong. It’s going to happen. What’s scary is I may be there with them, since I don’t believe I’ve fully outgrown my fascination with fire, as anyone who has asked me to light the grill can attest.

What I’m really afraid of is the fact that down here, where temperatures routinely reach 116 and you can easily go 90 days without rain, the consequences of a young firebug’s actions can be disastrous. Well, the consequences can be disastrous anywhere, but in Arizona it can happen so fast that you don’t have time to react once something has gone horribly awry. Luckily, for me, I grew up in the Midwest, and so my friends and I were (barely) able to prevent the entire state of Michigan from burning down.

In the late 80’s, some friends and I went on a long weekend vacation to a cabin on the shore of Lake Michigan in a lovely town called South Haven. We began smoking pot and drinking beer about fifteen minutes after we left, and by the time we got out of the car four hours later, we discovered that we were too drunk to walk. Intelligence wasn’t going to play a large part in the events of the weekend.

One of the first things we discovered when we arrived was that the drought that had affected the region was especially pronounced in Michigan. So much so, in fact, that open fires and even smoking were prohibited outdoors. You could not even stand in your own front yard and have a cigarette. So of course we decided that what we needed to do was grab the extremely large bag of fireworks we had purchased, take it to a remote wooded area, and set them off. So we set out for a state park nearby with a very large, wooded hill. 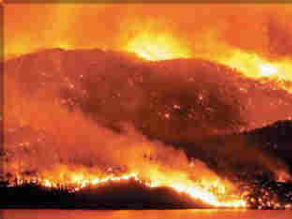 Picture this, only with four drunken assholes.

Fueled by beer and the resulting low IQ scores, we quickly climbed the hill to the summit with the aid of some large wooden stairs that had been constructed by the park along with a string of lights to show visitors the way. When we got to the top, we immediately pulled out a Jumping Jack, which is a small firecracker-like explosive that shoots flames and spins around in circles before detonating. You know how in Smokey the Bear videos, they show you someone dropping, say, a cigarette in the general vicinity of a shrub, and that shrub becomes engulfed in flames within seconds? Yeah, I always laughed at that. Not after this weekend.

Because the first Jumping Jack did what I’d never seen a Jumping Jack do before: It shot twenty feet into the air, twenty feet sideways, and landed in a pile of waist-high weeds. Worse yet, the weeds were on the other side of a fence topped with razor wire that contained the generator shed for the lights on the stairs. And, as anyone familiar with Murphy’s Law will already have guessed, the weeds burst into flame before the explosive had even hit the ground.

There we were, four drunk, stoned guys with a large bag of fireworks, in the middle of a massive tinderbox, and we’ve just set the only area we can’t directly access for hundreds and hundreds of miles around on fire. We were fucked with a capital F. That is until the only one of us with a functioning brain cell left noticed that the ground beneath the locked fence gate was sandy. Yes! He quickly dug a trench underneath the gate just large enough to squeeze through, and somehow managed to put the fire out, which by the time he got in there filled pretty much the entire enclosure. Amazingly, he emerged unburnt, although his shirt (which he used to beat at the flames) showed some visible burn marks.

Deciding that we had tempted fate enough, we began the trek down the stairs, realizing half-way that we’d left behind all of the fireworks (including a MASSIVE Roman candle we were going to set off up there). While we debated the merits of going back up to retrieve the fireworks, we heard shouting from below. “This is the police! Anyone up there? We’re going to ticket and tow your car if you don’t come down right now!” The park had closed while we were up there, and the police were waiting for us down below. If we had fled the scene before putting out the fire, there is no possible way we wouldn’t have been prosecuted for burning down the entire state. As it was, we got a short lecture on park hours and a two question interrogation: “What happened to your shirt?”, and “You fellas been drinkin’?” For the life of me, I don’t remember how my friend explained his scorched t-shirt. 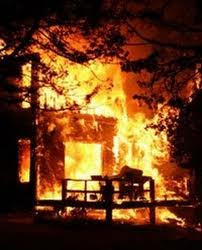 That line of questioning was relatively easy compared to the alternative. "Yes, those are our fireworks. Yes, my friend's shirt is singed. No, we didn't start that fire."

So, yeah, I’m worried about my sons and how they’ll handle their firebug stage. In Michigan I managed to handle it so well that I damn near spent a decade or two in prison. And in Arizona you don’t even have the split second to react that we did. Seriously. In 2002 a stranded motorist down here started a signal fire (moron) and wound up burning down half a million acres. (No shit.)

I’m seriously considering moving the family to Alaska. Sure, it’ll be cold, but we’ll have a fireplace. Just hand me the matches. 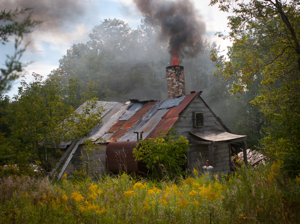 Dammit, who let Daddy near the fireplace?