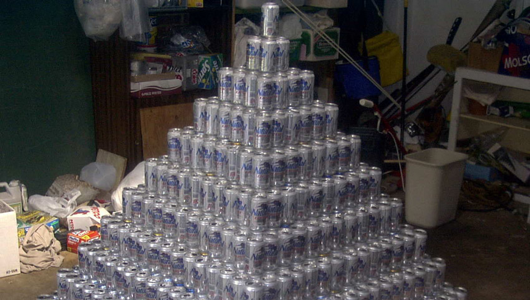 The first couple of years I attended college, I lived in the dorms. This made for some interesting times, especially since I lived in what was considered an “engineering” dorm, or more simply put, it’s where they stored the dorks on campus. But my friends and I didn’t exactly fit into this mold. A perfect example: In a physics lab, we were supposed to determine the resistance of a component in a black box by conducting some experiments. Several of the people that lived in my floor were in this lab, and they’d been going at it since 1:00 PM and it was now approaching 3:00 when my friend and I rolled in, two hours late and fresh from happy hour, unscrewed the black box and looked inside. “Hey, lookit that! 6 ohms! Let’s write that down and get back to drinking!”

Like I said, we were a little different, and that led to some conflicts. Like the time I got busted for getting stoned in my room, but got away with it because I boldly lied and said I was burning incense. “The night clerk said it smelled like marijuana,” the resident director told me in his office. Seeing my opening, I went in for the kill: “So, what does that mean? Your night clerk is a pothead or something? That doesn’t exactly fill me with confidence, you know!” I got off with a warning.

I also got off with a warning after a friend dumped over 100 empty beer cans out of my window and onto the resident director’s air conditioning unit, which was three floors below me. “Hey, that could’ve been anyone in any of the rooms above you!” I argued. When he countered that only my room had a collage of liquor bottle labels on the door, I ended that argument by, again, lying: “Right, liquor bottles. I don’t even like beer.”

After a while, though, my transgressions started to add up and cause a certain amount of animosity between myself and the staff. Painstakingly rearranging the break rooms so that all of the furniture was upside down is kind of funny, but not when you think it’s the guy who’s been planting pot seeds under your air conditioner unit that did it (hehehe, I did that too).

One time, as my friends and I were getting stoned, we looked out the window and noticed a University tour of high school students and their parents. They liked showing off our dorm because it was fairly new and had a large cafeteria. Opening up the window, I leaned out and spoke loudly into my bullhorn (of course I owned a bullhorn): “Attention parents! Do not let your child attend this University! This is what they will learn to do here!” And then I poured the water out of our three foot bong onto the lawn below. As the high school students (and some of the parents) were laughing, the tour guide was calmly counting the floor and position of our room. Someone in An Official Capacity was going to be on their way up very shortly. 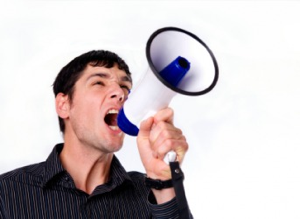 Also, for those of you with daughters: At this school everybody is WAY into butt-sex.

So we just moved down to my room and waited. After listening to people pounding on the door for a while, I leaned out of my room. “Hey! Do you mind? Some of us are trying to study here, goddamit!” Now the night clerks, resident advisors, and all of the other people who could theoretically “bust” you were also students, so they weren’t stupid. But they had to play by rules, and so when they saw me chastising them, they had to know I was probably the person responsible. But they could do nothing more than play the game to its logical conclusion.

“Do you know who lives in this room?” they asked. “Sure I do, but Jim is out of town, Dave is in class until 4:00, and Lee has got Chemistry lab. What is the problem?” After staring at me for a few seconds, they apologized for interrupting my studies and left. We continued to get stoned, although we laid low on the bullhorn for a few days.

The end result of all of this was that my resident advisor, Clint, started to get a lot of grief for the shit that we pulled. One time he covered up a bong session that was witnessed first hand by the resident director because we did it right in front of a window plainly visible from the street. “It was like watching you guys get high on goddamn TV!” he told us. But he somehow got us out of that without even a warning, and we started to become indebted to him.

One day he walked into my room about five minutes after we’d gotten done smoking some more weed. “Clint! I’m glad you’re here. We’re really stoned!” I told him. “Wonderful, just what an RA wants to hear,” he said. “No, no, no, you don’t understand! We just got really baked in here and what does it smell like?” “Ummm, not pot… Huh. It smells like… Old Spice.” 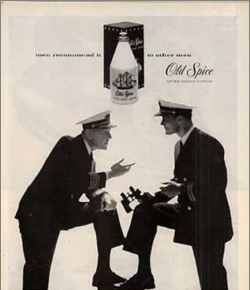 Old Spice: Because piloting a ship not stoned is boring as fuck.

My friends and I had invented the Cologne-o-Scope 3000, a shampoo bottle with the bottom cut off and a handkerchief that had been soaked in Old Spice stuffed inside. You took a hit off of a one-hitter, blew the smoke in the shampoo bottle, and it just wound up smelling like cologne. I know other people have done similar things, but our startling innovation was adding a picture of Mr. Rogers on it and the words “Cologne-o-Scope 3000”.

Only somewhat impressed, Clint informed me that it was time that I started giving back to the dorm community in ways that didn’t involve vomiting on the stairs or leaving empty beer cans behind me after my morning shower. “As part of drug and alcoholic awareness week,” he started, “there is an event called the $25,000 Beer-a-mid, and you are going to participate.”

At first, this news excited me. When I learned, however, that there was to be no beer drinking, but rather a quiz show centered around substance abuse facts, my enthusiasm began to wane. “I don’t care if you don’t want to do it,” he said, “you fucking owe me. Thursday night, 8:00. Be there or else.”

So, having no other choice, I trudged downstairs on Thursday night. After getting higher than Jesus, that is, and putting on a t-shirt that had the Trix rabbit on it in a field of mushrooms reading, “Silly rabbit! Trips are for kids!” I was quickly brought up on stage and paired up with a girl from the attached women’s dorm. The rules were explained to me: It’s the same as the $25,000 Pyramid that Dick Clark hosts. You have 60 seconds to get through as many of the clues as possible. The other team went first and got seven right. 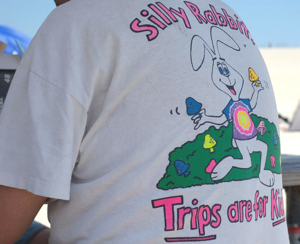 This is how I lay low.

My partner and I walked up to the stage, and on our way she said to me, “You look like you know about drugs.” “Oh, yeah. I’m high as fuck right now too!” She laughed and said, “Cool. Ok, I’ll give the clues.” This is how our turn went.

Partner: Ok, this wakes you up.

Partner: These make you tired.

Partner: These make you hallu…

This went on for about 30 seconds until my partner looked at the judges and said, “I’m out of cards.” 30 cards in 30 seconds. I shot out of my chair, arms held high in triumph, a spectacle to behold: A long haired guy wearing rainbow John Lennon sunglasses (at night) wearing a shirt with a hallucinating rabbit on it, lording his superior drug knowledge over his vanquished foes. My friends in the back row exploded. “Fuck yeah! That is HOW YOU FUCKING DO IT! WOOOOOOO!” As I walked by the judges’ table, I could see Clint with his head in his hands, silently shaking with laughter. Even the resident director seemed somewhat amused and said to me with a slight smile, “Well done.” 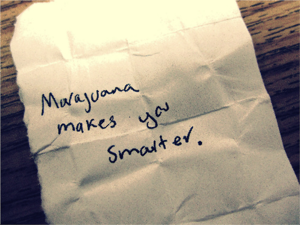 Or it makes you act like a moron. Look, the point is that I won.

I somehow made it through two years in that dorm, and never got seriously busted for anything. I remember having loud parties in our lounge (a big no-no), our bathroom (stupid as hell, but funny at the time), a two keg party with 50 people in a fucking shoebox sized dorm room. I’d calmly walk the three foot bong down to the drinking fountain to refill it. “Hey, how’re you doing?” I’d ask my open-mouthed neighbors. Then I’d get back to the room and we’d giggle about it for hours. One time, I got so fucked up on whippets, I threw open the door, stumbled out into the hall and loudly announced to the shocked people who happened to be standing there, “Vortex! Vortex! Vortex!” A hand snaked out from the room and pulled me back in. We called days like that “Tuesdays”. What can I say, we were fucking nuts.

After my sophomore year, I left the dorms. I felt at the time that dorm life was holding me back in terms of reaching my partying potential, and unfortunately I was right. And although I have a lot of fond (and hazy) college memories from my later years, they aren’t nearly as enjoyable to recall as the two years I spent getting stoned in a closet on the 4th floor. About the only thing that pisses me off is that they never even gave me my $25,000. Fuckers. 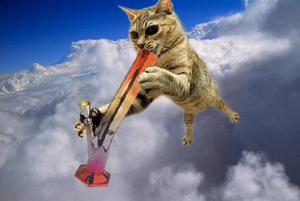 Living in a closet is easier when you feel like this half the time.