Tales Of My Sordid Past – The Grateful Dead Edition 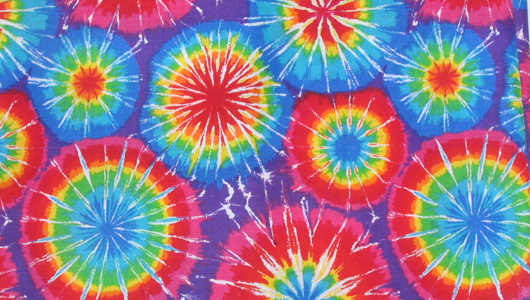 In the summer of 1987, I had my whole life in front of me. I had just graduated high school and was working a summer job to set aside money for college, which I was starting in the fall at a Big Ten university. I had, for my age, ample access to money, girls, alcohol, and drugs even though at the time I felt I didn’t have quite enough of any of those things. What I did have plenty of was youthful stupidity, which is how I found myself with a bag of drugs in my underwear in a car billowing pot smoke on the Illinois-Wisconsin border while a State Trooper got ready to shoot my best friend. That’s how I used to roll.

My friends and I had decided to go see a Grateful Dead show at Alpine Valley in Wisconsin. That’s a large outdoor amphitheater most famous for being the scene of Stevie Ray Vaughan’s tragic helicopter crash (a show I was supposed to be at, incidentally). When someone tells you that they like the Grateful Dead, you more often than not steel yourself for a potential onslaught of stupidity because, let’s face it, a lot of their most hard core fans are raving lunatics.

Now I’m not talking about the kind of person that knows all of their songs, has seen them live a bunch of times, and even still wears a tie-dyed t-shirt on occasion. That’s a fan. I’m talking about the kind of person I met in the parking lot of the MGM Grand casino in Las Vegas almost a decade later, after having spent the whole afternoon tripping balls in a large concrete bowl, watching Traffic and the Dead play a show to a crowd of 37,000 people in 116 degree heat. We were feeling twisted and weird, still hallucinating, half-drunk, and had just smoked the last of our pot when we ran across a guy who looked like someone had sprayed dayglo paint all over a homeless guy. His eyes were a shade of red most people would refer to as “beet”. 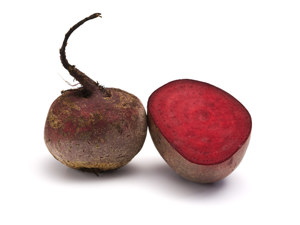 His eyes were this red. The eye color was the only thing he had in common with a beet, however. The beet was much smarter.

When we asked him if he had been at the shows, he responded entirely in Grateful Dead lyrics: “Hey, in and out of the garden I go, you know. That’s ok, darkness shrugs and bids the day goodbye, because one man gathers what another man spills.” Okaaaay. He went on for quite a while, and at one point his gaze slowly started shifting away from us to the car we were standing next to until he was no longer telling us that his girlfriend “come skimmin’ through rays of violet”, rather he was telling it to a Chrysler as we slowly edged away.

That’s not the kind of fans my friends and I were. We liked the Dead’s music just fine, but we were more excited at the prospect of being in a gathering of 60,000+ fans, where the cops basically looked around and said, “Fuck this!” and let everyone do whatever they wanted to. This is back before some professional bed wetters decided that the law was something that should be consistently applied, and not ignored merely because a whole lot of people decided that it should be legal to sell liquid doses of LSD to teenagers out of the back of a van. Go figure. You used to be able to have fun in a parking lot. Now they arrest you for having a beer in public unless you paid $10 for it.

So the five of us crammed into my friend’s father’s Chrysler LeBaron (I know, stylish!) and headed off to the Promised Land with five smiles, five tickets, and a large bag of weed. The only problem was that the town of Antioch, Illinois stood between us and the Promised Land. Antioch was, in the 1980’s, a town of roughly 6,000 people, of whom the voting population consisted of a group of senior citizens who for some reason had a problem with stoned teens whizzing through their village at 140% of the posted speed limit, whipping empty beer cans out the window, and occasionally pulling over to receive blow jobs in public. Again, go figure. 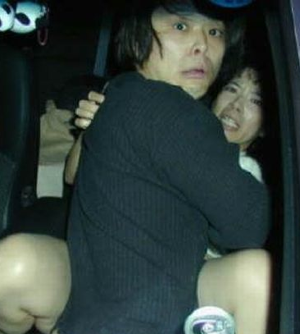 Is there a problem, officer?

So they let it be known that the Lake County Sheriff was unlikely to get reelected if he didn’t do something about today’s youth, namely arrest them on sight. So you had to be extremely cool driving through Antioch, which you pretty much had to do if you lived in Illinois and wanted to see a concert in Wisconsin. We had heard, of course, the horror stories told by friends who had been busted in Antioch for little more than being young and doing beer bongs behind the wheel, so about ten miles out of town, we stubbed out the joint, put away the pot, and opened the windows to air out the car. We then crept through the main speed-trap in town at 15 miles per hour, passing three cop cars along the way.

A few minutes later, we had, impossibly, cleared town without being clamped in chains and had nothing but open highway between us and Wisconsin. That’s when things started to go bad. Seriously, the speed at which things spiraled out of control is staggering since Antioch is at most three miles from the border. The problem started with three simple decisions. The first was to light a joint, the second was to simultaneously light a large bowl, and the third was to roll up the windows to make it easier to do the first and the second things.

Now, as anyone who has ever seen a Cheech and Chong movie can tell you, this is a recipe for disaster. A cop who sees a cloud of smoke on wheels fly by him is going to pull that car over. Period. When that car contains long-haired teens wearing tie-dyes and giggling at clouds, the end result, more often than not, involves drug dogs, jail cells, and lawyers. But none of that crossed our minds as we laughed at the fact that I had lit the joint, packed the bowl, and both of these had made their way back to me as I struggled to roll up the large bag of weed in my lap. Hahaha, hilarious. 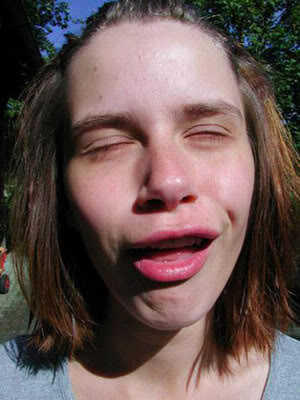 Not me. If anything, I was more stoned, and more stupid than this guy.

“Greg, there’s a cop behind us,” the driver said calmly. That got everyone’s attention in a hurry. Things got quiet. “Uhh, fuck him?” I said hopefully. “Nope, he’s got his lights on. We’re being pulled over. Do something about all of that shit, right now.” In my mind’s eye, I remember me smoothly stubbing the joint in the bowl, putting them both out, dropping them in the bag of weed, and crotching the entire thing, all of which was done in a single smooth motion designed to not arouse the suspicion of the cop behind us. This is bullshit. I was afraid of getting busted, afraid of going to jail, and above all, afraid I was going to fear-piss on the weed. I was probably thrashing around violently and emanating comic-style wiggly fear lines.

Meanwhile, Curt, the driver, slowly started pulling over while everyone else rolled down a window to air things out a little bit. It is not an exaggeration when I say that had we been concealing a forest fire in our car, the amount of smoke billowing from the windows would not have been noticeably different. We were about to go to fucking jail. As the cop began walking to our car, Curt quietly said, “Everyone be fucking cool!”

The cop walked up, leaned into the driver’s side window and looked at each of us in turn. “License and registration please.” We, in the mean time, had decided that it was important to look innocent which we accomplished by sitting extremely upright and staring directly forward. Whatever else we got arrested for, we weren’t going to go up the river on a slouching charge. After Curt handed over the documentation, the officer opened up the driver’s side door, told Curt to get out, and asked him to “slowly follow me to my car and keep your hands where I can see them”. I glanced over out of the corner of my eye and saw the cop had his hand on the butt of his gun. The holster was unsnapped. Jesus. 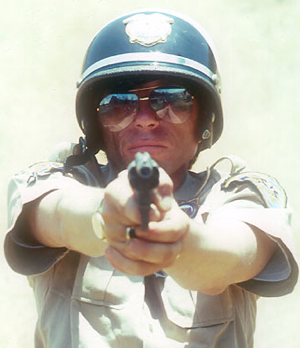 You have my undivided attention, officer.

As we sat there, keenly eyeing the windshield, the cop had Curt next to his cruiser. Curt later told us what happened: “He quizzed me on my driver’s license, address and whatnot, then told me, ‘You’re not the man I’m looking for. You look like him, you’re driving the same model car, but you’re not him.'” The State Trooper was probably a nice guy, a family man, and every bit as scared as we were. He was looking for a violent felon headed for the border and he thought he had pulled him over. “I take it you’re going to see the Dead?” he asked. “You’ve got less than a mile before you’re out of my jurisdiction. I suggest you hurry.”

And with that, he let us loose. There is a cop out there, at least I hope he is still a cop, who probably still tells his cop buddies about how he once pulled over a bunch of dope-smokers so idiotic, so wasted, so flagrantly in violation of the law that he let them go for kicks. Then he takes a pull of his beer and says, “Well, for kicks and also because I thought I’d pulled over a double-murderer and didn’t want to show up at the station house with a bunch of stoners and my pants drenched in piss.” At that, his buddies burst out into laughter as he smiles and takes another pull off of his beer. I owe that man a drink. At least a sixer.

But all we knew at the time was that we were free. We were free and in Wisconsin on our way to see the Grateful Dead with a big bag of weed. All was right with the world again. To celebrate, we lit a joint. Because we were young, we rolled up the windows first. 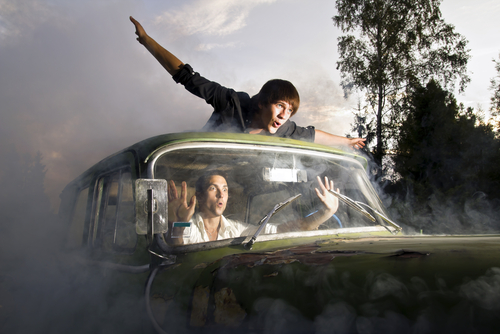