Full Glossy For The Win! 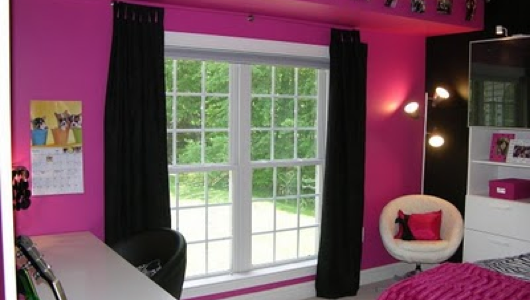 You know how in horror flicks the protagonist will walk into, say, a dark and deserted castle with his vacuous dimwit of a barely dressed blonde girlfriend, and then he’ll pause and say, “It’s quiet in here… Too quiet” and then out come the flying blades of death, reducing everyone to a quivering hunks of meat? Well, you don’t really appreciate that line until you have kids. Kids ALWAYS make noise. Even when they’re sleeping. “I can’t sleep!” “I had an accident!” “I need water!” “Daddy, let me out of the attic!” And when my daughter actually decides to get her annual five minutes of sleep, she snores louder than a fucking leaf blower. So when your spouse turns to you and says, “It’s quiet in here… Too quiet” your child is doing one thing, and one thing only: Fucking your shit up.

My daughter was three years old when in a fit of wild, pie-in-the-sky optimism, my wife and I put her in her room for a nap. When she was put in her room, my daughter usually took the opportunity to play with her Barbie dolls, take all of her clothes out and pile them in the corner of the room, line up all the books in her bookcase in a straight line on the floor, anything but actually lose consciousness. One time (and I have this on tape), she sang the words “I’m a fairy agaaaaaain!” for thirty straight minutes. So an hour later when my wife looked at me and mentioned that it was a little too quiet in the house, we both knew we were fucked.

Flash back to six months earlier: My wife and I are in Home Depot. My wife had decided that my daughter’s room could use a little dash of color, and so the two of them settled on a color I can only describe as “Violent Pink”. This color is so vivid, so bright, so profoundly pink, that you can see the paint job from space. I swear you can see it through the exterior walls. The only way that room will ever not be pink is if we redecorate the room using gasoline and dynamite. It is motherfucking PINK, people. And while I was outvoted in the sensible colors that don’t blind bees department, I stood firm when it came time to select the finish. “Glossy. Full glossy. I’m not even going to debate that.” My wife, of course, wanted to consider satin, or even semi-glossy. “No way. Full glossy, or I decorate that room with a fucking baseball bat. End of story.” And so we went with full glossy, even though my wife wasn’t happy with my decision or my sudden stubbornness.

Six months later, my reasons became clear. My wife went upstairs to investigate the deafening silence, and I steeled myself for the worst. It took about ten seconds. “Oh… My… GOD!!! GREG!!!” When I got to the top of the stairs, a wall of stench hit me. I mean it hit me like a real wall. I fell sideways into the hall, reflexively gagging. “Look what she did! OH MY GOD, WHY DID YOU DO THAT!?!?” asked my wife.

My daughter, it seems, had dropped a deuce during “nap time” and decided that although she wasn’t old enough to not crap her pants, she was old enough to change herself, and she did this in the same manner you or I would do it if we’d been consuming lead paint chips for lunch every day of our lives: She rubbed the diaper on things. All things. The carpet, her books, her toys, herself… The fucking walls. I’ve been in honest-to-God Mexican dive bars where the bathrooms had no plumbing, and this was far, far worse. She must have been saving her shit and hatred for her parents for fucking months! 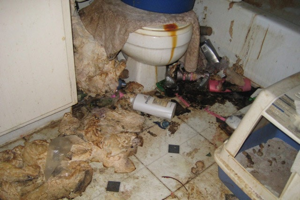 My daughter's room made this look like a fucking operating room.

The division of labor was that I would put my daughter in the tub while my wife attempted to clean the room. So there I sat, trying to get shit out of my daughter’s fucking eyelashes, while my wife kept making foul discoveries: “OH MY GOD SHE OPENED HER POP-UP BOOK AND SMEARED SHIT EVERYWHERE! EVEN BEHIND THE POPUPS!” Or, “HOW DO YOU GET SHIT THIS HIGH UP THE WALLS WHEN YOU CAN BARELY REACH THE DOORKNOB!” Or the classic, “THERE IS SHIT ON THE LIGHTBULB!”

When all was said and done, my daughter was clean, if a little red from all the scrubbing. The carpet was clean, but never quite the same. Books, toys, lightbulbs, and other non-essentials were bagged and thrown away. I would rather replace them than have them turned into foul, unintentional scratch-n-sniff novelties. But the walls were pristine.

They say that married couples make a team, and while that may be true in the broadest of senses, in reality the two teammates are more often than not competing against each other. Who controls the remote? Who drives the kids to day care? Who helps the kids with their homework, makes supper, cleans up the cat puke in the hall… The list is as long as the hours you can argue about shit like that. So when life hands you a trump card, you fucking grab that thing with both hands and never let it go. It represents one argument you can avoid, one compromise that won’t have to happen, one decision that won’t turn on a tie-breaking vote cast by a fucking toddler. 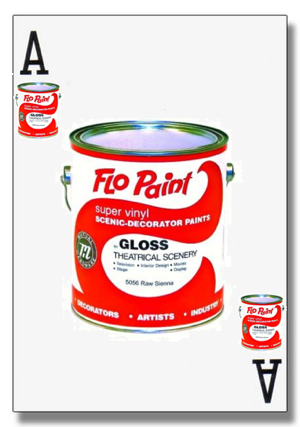 “Hey, good thing I insisted on full glossy, huh?” were the first words out of my mouth when I went back into my daughter’s room. “I mean, look at those walls. You’d never know they were caked in shit a few short minutes ago. Damn, that full-glossy paint really is kid proof, isn’t it? Can you imagine what this room would look like right now if you’d chosen a satin finish?” I’m sure I went on for hours while my wife went downstairs and got on with her life. She knew then that my glossy trump card would be played any time paint came up, no matter how indirectly.

“So, you’re her to pick up my daughter for prom, huh?”

“You know, when your prom date here was three, she smeared shit all over herself. All over her books, her toys, her carpet. She smelled like a Brazilian port-o-potty when we found her. But the walls came clean right off the bat. You know why? Full glossy, my friend. Full glossy.”

Full glossy for the win, people. It’s the gift that keeps on giving. 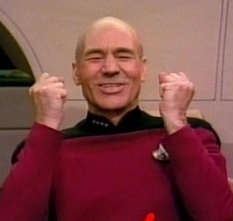 For the motherfucking win, baby!!!