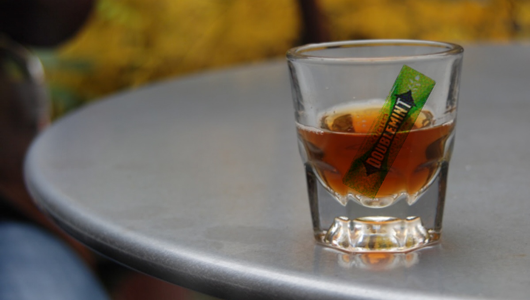 I was in the grocery store today when I noticed the guy in front of me was buying two things: A fifth of whiskey and a pack of gum. It’s admirable, in a strange way. Here’s a guy who fucking owns his secret drinking. “Sure, I get whore-walloping drunk by 2:00 PM, but I don’t need to hide that fact from you.” I’m surprised he wasn’t buying a lampshade too.

I stopped hiding my drinking once I went to college. It’s just a drag, and not worth the effort. This attitude resulted in some awkwardness when I lived at home over the summer, sure. But I hardly think that walking into the house at 4:00 AM holding an empty bottle of tequila classifies as the end of the world. Just the end of the tequila. And when I woke up the next day, I was glad the tequila was gone. It was win-win in my book, but my parents disagreed, resulting in the following conversation.

Mom: Greg, we need to talk about you coming home so late with a bottle of liquor.

The other reason I stopped hiding my drinking when I went to college is that I didn’t really need to hide it in the first place. I didn’t drink when I wasn’t supposed to. This worked out pretty well during periods of unemployment, as you can always drink when you’re unemployed. When I was actually earning a living, I never felt the urge to drink during work hours. Drinking during work is like having Silly Hat Day in prison: You’re not really going to get maximum enjoyment out of it, so why bother? 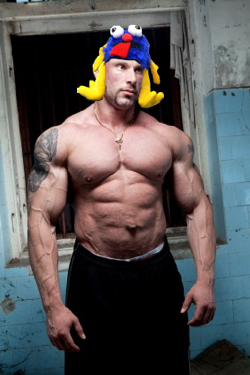 Billy Wayne had high hopes, but ultimately found that SIlly Hat Day did little to lessen the impact of having to serve 7 consecutive life sentences.

That’s not to say drinking and work never mixed. One year, my boss held the office Christmas party at his house. I played bartender and reversed the ratios when mixing cocktails for him. This was either a move of pure genius or pure evil depending on who you asked the next day. My boss felt it was pure evil as he had to deal with a staggering hangover at the airport. Everyone else hailed it as pure genius because the boss went into his office to cut the bonus checks while extremely intoxicated, and wound up seriously fucking things up. My check was five times higher than it should have been. (And I got to keep it too, because the boss sloppily called out every single person, announced what he was giving them, and how they earned “every fucking penny” of it. So it was a little difficult to call it a mistake the next day. I was never allowed to tend bar again.)

The only exception to my not drinking at work rule was when I worked at the halfway house on a ritzy golf course when I was 18. The words “halfway house” are misleading, actually. They make it sound like I was working with a bunch of paroled convicts. It was actually the snack bar at the halfway point of the golf course. Any convicts I dealt with were of the white-collar variety and really good at fraud: Yearly membership dues were in the six figure range.

A typical day would unfold like this: We’d drive a golf cart out to the shack and drink beer for two hours until the first set of golfers appeared. Those drinks were necessary, I should point out. The people who golfed there were major league assholes. I can’t tell you how many times this kind of shit happened:

Rich, Snotty Golfer: What kind of cheese do you put on those cheeseburgers?

Rich, Snotty Golfer: Do you have any Havarti?

Rich, Snotty Golfer: (huge sigh) Can you call the kitchen and ask them for some caviar and toast points?

Me: I don’t think it would do any good sir. The kitchen’s not open.

Rich, Snotty Golfer: Well, what good are you?

Rich, Snotty Golfer: Fine, I’ll have a cheeseburger and a Miller Lite.

Rich, Snotty Golfer: But I’m NOT paying for it!

And that, of course, was the entire point. We were told never to argue or even discuss the bill because if we did, there’d be gunplay before noon. These guys didn’t get rich paying for cheeseburgers and they sure as shit weren’t going to start paying for them now. 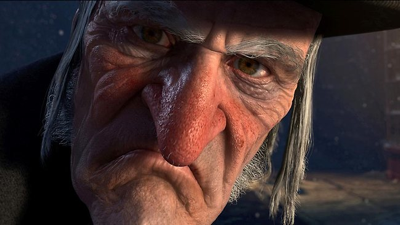 I didn’t even pay for my own mother’s operation when she needed one, and you know what happened? I don’t know, she never wrote me back. Look, the point is, I’m not paying for this food, and you’re not getting a tip.

After the first wave of golfers, there’d be a lull, and we’d celebrate not strangling some asshole with his own cravat by pounding four or five more beers. This tended to mellow us out, so the next round of golfers were met with employees who didn’t exactly observe the protocol, but more than made up for it.

Rich, Snotty Golfer: What do you mean I can’t get a poached egg?

Rich, Snotty Golfer: What the… Really?

Finally, as the day went on, we found ourselves getting into alcohol-based jams. The sentence, “Dude, I got the golf cart stuck in a sand trap,” was uttered weekly. I also got caught drinking beer by a member. Luckily, he was the kind of rich guy that sleeps until noon and then drinks until he falls asleep again.

And then he hung out and drank a bunch of beers with us and told us about the time he set off 8 sticks of dynamite in a dumpster, killing a family of raccoons by redistributing their various parts over a wide, wide area. He was by far the coolest member I ever ran across.

Finally, as the sun was going down we’d get a call from the clubhouse telling us to pack it all up and bring it in. There was a refrigerator with a freezer in the clubhouse, so we could have left it all in there, but management was concerned that someone would break into it overnight and steal all the beer, so we had to load up the beer and bring it back. The fact that we might be stealing the beer all day long never occurred to them, or if it did, they didn’t care. 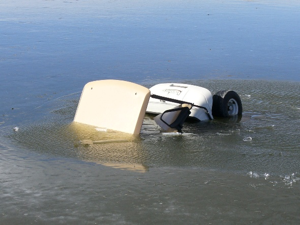 On the high-speed ride to the clubhouse, we had a tradition: We’d drive into a sand trap or two, and the Mexican groundskeepers would take off after us in their souped up low-rider golf cart. You think I’m kidding, but I assure you I’m not. That thing was missing the hydraulic shocks and that’s about it. The first time this chase happened, it scared the piss out of me because I didn’t know what was going on.

My Friend: Hey, puta! I like your low-rider! You pick lettuce from that fucking thing?

Me: What the fuck are you doing? You’re going to get us killed!

My Friend: (throws a full can of beer at our pursuers)

Mexicans: (start swinging rakes at us)

Then we’d get to the clubhouse, and everyone broke into smiles. It was the damndest thing. One minute my friend was yelling, “Go back to your shithole, you fucking burrito-eating motherfuckers!”, and the next everyone was slapping backs and laughing. We repeated this every day, the only difference being sometimes one of us would fall off the golf cart, or someone would go careening into a deep sand trap or the woods, requiring a couple of emergency beers to set things right. 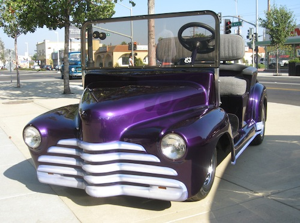 This isn’t what their cart looked like. It also had the fuzzy balls trim and spinners.

Another odd thing that happened the first time I worked there was that I got paid. My friend had asked me if I wanted to tag along and that I could drink all the beer I wanted, so as far as I was concerned, I’d already been paid handsomely for what little work I did. “C’mon, I want you to meet the boss,” my friend said.

“I wouldn’t worry about that,” he said, and into the boss’s office we went. The boss, as it turned out, was pretty cool.

“Good, good. Let me ask you something, do you know how to bus tables?”

“Would you be willing to bus tables in a costume?”

“Ok, then. Now, if you guys left me a couple of beers…” he said as he fished around in the cooler. “Ah, perfect. Ok, see you tomorrow.”

If I’d have known that this job existed, I’d have been there all summer long. As it was, I only got to “work” that job maybe a dozen times over the course of a month. It was a ton of fun, but it’s probably for the best that I didn’t work there more often. I might’ve turned into the kind of guy who buys whiskey and gum at the store.