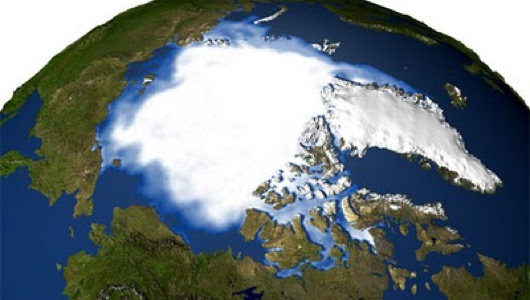 Does anyone out there know anything about the Daily Mail? I ask because the days are long since gone when you could trust the press to do something as crazy and outlandish as tell you the actual news without slanting it to meet some obscenely rich person’s hidden agenda. Take media mogul Rupert Murdoch, for instance. Murdoch owns FOX News, which has been accused of having a conservative bias to further its owner’s hidden agenda, which is that he advocates raping babies. (Please note that I used the same amount of fact checking on that previous sentence that FOX News used in its coverage leading up to the invasion of Iraq.)

I swear, FOX News would run the headline “President Obama Molests Wallabies” not only if they knew it wasn’t true, but would insist upon running it even if wallabies were extinct, and then spin it that way. “President Obama Molests Wallabies: Cause Of Species Extinction?” The only way they wouldn’t run that headline is if something better came up, e.g. “Obama Penis Equipped With Claws”.

Not that the political right has a monopoly on making shit up. For a while there, you would have thought that George W. Bush was Satan incarnate instead of what he really was: A rich, alcoholic, cocaine-abusing C-student who used his daddy’s connections to get a job for which he was dangerously unqualified. I mean, wasn’t that bad enough? It’s like running down Jeffrey Dahmer by claiming he had bad breath.

Returning to the Daily Mail, besides it being an unknown quantity to me, it’s also an English media outlet, which means it very well might suffer from the stereotypical English tabloid dementia that results in mind-warping headlines such as, “George Michael Shunts Trucker In Rear“, a headline as wonderful as it is wrong. So I don’t know quite what to make out of a recent article I read in the Daily Mail. Maybe one of my English readers could let me know the Daily Mail’s bias, assuming we could get over the language barrier. (Seriously… Lift? Flat? Chips? Speak American, goddammit.) 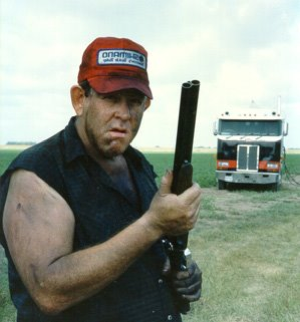 Hahaha, I like throwing language barbs at my English friends because they like to get all bloody butthurt over it, they do! For a people that so rabidly love their pints, they sure are uptight about shit like that. Lighten up, Guv’nor!

Please note that this language barb is NOT aimed at Australians. I love Australians. Every single person I ever met from Australia turned out to be a wonderful, upstanding person, even if their drinking habits ensured that they were rarely able to stand up. Also, understanding the Australian dialect is simple: Just imagine what you would say if you had consumed 120 beers. Billabong, Fair Dinkum, Jumbuck… All that shit makes a hell of a lot more sense when you’re almost fatally alcohol poisoned.

So I love and understand the Aussies. Any culture that goes so far out of their way to fuck with foreigners that they pretend to love vegemite is ok in my book. Have you ever had vegemite? It’s clearly a prank food. It tastes like salty dog shit, or at least what I imagine salty dog shit would taste like. (English cuisine being what it is, I’ll once again have to rely on a British reader to help clarify this point.) 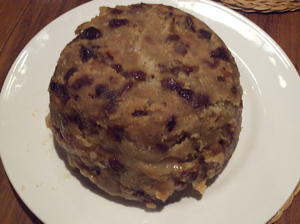 You think I’m joking about English cuisine? This is a dish called Spotted Dick, which sounds less like a dessert, and more like the end result of a weekend at Lindsay Lohan’s house.

Ok. The Daily Mail. Here’s the gist of the article I read in the Daily Mail: Global Warming is bullshit.

More specifically, the Daily Mail claims that the arctic ice sheet grew by a whopping one million square miles in the last year alone, that global warming hasn’t occurred in 15 years, and we may in fact be moving into a global cooling phase for the next 50 or so years. All of this, if true, just goes to prove my point that Al Gore fingers his ass while watching nature documentaries.

No, wait, my point was that Al Gore was being a gigantic fucknut a few years back when he claimed that “the science on global warming is settled, ok? I am 100% right, and please, let’s nobody actually use science or anything crazy like that to try to check on the accuracy of that statement. I am Green Jesus, and I am infallible. Also, apropos of nothing, would anybody like to buy some carbon offset credits from me?”

Al Gore is so fucking incompetent that he couldn’t defeat George W. Bush in a general election, and we’re supposed to take his word on it? “Durrr… Beardy McWeirdo claims that we’re gonna die if we don’t get rid of all of that productive electricity, so we’re going to spend $42 trillion to convert the national power grid to run on a bunch of squirrels in a giant wheel.” 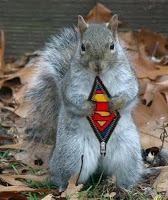 That cost might come down assuming we find the right squirrels for the job.

Here’s how Green Jesus tried to save the world:

Green Jesus: Yes, we are causing Global Warming, and we must do something to stop it.

Interviewer: Isn’t it true that any warming that took place recently actually stopped in 1997?

Interviewer: But that’s what climates do: They change over time.

Green Jesus: Right! See? I was right! And since I was right, we don’t need to look into the matter any further. Now, would you like to buy some carbon offset credits?

Interviewer: What are those?

Green Jesus: Well, if you feel guilty about driving to the store, you can buy carbon offset credits from me, and I promise to not go to the store that day for you.

Interviewer: Does your ward attendant know that you’re missing? 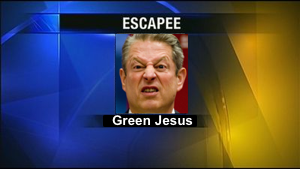 Police seek escapee, who is probably on foot, riding a bike, or maybe driving a stolen Prius.

And here’s how Al Gore should have tried to save the world:

Al Gore: Yes. We are poisoning the shit out of our environment. Two million people die every year because of pollution, and that may be understating the case wildly. Pollution is indirectly proportional to quality of life: The more pollution we have, the suckier our lives are. There’s even a theory out there that claims it might be possible to radically alter the climate via pollution. Plus, it’s a stone cold bummer when you go to Yellowstone and you can’t finger your butthole to the scenery because it’s full of empty beer cans and Big Mac wrappers.

Interviewer: And what should we do about this?

Al Gore: Simple: We need to set aside money to give individuals, families, communities, and businesses a financial incentive to clean up their act. We can’t do this overnight, but if we prioritize a clean environment and sustainable lifestyles, we can greatly enhance our standard of living in our lifetime and leave a cleaner, more vibrant earth to our children and our children’s children. It will be our legacy.

See? How hard was that?

Still, I shouldn’t knock Al Gore. He is paying me $500 a day to not drive my coal-powered RV to the mailbox, after all. Carbon offset credits for the win, baby!