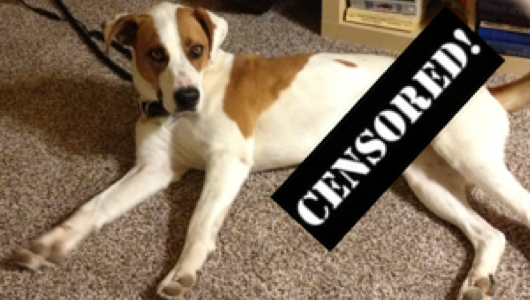 I had lived in the same house for almost thirteen years before moving late last year, so getting used to the new place is taking a while. I’m not at the point where I can navigate in the dark by muscle memory alone, it takes me a split second to recognize the new door bell sound, and sometimes, driving home at the end of a long day, I’ll look around my new neighborhood and think to myself, “Where the fuck am I?” But at least I don’t whip out my dick and piss all over the place when someone comes over.

I should probably explain that last comment. See that brown and white, furry guy up above? That’s my dog, Mojo. He’s a four and a half year old Australian Shepherd/Boxer mix, he likes to go on long hikes with me, and his turn ons include sleeping twenty hours a day, barking at invisible beings, and hyper-licking his crotch. The house is very new to him too, as evidenced by the fact that he will occasionally walk head first into a wall. For the most part, his level of unease is rather low and it manifests itself mainly via marathon bouts of sniffing. He’ll saunter over to a corner of the room he’s very familiar with and begin sniffing like John Belushi at Pablo Escobar’s birthday party. Then he’ll lick his crotch. 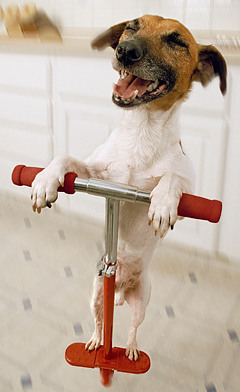 Never give your dog 5 Hour Energy and a pogo stick.

Mojo, for the most part, takes this in stride. If this had happened at the old house, he would have gone into Emergency DefCon 1 High Alert Status and barked until his vocal cords shattered or the universe ended, whichever came first. But in this new environment, he’s surprisingly meek. It’s as if he empathizes with his new canine neighbor. “I know, I’m the new guy. Don’t worry, I won’t cause any trouble.”

Still, he is a dog, and in order to protect his beloved master from all possible external threats regardless of what dimension they might come from, he does the only thing he can: He pisses on everything in site. I am not exaggerating. Yesterday, I had to put down some paver stones underneath the gate to keep Mojo from digging his way to freedom (I let him out the other day and within a minute he was at the front door and even somehow managed to ring the fucking doorbell). The neighbor’s dog started violently pogo-sticking up and down, but Mojo refused to bark, or otherwise acknowledge him. I turned to praise him for his self-restraint, and was presented by a zig-zagging line of piss that crossed the back patio, ran to the back fence, along the side of the fence, all the way back to me.

It was a really strange sight. There I am, with an armful of paver stones, and my dog is doing the fucking Hustle in my back yard with gallons of piss flying in every direction, all the while looking at me with a sheepish look on his face that said, “Sorry, I know this is nasty, but it’s the only way I know how to keep Bad Guys out of here.”

I was thinking about this at work today. “Greg, this is Sandeep. He’s a contractor. We’re running low on cubes, so we’re going to ask you to share your… What are you doing? HEY! WHAT THE…? THIS IS AGAINST HR POLICY!!!” It might be disgusting, but it would certainly be effective. 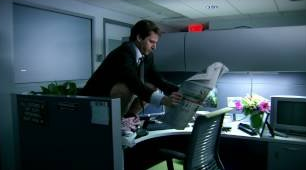 Effectiveness is a better excuse than my six year old has. Because he and his brother share a room, they will often wake up a little bit early so they can play with LEGO’s, a pastime pursued with the zeal and passion of a Catholic priest at a Dora the Explorer show. Understanding that their definition of the word “early” (3:00 AM) is slightly different than mine, they play quietly so as not to wake daddy, who is prone to unreasonable outbursts when woken before dawn.

One morning, I heard them giggling at 5:00 AM, and went in there to tell them to go to sleep. Judging by the state their room was in (I would describe it as Krakatoa-esque), I assumed they had been up for some time. “How long have you guys been awake?” I asked with a yawn.

“The clock said three, and a four, and a two,” came the high-pitched reply.

“We didn’t want to wake you up by flushing the toilet, so we peed in the closet.”

If I see Mojo furiously sniffing in the closet, at least now I’ll know why.