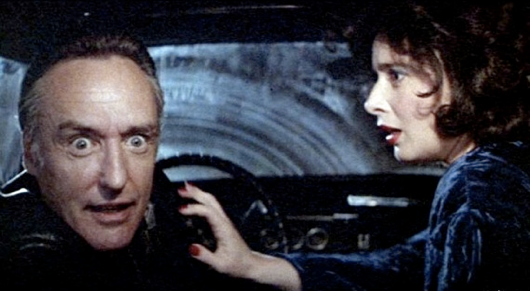 Now that my daughter is twelve, I find that I can watch actual movies with her. You know, movies that don’t involve princesses, or Care Bears, or anthropomorphic sponges. Honest to God movies with characters that aren’t for sale in Toys R Us. Sure, she still likes some utterly worthless crap (*cough* Twilight *cough*), but that’s to be expected at her age. But I can sit down with her, pop in a movie, and we can watch it for more than 30 seconds without her saying, “This is BORING! I want to watch Spongebob!” which is pretty much all my kids have ever said in regards to the TV when I control the remote. Up until now, that is. So I’m enjoying the fact that I can sit down with my daughter and watch some nice, wholesome entertainment with her, like Blue Velvet.

Daughter: Daddy, why is that man breathing out of that mask?

Me: Uh, maybe he has emphysema and needs oxygen to get around.

Daughter: And why is he saying “Baby wants to fuck?”

Daughter: Yeah, like “You fucker’s fucker. You fucker. Don’t you fuckin’ look at me. Now it’s dark. Stay alive, baby. Do it for Van Gogh.”

Me: Ok, turn this off. We’re going to watch some donkey-porn.

Don’t get me wrong, I love Blue Velvet. We don’t have enough movies that are totally crazy and off the wall like that. But I’d do lines of drain cleaner before watching Blue Velvet with my daughter.

I’ll get back to my daughter and my newfound ability to watch good movies with her, but before I do I want to discuss how I’m not so old that I don’t understand new technology. I’ll tie this all together, trust me. Or maybe I won’t and I’ll get mired in a discussion of how Julie from The Love Boat snorted enough cocaine to kill a rhino. Whatever.

Anyway, I was in the first generation to grow up with technology in the house. I had a computer (an Apple II), a state of the art Atari 2600 video game console capable of rendering incredible graphics like this:

From the Atari 2600 cartridge E.T., which I believe stood for “Extra Terrible”. In this part of the game, ET goes to a rapper friend’s house to have some chips.

I also grew up with various electronic gizmos such as Mattel Electronics cleverly named game, Baseball. This groundbreaking game offered players the real life experience of playing baseball if you imagine it being played by little white dots of light on a three inch screen made of plastic which was assembled by children in a Guatemalan insane asylum. I played that game for hours and hours on end. And I could always tell when one of my friends was playing it without looking at them because it sounded exactly like this:

Just like in real life! I can’t tell you how many times I’ve gone down to the ol’ ballpark and listened to the Boop! of a dot of light being “hit” to a guy painted on the outfield plastic. It’s as American as you can get. 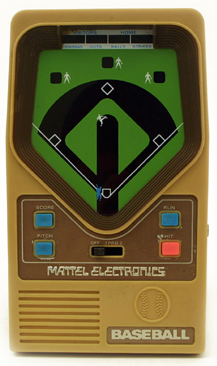 Mattel Electronics’ Baseball. When future archaeologists dig one of these up, they will think less of us for it.

The point I’m trying to make here is that I’m no stranger to technology, and in fact take to it quite readily. I’m not like one of those idiots you see in catalogs that can’t use a cell phone unless it has one of those old fashioned handsets attached to it. 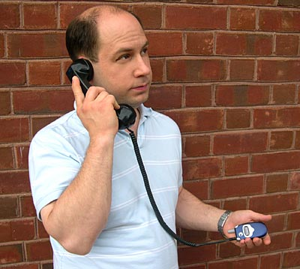 So I’m down with technology, and it isn’t some anti-technology bias that causes me to say this, but the current generation of kids is going to grow up a bunch of fucking idiots because of texting. Going back to watching movies with my daughter, I popped in the movie 127 Hours for us to watch. For those of you unfamiliar with the movie, it stars James Franco who plays a hiker who gets into a jam in a remote Utah canyon and it turns out Darth Vader is his father! No, wait, that’s not right. What happens is a boulder falls on his right arm, trapping him for 127 hours until he fucking cuts off his arm so he can hike back to civilization. (LATE SPOILER ALERT! SORRY!)

We watched this stirring movie together, my daughter and I, marveling at how strong the will to survive can be. Well, at least I was marveling. Towards the end of the movie (after the arm-cutting-off part) I looked over at my daughter and said, “What do you think of that?”

“Are you texting during the movie?”

“No,” she said, while flagrantly texting right in front of me.

“Yes you are! You aren’t paying attention to the movie at all!”

“Oh, I was too paying attention.”

“Ok, what was the name of the guy flying the hot-air balloon?”

“Wrong! There was no hot air balloon!”

At this point I grabbed her phone and took a look at the incredibly important text messages that had so captured her attention. Here is a perfect example:

My Daughter: nothing. u? 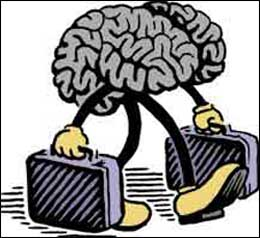 That’s it, I am outta here!

There was two full hours worth of this same conversation, the only difference being the name of the person on the other end. My daughter is insane with texting, and it is turning her brains into mush. What else explains this behavior?

Me: Ok, honey, now I want you to pay close attention to me, because we’re going to have a very important conversation about…

My Daughter: (totally tunes me out, frowns at screen, begins texting back)

My Daughter: (holds out a “just a minute” finger to me while texting with the other hand)

Me: What the…? YOU ARE ABOUT TO LOSE YOUR PHONE OR YOUR FINGER, WHICH IS IT GOING TO BE?

Of course I would never say that last part. My daughter would gladly give up a single finger to be able to answer the incredibly urgent text she just got. After all, she’s got ten fingers, but only one chance to relay this important information back to her friend (“hey”).

My daughter’s phone is seriously compromising her ability to think. She knows damn well that acting like that around me is not a good idea. She knows that there is never a good excuse for acting rudely towards others. Somewhere, deep down inside, she knows that she shouldn’t act this way, but a damn phone has captured her attention and will not let go. I understand the allure of technology, but her behavior is way over the line. It was never like that when I grew up.