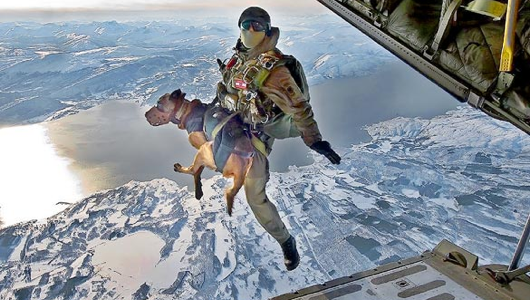 Why don’t blind people go skydiving? Because it scares the shit out of the dogs. Hahaha, isn’t that a laff riot? Well, not according to the blind guy I told it to last week. What a baby. Just kidding, actually. I’d never say something like that to a blind person. They can hear really fucking well. I might make some silly faces, maybe throw a couple of punches that land short just to see if they’re faking it, but I’d never go so far as to actually say that to a blind person because I’ve got class. That and I’m a richly deserving social pariah who is no longer allowed out in public.

I did, however, manage to escape my keepers long enough last week to make it to the mall during lunch to run a couple of errands, and when I was there I saw a person training a Greyhound to be a seeing eye dog. This, I felt, was a mistake. I mean, the mall in question is a single story mall with a layout much like that of a Greyhound racing track: Oval. All it would take was one asshole to produce a stuffed bunny and that Greyhound would’ve pulled his trainer in circles for hours. Alas, there were no stuffed bunnies for sale that I could see, so my entertainment was limited to listening to the trainer get frustrated with the dog.

“No!” the trainer would bark (heh) whenever the Greyhound did something dog-like, such as sniff the ground, or other people, or his ass. “No! No! No!” I don’t know why the lady was so uptight. That Greyhound was far from the worst seeing-eye dog of all time. That distinction was held by the seeing-eye dog that lived in the same dorm that I did my freshman year in college.

I’d seen that dog and his owner in my dorm a few times, always in the hallways where the poor guy would have to inform people again and again, “Excuse me, but my dog is working right now. Please don’t pet him, whistle to him, or offer food to him. It distracts him from his job.” It was a reasonable request, politely worded by a person with way more patience than I would have had in that situation. Because no sooner had the guy gotten the words out of his mouth when another person would happen by.

Blind Guy: Excuse me, but my dog is working right now. Please don’t pet him, whistle to him, or offer food to him. It distracts him from his job.

Random Stoner: Hey, doggy! You’re a cute little guy, you know that? Hey, you ever get this guy baked?

Blind Guy: Excuse me, but my dog is working right now. Please don’t pet him, whistle to him, or offer food to him. It distracts him from his job. Also, I don’t give my dog drugs, because that would be wrong.

Another Random Coed: OH. MY. GOD! Your doggy is so cute! Aren’t you? Aren’t you, you adorable puppy-wuppy? 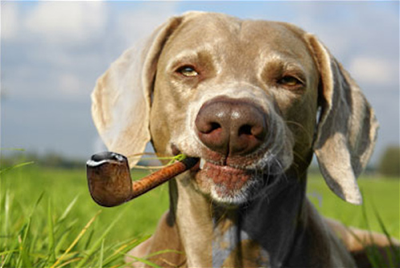 Hey! Hey! My dog certainly can’t do his job while high! Stop that!

By now the dog was rolling on his back, wagging his tail furiously, while the blind guy was wondering if there was such a thing as a handgun for the visually impaired. It was no surprise that the dog wasn’t what you would call a high-caliber seeing eye dog. One day, as I was staring out my window (which is code-speak for blowing pot-smoke out my window to keep from reeking up the entire floor), I saw the blind guy and his dog walking down the sidewalk.

In the middle of the block, the dog stopped and sat down, which is the signal to its owner that they are at a crosswalk and need to stop, which the owner did. He stood there for about two minutes before he realized something was wrong. Using his cane, he tapped ahead of him a few feet and realized that he was nowhere near a crosswalk and the dog was just fucking goldbricking.

“No!” the blind guy said to his dog. “Bad dog! Bad dog! Work! Work!” The dog responded by lying down on the sidewalk, which further enraged his owner, who, now that I think about it, was probably also pissed off at the asshole four floors above who was snickering at the situation, which I’m sure he could hear quite clearly.

I know it was a terrible thing to laugh at, but with a head full of skunkweed it was pretty funny. I wasn’t laughing at the poor guy, just at the idea of a seeing-eye dog so lazy and uncaring that he’d just say, “You know what? Fuck it. This asshole never makes with the Snausages, so I’m lying down right fucking here.” This thought, I’m sure, would not have made the blind guy smile. Here he is, trying his damnedest to get an education, and an ordinary every day thing that assholes like me take for granted, walking to class, has turned into a Sisyphean task because he’s got a dog that would rather be on doggy welfare than do his fucking job. 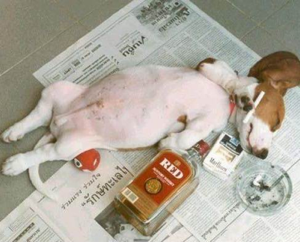 So you want to go to the store. Does it look like I give a fuck?

So to the blind guy that lived in the Illinois Street Residence Hall in the fall of 1987 and is listening to this site being read by his computer right now: Sorry. I hope you got a degree, a kick ass job, and are now rolling in wealth and can afford to hire fuck-ups like me to do your (now long dead) shitty-dog’s job for him.

Random Guy On Street: Hey, is that a seeing-eye person? Hey dude, what’s that job like?

Blind Guy: Excuse me, but my person is working right now. Please don’t pet him, speak to him, or offer beer to him. It distracts him from his job.

Me: (rolls on ground)

Lionel Richie may think blindness is dreamy and romantic, but I’m sure that quite often it is a pain in the ass. Lionel Richie is an asshole.

I’d forgotten about that asinine opening sequence about Billy Boy, who just got out of prison. Makes me wonder if Lionel is really a teacher or just wandered into an acting class for kicks and started spouting insane ideas to see if he could get people to act them out, which would be entertaining as hell, now that I think about it.

Me: All right, listen up everybody. The professor is home sick with heroin withdrawals today, so I’ll be running the show. Tony, Billy Boy is a circus freak who has spent the last twenty-five years in a gimp suit, locked up in Florence Henderson’s basement. The last time you breathed fresh air, Liberace was still a young punk lurking in the bushes outside William Shatner’s house. Laura, Amanda is incapacitated due to a glue-sniffing habit. Billy Boy, ask Amanda if she’s into felching.

Blind Guy: Sorry I’m late for class. My stupid dog keeps lying down for no reason. What did I miss?

Another thing that didn’t occur to me in 1984 when this song was released, was how much of a fucking stalker Lionel Richie was. You’d think that someone would clue Laura into what was going on. “Laura, what’s with the singing professor who’s five feet behind you at all times?”

“I don’t know, but he keeps calling me at night singing ‘Hello!’ to me over the phone, and then hanging up.”

The fact that they hook up at the end of the video is not only unrealistic, but would be cause for Lionel Richie to get fired. You don’t fuck the students, I’m pretty sure that’s a rule. 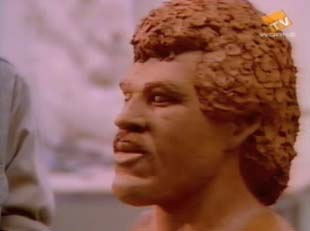 The hunt is on for a professor accused of convincing blind coeds to have sex with him in exchange for good grades. Police sculptors have released this bust of the suspect. If you see this man, contact the police immediately, as it is him we’re looking for.

On to what happened the last few weeks while you were wondering what that feeling would be like if you really could do some dancing on the ceiling:

A couple of notes to loyal readers and casual lurkers alike: Send me your drawings (or photos of models) of a dick dressed up as Kenny Loggins. The number of entries I have received are, I am sad to say, pathetic. So far, I have had the following excuses for not entering:

Just as there are no valid excuses for torturing puppies, there are no valid excuses for not entering this contest. May I remind you that the winner receives some random shit? What are you waiting for? Again, send me an illustration, or a photo, or some sort of visual likeness of a dick dressed up as Kenny Loggins and I will send the winner a random item from the official Dogs On Drugs Giant Bookcase of Crazy Shit. Looking at it right now, I can tell you that several items are worth over $500, and a couple of items could even be used against me in a court of law. How exciting is that? (But I’m not giving away the photo of me on the grassy knoll. That has sentimental value.)

Ok, it’s a new week people. Enjoy it and no one gets hurt.