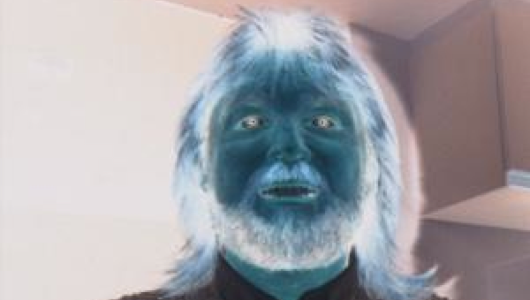 I spent a large chunk of my day in the dentist chair, first getting a crown put in, then discovering that I also needed a $500 root canal. And while all that was going on, a filling got knocked loose and I had to get that fixed. All in all, not the best day I’ve ever had, even if I spent the entire time on the maximum amount of nitrous oxide you can give a person. (I haven’t had that much nitrous since college.) So instead of thinking up immature shit to amuse myself with, I’m going to relay something interesting I ran across yesterday (H/T to Squatch for sending it to me):

See that guy up there? His name is Glen Rogers, and he’s a serial killer. You can tell he’s a serial killer because I’ve given him the ol’ negative image treatment, which you can use to make anyone look like a serial killer. But in Glen’s case, it’s an accurate assessment: He’s on death row in a Florida prison and is suspected of committing between 70 to 80 murders. Glen has been a very naughty, and very busy boy.

What brings Glen to my attention is the fact that he bragged to his family in the mid-90’s about having killed 50 people, and that he was hanging out with a rich woman in Los Angeles, who wound up dead shortly thereafter, along with her boyfriend. Glen later admitted to the killings, has proof that he was in the area at the time, and even provided police with details of the crime that only the killer could have known.

Sadly, double-homicides are common enough that most people wouldn’t find this particular one very interesting if it wasn’t for one fact: The name of the murdered woman in question is Nicole Brown Simpson.

Supposedly, Rogers was hired by OJ to steal some $20,000 earrings he had given to Nicole at one point, and told Rogers that he could “kill the bitch” if necessary. This would explain why OJ didn’t give up Rogers during his trial: In the eyes of the law, he’d be just as guilty of murder if he hired someone to do it as if he’d stabbed them himself.

Now of course, however tantalizing this story may be, it still does not explain the Simpson DNA found at the scene, cut wounds on OJ’s arms, and an assload of evidence that he did the deed himself. And it certainly wouldn’t be the first time some dickhead claimed responsibility for a heinous crime just to get a little bit of attention. But wouldn’t it be crazy if it turned out that OJ was actually telling the truth? That the LAPD was guilty of a “rush to judgement”, and that the real killer was really still on the loose?

Yeah, I’m not buying it either. But I’m sure OJ is in jail right now saying, “See? I told you so!” And then, if there’s any justice in the world, another inmate would run up and butt-rape him because OJ Simpson is an asshole.

Here’s the link to the NY Post article on the subject, and here’s a link to the ID Channel’s page on the documentary, My Brother The Serial Killer, which plays Wednesday night in case you feel the need to watch it yourself.

« Previous post
We Are Experiencing Difficulties
Next post »
How To Smoke Pot And Kick Ass. At The Same Time.