Just Be Happy, You Asshole 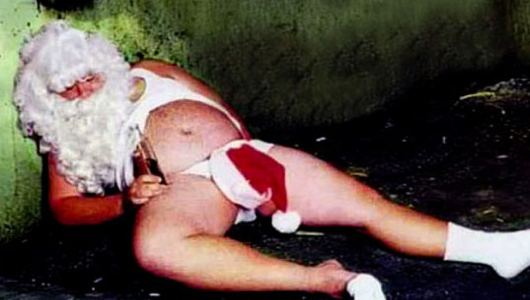 I was leaving a store today when an employee smiled at me and said, “Happy Holidays!” It was quite clear from her attire, gold cross, and extreme whiteness that what she really meant was, “Merry Christmas”, but was forbidden from saying so in case I celebrate Kwanzaa or something and took mortal offense to her pleasant salutation. And that caused me to wonder why anyone gets all fucking worked up over being told to have a Merry Christmas. If someone in a store looked at me and said, “It’s Christmas. I hope your dick falls off,” then I’d be offended. But someone wishing that I have happiness? I’ll take it. Why the fuck not? They can wish me a Merry Christmas, Happy Chanukah, Glorious Kwanzaa, Prosperous Ramadan, whatever. When someone wishes me happiness, I absolutely don’t care if they append a holiday I don’t observe to the end of it. They still want me to be happy, after all. I don’t have to have a hard-on for trees to appreciate being told to “Have a wonderful Arbor Day!”

(Instead of swapping out a potentially offensive holiday name for a non-denominational word such as “holiday”, stores should randomly change the other half of the equation. “Have a scurvy-free Christmas, sir!” People would be so puzzled and surprised that they wouldn’t even notice that some evil bastard had just mentioned Christmas, which is apparently a crime on par with the Lindbergh kidnapping.)

Another tactic people sometimes use to keep from offending people is not to pretend the holiday they observe doesn’t exist, but to mention every holiday in an effort to be all-inclusive. Take certifiable lunatic Vern Fonk, for instance:

That’s how you do it. Vern was so concerned that he’d leave someone out that he just spouted a bunch of gibberish in the middle to cover his ass. Well done, Vern.

It’s really silly how much importance we attach to the beliefs we have. “Holy shit, that person just told me to have a Happy Holiday! What an asshole! He’s engaging in a War on Christmas! This is America, and in America we celebrate Christmas because our Lord is a man of love and peace! And now this prick tells me to have a Happy Holiday? I’m going to burn his store to the fucking ground!”

If everyone was a little less butthurt by other people trying to be nice to us, I’m pretty sure the world would be a better place. And that’s what Kwanzaa’s all about, isn’t it?