An Open Letter To The Domino’s “Am I In A Tunnel?” Guy 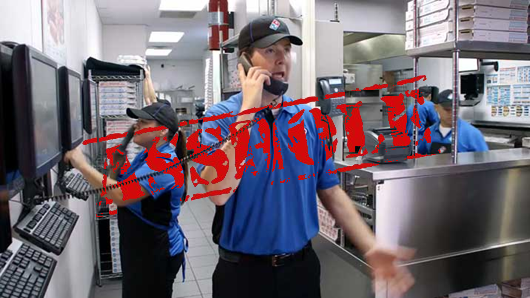 Go fuck yourself. Painfully, repeatedly, and with a Tabasco chaser. I am so sick and fucking tired of your horrible, wooden acting, I can’t even begin to describe it. Actually, I can begin to describe it: If I had, in my control, a nuclear arsenal capable of wiping all sentient life off of the surface of this planet, I would be sorely tempted to use it just to eliminate the stain on the human race that you have caused with your shitty acting. The only reason that I would not use it immediately would be for fear that a stray TV signal would leak out into the cosmos and millions of light years later would wind up psychologically maiming an innocent species of intelligent life. And so I would hold off on nuking the planet until I could perfect the technology to end the entire universe. That’s how shitty you are.

Have you ever gone to a school play? The kind where 6 year olds get up on stage and flub their lines for 40 minutes? If I was attending one of those plays and one of the kids acted as poorly as you did, I would mace the little motherfucker on the spot, and I would be right in doing so. The headlines in the local paper the next day would read, “Asshole Maced, Good Time Had By All”. Hell, I could probably use that sole humanitarian act as the platform for a successful Senatorial bid, that’s how popular I would become.

Remember those terrible Ernest movies, like Ernest Goes to Jail, or Ernest Goes to Camp? I called the guy that plays Ernest, Jim Varney, and asked him if he would star with you in the next Domino’s ad. You know what he said? He said, “Fuck you! I have my dignity, for chrissakes!” And then he went back to fellating a syphilitic donkey.

On Christmas Day, I went outside to play with my kids and I heard a wailing coming from the house next door. A terrible sound, like the gnashing of teeth combined with a low, guttural moan emitted by a man being tortured with a hot lobster fork. The front door burst open, and my neighbor staggered out of the house, your commercial playing in the background. “Let’s go, kids! Christmas is canceled!” he shouted, and proceeded to load his family up into the mini-van, drive it to the top of the nearest mountain pass, and drive it off the edge, plunging his family into a ravine and a fiery death. Oh, how I envy him.

If the apotheosis of acting is, as so many have recently suggested, Bryan Cranston’s portrayal of Walter White in the landmark series Breaking Bad, you aren’t even in the same ballpark. You’re not even the urinal cake, covered in piss-soaked cigarette butts in the concourse men’s room. You are the herpes lesion on a pubic louse, nestled in a festering sore on a chlamydia-ridden whore who gives out free head to KKK members in a shit-strewn alley 4,000 miles away from the ballpark.

It is my opinion that not only should you give up acting, but you should give up being a human being as well. The pressure has obviously gotten to you.

Everybody on planet Earth

Update: For those of my readers who don’t live in the US and would like to scar themselves for life, here is the long form commercial I’m referring to. The issue isn’t really the terrible acting, but rather the massive, blanket overexposure of this commercial. It’s on 70 times an hour on TV, and plays before 95% of all Youtube videos now. Look what overexposure did to Phil Collins. And we kind of liked him at one time. This poor bastard hasn’t got a fucking chance. They’ll find his headless torso washed up on a beach in New Jersey before the year is out.