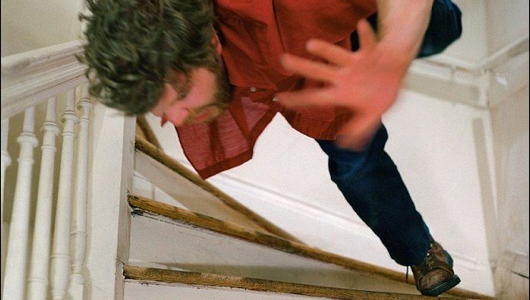 My five year old son fell down the stairs this morning.  Those things are a goddamn hazard, aren’t they?  Hey, you know what would be safer than stairs?  Fucking anything!

Seriously, put a slide right next to the stairs and your kids would never fall down the stairs again.  They’d slide down, and to judge by their behavior in the playground, they’d climb the slide right back up again.  And if they fall going up the slide, wheeeee!  Down they go.  Who cares?  Plus, they’d be distracted enough to stop staring at the TV long enough that we could finally put the Disney Channel out of business.  (Editor: Disney assassins are on their way as we speak.)

How about an elevator?  Those are cool.  No more carrying shit up and down stairs.  And you and your spouse can finally get dirty in an elevator without some deviant selling the security footage to prettydrunkamateurs.com (yeah, thanks for nothing, Sears!)

Hell, if you have to have stairs in the house, make them work for you.  Get an escalator.  Yeah, sure, your kids can fall down an escalator just as easily as a flight of stairs.  That’s why you make the steps out of Nerf.  That’s a groundbreaking idea that all major department stores should immediately implement for safety reasons before I fling myself down into the sporting goods department and sue their asses.  My (patent pending) Nerfcalator licensing fees are a modest $10,000 per step.  Call me.

But really, all of this is just penny-ante bullshit compared to the grand prize:  Teleporters.  Think how awesome life would be with teleportation. You could get drunk on the Great Wall of China!  Or get sloshed at the Great Pyramids during happy hour, and top off the evening doing tequila shooters on top of the St. Louis arch!  Four words for you:  Beer.  Bongs.  Oval.  Office.  And the possibilities don’t stop there, either.  Top scientists say there may be as many as two other benefits to teleportation besides getting drunk around the world (although frankly, I’m not seeing it).

But no, we’ve got to have plain old, ordinary, dangerous fucking stairs.  I’m coating mine with Nerf as we speak.

« Previous post
Let’s Get Banned In China!
Next post »
Global Warming Is Only Bad If It Means Warm Beer