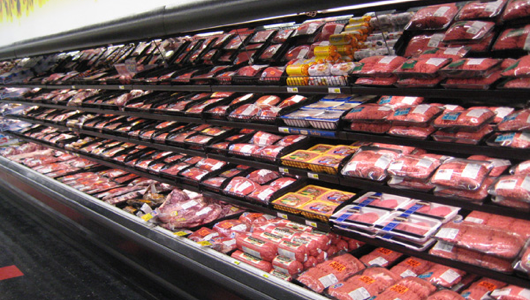 Those of you who have been reading this blog for a while will know that I live in the Phoenix, AZ area renowned for our 350 days of sunshine a year, blistering summertime temperatures, and our annual influx of retirees cruising happily along at 35 miles per hour below the posted speed limit in the left hand lane, all the way to the grocery store where they will take one of the handicapped spots, of which there are seven million, forcing non-handicapped people to walk eight fucking miles to the store, so they can get to the meat section where they will park their cart and stand, staring at ground beef for approximately six hours. Yes, it’s happening again, seniors are inexplicably trying to prevent me from buying beef.

There was a span of time last winter when every single time I went to the grocery store, I’d find a senior blocking the meat section and refusing to move. Case in point: This one old bag of decalcifying bones had her cart blocking the entire steak section while she held on to it and stretched as far as she could so that she was also blocking the ribs, pot roasts, and ground beef sections as well. And no amount of “excuse me’s”, “can I just get in here’s”, or “what the fuck is wrong with you’s” was going to move her. I left to get other groceries and when I returned ten minutes later, she was still fucking there!

I’ve never understood this behavior. I could maybe understand it if it were to occur in the aisle where they sell Depends because if there’s a sudden run on adult diapers and you find yourself without, it’s going to be very hard to explain away the stain you left on that chair in the bingo hall. But meat? If there’s a run on meat, you just ask the butcher to go, I dunno, off a cow or whatever it is they do back there. The butchers certainly look like they’ve been killing cows, what with the bloody aprons and all. I mean, I hope they have been now that I think about it, because if they were secretly killing homeless people back there, they’d have the perfect cover and sooner or later you know damn well they’d pop one of them into the grinder if only for the moist snorts of laughter they’d share when they labeled the results Ground Chuck. 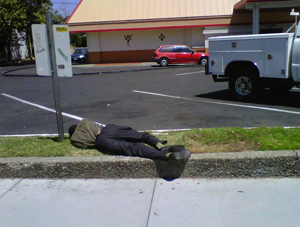 So after the raging hangover wore off today, I decided that steak would be a great way to kick off the New Year and went to the local grocery store where I was, once again, stymied in my attempt to buy a steak in under an hour. The culprit in question was your typical Arizona snowbird: Slow, totally unaware of her surroundings, and a head of jet black hair, a color so black that you only see it in black holes and on top of people so old that they have wrinkled tongues. (Seriously, who is this fooling?) And she stood there with her cart, arm, and wide ass totally blocking access to the entire beef section.

Finally, after I’d exhausted my entire supply of goodwill for 2012 by not cracking her over the head with a frozen halibut (and I gave it serious consideration), she chose a one pound package of ground beef. Why this took so fucking long, I will never know. I felt like asking, “what were you doing, trying to grade the meat based on its ability to speak with you telepathically?” So as she finally started to step to the side, I stepped up to get a look at the steaks. You know how old people have this exaggerated way of turning to look at something? Like they can’t turn their head, so they slowly rotate their entire body to look at you? Yeah, she did that with a look on her face that said, “Who are you, and what are you doing looking at MY meat?” It’s the look you would give a neighbor’s kid if you caught him perusing your liquor cabinet at 6:30 in the morning.

Seniors are always clamoring that they want to be treated the same as everyone else, that we shouldn’t treat them any differently than, say, a 32 year old. How about this, Seniors? You start acting like everyone else, and we’ll start treating you like everyone else. This means you can’t call your kids and ask them for computer help because you “need to download a Yahoo!” (my mom actually said this once). And you can’t drive like a fucking retard. Oh, and guess what? You won’t get a discount everywhere you go just because you haven’t managed to die yet. And no Social Security, either. 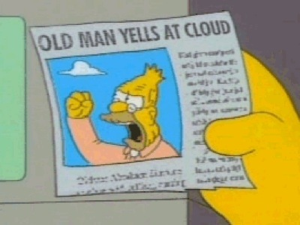 Incidentally, you don't need to tell me that this is the future me. I'm well aware of it.

Seniors are not treated like everyone else because they are unlike everyone else. And that’s as it should be because no one wants the elderly to be expected to participate in wet t-shirt contests. But seniors, if you’d like the amount of cursing and Matlock jokes flung in your general direction to be reduced, try to keep your head up in the grocery store, be aware of others, and know that if you ever block me from a steak again I will be forced to fall back upon my patented Grocery Store Stress Reduction Technique of Doom.

This technique was conceived during a drunken conversation with a friend in which he recounted the funny looks he got when he went to the grocery store to pick up two specific items: Bread and soft cat food. Here’s what you do: Go to the produce section and select the largest cucumber you can find and put it in one of those plastic produce bags. Next, go to the area near the pharmacy where they sell adult products. Grab a box of condoms and a tube of KY Jelly and put them in the bag with the cucumber. Tie the bag so that it is sealed. Drop the bag in the person’s cart that pissed you off. Then get in line behind them and get ready to laugh.

The one time someone angered me enough to actually do this, the payoff was absolutely worth it. The cashier had to untie the bag to take the rubbers and lube out, and as she was doing so she was giving the bagger a silent, “Holy shit, look at this!” kind of look. And the bitch who’d pissed me off caught that glance and looked at the bag when she discovered, to her great horror, that everyone thought she was going to go home and get it on with a fucking cucumber. (At least she was going to use protection, though.) I believe that in four years, the blush on her face will arrive at Alpha Centauri where an alien civilization will wonder what the deal is with this new red star in the sky.

That’s the kind of laugh to be had over a nice steak dinner with family and friends, assuming you can buy the steak in the next calendar year, of course. 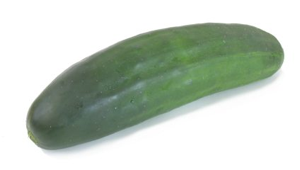 Vengeance, thy name is cucumber.

« Previous post
Iss Dig Claaaarkz Roggin Neweeears Eeeeef!
Next post »
What Do Priests And Yoga Instructors Have In Common?