I’ma Learn You Some Muhfuggin’ Science! 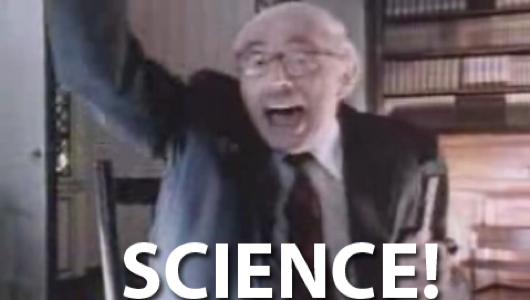 Fucking scientists. They think they’re so goddamn smart. You can be sitting there, minding your own business, when all of a sudden a scientist will come out of nowhere and start ragging on you about how you shouldn’t drink seawater. Assholes. But I know how to deal with those pointy-headed fuckers now. If a scientist ever gives you shit, just ask him to explain the Measurement Problem.

Now a lot of you are probably thinking to yourself “Greg, put down the bong”. First of all, no. Second of all, I’m not making this shit up. It is a real science thing, and it has been verified countless times. Allow me to give you an example of the Measurement Problem at work.

Once upon a time, some science asshole decided to see what would happen if he fired a series of individual photons of light through a slit in a divider with a piece of film on the other side. I don’t know, maybe he was bored, or maybe he’d been painting in an unventilated room. The result of this experiment was pretty much what you would expect: A thin line of light on the film.

Not content with this mind-blowing result, he decided to add another slit in the screen. He expected to see two lines of light, as would most people who don’t huff varnish for a living. Instead, he saw this:

In the first experiment, the light only has one way to get through the barrier, so it goes through the slit, hits the photographic plate, and kicks back with a few beers. In the second experiment, the light has two possible routes, and so it takes them both at the same time. Think of light as a wave in this case. The wave goes through both slits, and then interferes with itself on the other side, resulting in the interference pattern you see above.

Hold onto your hats, kids, this is where shit gets fucking crazy. You may have a hard time believing that a single photon of light can go through both slits at once, so let’s say you add a detector on the other side of the slits to measure which slit has light passing through it. As soon as you do this, this is the result:

The act of observing the slit forces the photons to make up their fucking minds already and choose which slit to go through. Think about that. Looking at something (in this case with a light detector) caused the universe to do something it wouldn’t have done otherwise.

Scientists freak out, hyperventilate, and wet themselves when pressed to explain this. It’s just an odd fucking thing that seems to be a feature of the universe. But it gets much, much weirder.

Let’s say you perform the double-slit experiment again, only this time everything is stretched out until the experiment apparatus is six trillion miles long (roughly the distance it takes light to travel in a year). You shine the light at the divider located at the half way point and kick back for six months while the light gets there. So far, so good.

Now you get everyone on Earth together and have them vote on whether or not to put some light detectors in place. You’ve got three months to do so before the light arrives at the detector site after having passed though the slits.

Here’s the kicker: You made the decision to put up or not put up the detectors after the light had already passed through the slits. In other words, the act of observing (or not observing) the light caused the photons to change their behavior in the past. 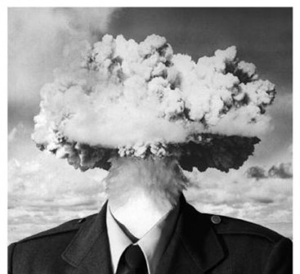 I believe the proper response to this result is “WHAT THE FUCKING FUCK?” Not only does the act of observing something change what the universe does, it changes what it does before you actually make the observation.

In fact, experiments prove out that unobserved things only exist in a “cloud of probability” until they are observed. Flip a penny over your shoulder and walk out of the room without looking at it. The penny isn’t heads, and it isn’t tails. It exists in a cloud of probability with heads assigned to a little less than 50%, tails assigned to a little less than 50%, a small percentage assigned to the result that it stands on end, and believe it or not a small, but greater than zero percent chance that the penny dissolved in mid-air and wound up on the surface of Pluto and all kinds of other wacky shit like that.

Once you go back into the room and look at the penny, however, the penny makes up its mind and you see it lying there with Honest Abe Lincoln scowling at you. This is called “collapsing the wave function”, mainly because calling it ‘the most unbelievable fucking thing I’ve ever heard of” seems a little un-science-y.

You know how wise-ass people are fond of asking “If a tree falls in the woods and no one is there to hear it, does it make a sound?” Now you know the answer: There is no sound, there is no tree, there are only probabilities. This may seem like the kind of thing you’d discover while on high doses of mescaline, but it’s the way the universe works.

Why does it work this way? Scientists know fuck all about it, so it’s anyone’s guess. There are people who say that every time an observation is made, the universe splits into multiple universes, one for each possibility. So when you looked at that penny, it split into a universe where you saw tails, another one where you saw heads, and so on. This means there is an almost infinite number of me out there, which is cool. It also means there is an infinite number of Arsenio Hall out there, which is not. And it doesn’t really explain why that happens in the first place, which makes me think this theory is a suckola piece of shit. 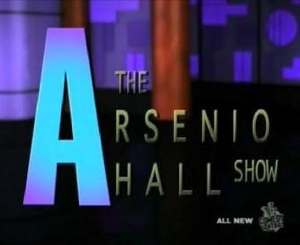 Another suckola piece of shit.

Here’s a fun alternative explanation. Let’s say I make my living designing and programming violent video games, and I’ve begin work on an first-person shooter called Everyday Life In Detroit. When the player is shooting up a taco stand downtown, the program does not have to worry about what’s going on in the suburbs. It would be a huge waste of memory to continually calculate what is going on everywhere all at once, so the program would be written to only be concerned with what the player can see.

Think about that. That’s kind of like what our universe is like, isn’t it? Shit doesn’t get calculated or worried about until we look at it. The idea that we may be living in a giant computer simulation isn’t just considered by the type of person that bathes in large vats of LSD either. Folks with their heads right here on planet Earth consider it as well, like Nick Bostrom, a real live PhD from Oxford University who claims that we are almost certainly living in a simulation, which once again proves that the best drugs are to be found on college campuses.

(A lot of people may find this theory too much like the Matrix for their liking, but I’m a-ok with it as long as the Matrix really does contain Trinity with those spray-on leather pants. Hey Trinity, I’ve got The One for you, right here!) 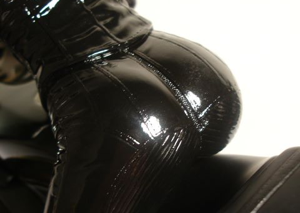 We don’t notice any of this shit because it doesn’t really become apparent until you start dealing with really small shit, like leptons, and other things that only people with more degrees than dates concern themselves with. This is the world of quantum mechanics, of which physicist John Wheeler once said, “If you are not completely confused by quantum mechanics, you do not understand it.”

So what does this mean to you, the average reader, who normally doesn’t care about this kind of stuff and picks their nose on the drive home from work? Not much, although you may be very interested to know this:

If no one looks at Arsenio Hall, he doesn’t exist. 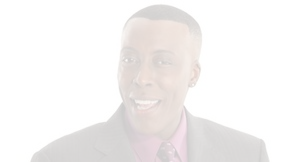 Luckily, the Arsenio Hall Show pretty much assures us that no one will be watching Arsenio Hall.