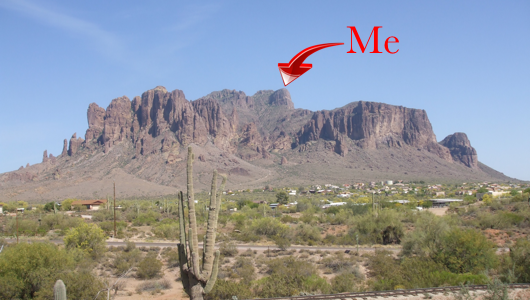 I climbed a mountain yesterday. Seriously. Had you told me twenty years ago that I would climb a mountain, my twenty-something year old self would have asked you if they were giving away free drugs at the top. Unfortunately, they weren’t, because I could have used them today. My arms and legs feel like someone broke them off, used them to beat a wildebeest to death, then reattached them to my torso without using anesthetic. Who knew climbing a mountain would involve exertion?

The Superstition Mountains (that’s them above) were regarded as sacred by the indigenous peoples of this area, and having scaled them myself I think that this was nothing more than a work avoidance device.

Native America Woman: Look, we live in a desert. It’s hotter than balls out here, and we’ve got three teaspoons of water to make it until next month. It’s so hot that your daughter blew a coyote for the moisture.

Native American Woman: And we need to find some fucking water! Look, if you climb to the top of that mountain, you could look around and see if there are any lakes around here. You haven’t bathed in years, and you smell like a diseased bison’s ass. We need water!

Native American Man: Sorry, those mountains are sacred. I wouldn’t want to offend the Gods.

Native American Woman: Oh, for the love of… Ok, well could you at least go gather some…

Native American Woman: You don’t even know what I was going to ask you to gather!

Native American Woman: Thank you. I was going to ask if you could go gather some flat rocks for me to…

Native American Woman: AUGH! My mother warned me about marrying you, Dances With Laziness! 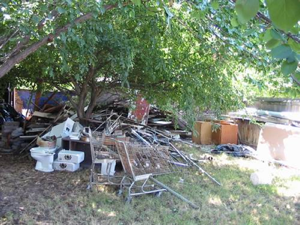 “Well at least clean up the trash in the yard. The neighbors have been…”
“Sacred!”

At least when I got home, I had another unsolicited email to distract me from my aching muscles.

They also have a million dollar contest called the $1,000,000 Team Leader Challenge Contest. Here is a link to the press release.

That’s pretty amazing, if you think about it. A business that paid people to find mistakes on the internet would have to have some seriously deep pockets. I could clean them out just pointing out the flaws on the Scientology website alone.

Wow, I hadn’t heard of that! That’s fucking amazing! Incredible! I cannot find the fucking words to express how totally fucking mind-blown I am at receiving this news. If I were to train for the next twenty years to become an astronaut, pilot a spaceship to Mars, land on its rocky, barren surface, only to find a fucking Tupperware convention going on, I would scarcely be more astounded than I am at the world-changing news that you have dropped right into my proverbial lap. I am skull-fucked with surprise.

One time I suspected that my high school girlfriend was sleeping with a good friend of mine, so I waited until she was at cheerleading practice and broke into her house. Hiding in her closet I soon heard her enter and spying through a crack in the door I saw her fall to the bed in the embrace of not my friend, but a weatherman for a local news team! Stunned, I watched as they disrobed, and began to have sex right in front of me. Finally, I could take no more and I burst through the closet door and let loose with a double-barrelled shotgun. When that guy got hit in the taint with two shell’s worth of rock salt, he was less surprised than I am right now.

What’s next? What other, life-altering news am I going to receive today? I find myself giddy with anticipation, yet my nerves rattle with dread. What if this is all a pleasant dream, and I awaken to a nightmarish reality, a broken hellscape of failed aspirations and ruinous bad fortune? A website that pays cash reward for errors found on the internet, you say? GET THE FUCK OUT OF HERE!

On to what happened the last couple of weeks while you were having your mind boggled by offers from the Nigerian royal family.

I was looking over my site the other day (which is something I do when Bavarian donkey-porn gets boring) and it dawned on me that I’ve got links to the official Dogs on Drugs Comment Hall of Famers home pages, but we know very little about the people themselves. So, starting some time soon (read: when I get off my lazy ass and actually do it), I’m going to create a profile page for each of these people, detailing their lives as I see them in that rum-soaked sponge I call a brain.

Now, this may cause more than a couple of you some anxiety. Never fear! As long as I receive the agreed-upon payment (non-consecutive, unmarked twenties, please), I will be kind with my words. If I do not receive the payment, well, suffice it to say that the words “secret hermaphrodite” will come into play.

(A note to the people involved: Before you do something rash like burn the evidence or have the witnesses killed, realize that in accordance with my long-standing policy, I will refrain from using actual facts. So nothing I have learned about your filthy perversions in real life will be revealed. )

It is a new week, everyone. Go out there and tear it a new asshole.